2014 has been a very busy year for automakers. Facelifts upon facelifts and power variants of their stock models have invaded the car market. We have seen the likes of Ford Fiesta ST, Mini Cooper S, Renault Megane RS and Peugeot 208 GTi release the performance oriented versions of their hot-hatches for their audience, but it makes us wonder… is there anyone else left to enter the game? 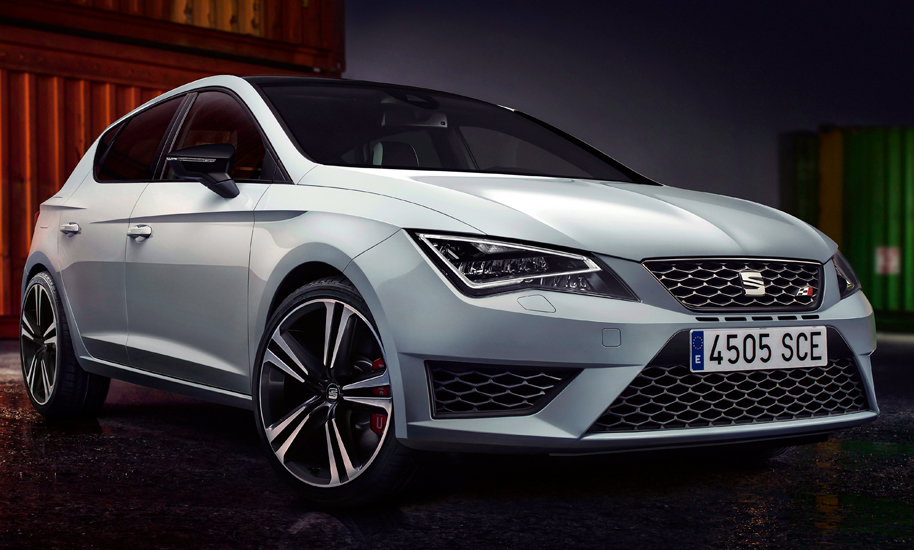 Why, yes, it’s Seat! We all know the brand and in the past it produced some nifty cars, especially the Leon. For this year, the Spanish car manufacturer has introduced a more powerful example of their great looking car, the Leon hot-hatch, bearing the Cupra badge.

Being owned by the VW Group does have its advantages, and it certainly shows. Many mechanical components are shared with the Golf GTi, including the 2.0 litre turbocharged engine. However, its power has been increased significantly – in its most potent configuration, the Seat Leon Cupra develops 276 bhp! With a front wheel drive! Madness!

The Seat Leon Cupra can seriously pack a punch and Seat took advantage of that. The greatest achievement of the Cupra is lapping the Nurburgring Circuit in precisely 7 minutes and 58.4 seconds, setting a global record for front wheel drive cars. It is certainly nothing to sneer at, considering that the previous record was held by the Renault Megane RS Trophy with 8 minutes and 07.97 seconds!

Matched against the previous generation, the Seat Leon Cupra has changed a lot. Gone are the curves and the chubby image that characterized it; now, angles and straight lines have taken its place. Visible in its whole range, it seems to us that the Seat Leon Cupra embodies this style change the most. Starting from the sharp headlights, the sculpted front spoiler and the angular, diving nose, it is clear that we are not in Kansas anymore. The side of the car also reflects the change, its shoulders being constructed only from razor-sharp lines, the only roundness coming from the wheel arches. The window outline is the only thing that is reminiscent of the past generation, as it’s easily recognisable as belonging to a Seat.

Compared to the present model it is based on, there aren’t that many differentiating elements, but to its credit, it does look better and more desirable that the Peugeot 208 GTi, with its peculiar front end.

At the front, the grille has a satin black finish, with a small chequered flag emblem in its left corner. The spoiler has increased in size, together with the air intake dimensions. Their design resembles those from the older generation Ford Focus ST, but perhaps that is just a coincidence. The sides don’t feature any changes, apart from silver 18 inch alloy wheels for the 265 Cupra and polished 19 inch alloys for the top of the line 280 Cupra. The rear section houses a larger roof spoiler, a Cupra badge and a set of twin, oval exhaust tips.

The overall impression of the Seat Leon Cupra is that of looking very good, even better, dare we say, than the Golf GTi. Perhaps it is the symphony of straight lines and sharp angles that makes it into a much more visually pleasing option than some of its competitors. The short, sharp nose ends just above the front honeycomb grille. The central air intake is massive, even compared to that of the stock Leon. From the exterior, it exudes power and cleanliness, due to its non-complicated design. Really, you won’t find anything that doesn’t fit – no ugly and over decorated spoilers, no flamboyant body kits with fake air intakes (we’re looking at you, 2012 Leon FR!)…

In the interior, as with the outside, the changes are minimal. The steering wheel is new, with a flat bottom part and a restyled shape, decorated with the same chequered flag as the front grille. The front seats are very nicely contoured, offering excellent lateral support and create a strong visual impression when seen for the first time. Other than that, a few more Cupra emblems through the inside, and that’s it for the changes.

The Seat Leon Cupra is offered in two power stages – the first is the Cupra 265, which has the same amount of horsepower that the name implies (three door configuration, manual gearbox), and the top tier Cupra 280, which, you guessed, fits the same description, but has either a 3 or a five door configuration, with a choice between an automatic or a manual. The engine is a turbocharged 2.0 litre TSI petrol, courtesy of the WV Group. A limited slip differential and other electronic controls are present on board to make sure that all that front wheel drive power doesn’t go berserk and conforms to the driver’s intentions. Unlike the Golf GTi, it has adaptive dampers as standard, so you won’t have to spend more to get them. On the road, it feels like a beast. The steering is sharp and what’s impressive is how the front end is capable of successfully harnessing all that power.

Taking into account that the German group is behind the Seat badge, all its know-how and technology has been transferred to the brand. A common platform means that the Leon and the Golf share many components, so reliability shouldn’t really be an issue. The Seat Leon Cupra itself got a full five star rating for the Euro NCAP tests, complying to all safety regulations and over -perfoming the Ford Focus.

The Seat Leon Cupra comes with a price tag ranging from £25,690 up to £28,525, depending on what variant you choose. The three door 265 Cupra promises a combined mpg of 42.8 and the 280 Cupra, 44.1 mpg for the automatic and 42.8 for the manual, in five door configuration. Quite pricey, but performance always comes at a cost!

The Cupra comes in both three and five door configurations, which means that whoever owns it will not feel disadvantaged that his or her favourite car producer has imposed a certain limitation to it, by offering only one type. The boot space is 380 litres deep, expandable to 1.210 by folding the back seats. Keep in mind, however, that the five door variant is longer than the three door one with 52mm, consequence which will be felt, primarily, by the passengers in the rear.