The 2014 Peugeot 208 GTi model had a gruelling task: that of filling the shoes of its older sibling, the legendary Peugeot 205 GTi and, not to mention, to clear the memory of the previous two iterations to bear the three letter badge (206 and 207 GTi), which have not been among the most praised super minis. Even on its official UK website, the French manufacturer makes a direct reference to the 205 model, stating that the newly introduced brother is here to continue its legendary character. “Excitement is back. GTi is back”, says Peugeot. 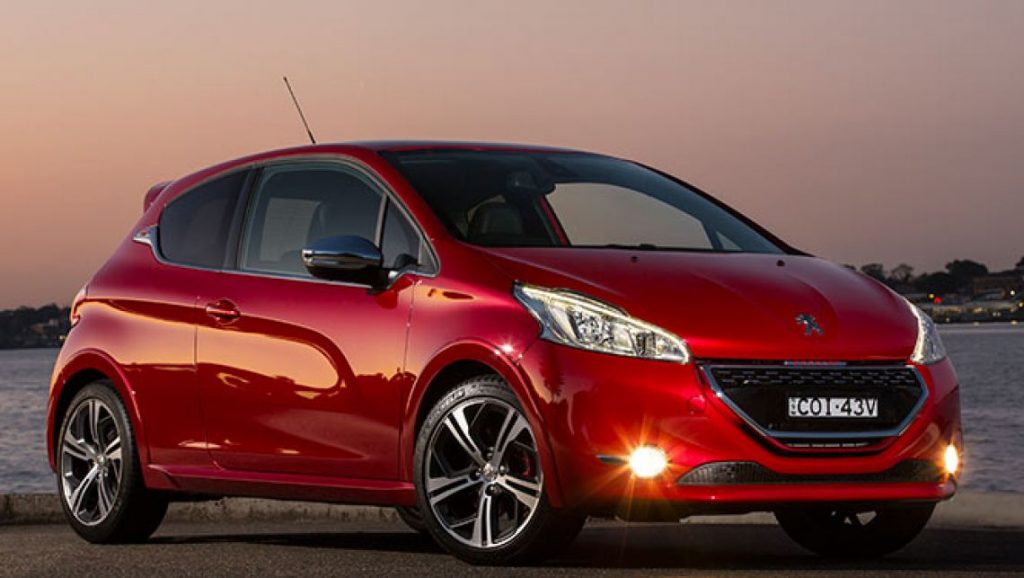 Designed to face opponents such as the Fiesta ST or Mini Cooper S, the latest hot-hatch also faces competition from its place of origin – the Renault RS 200, another incarnation of a highly successful mini racer.

Let’s see what the car bring to the table, shall we?

The situation under the bonnet is very similar to what we have seen with the Renault RS 200: a 1.6 litre turbocharged petrol engine, developing 200 bhp powers the Peugeot 208 GTi, while the official Renault UK website states that the carbon dioxide emissions clock in at 139g/km, 5g less than its French competitor, while the 62 mph mark is hit after just 6.8 seconds. Not too bad!

Mechanical character aside, when compared to its other rivals in the niche, the new Peugeot 208 GTi loses in terms of visual appeal. The front end will hardly be called beautiful by anyone’s standards, but it’s certainly interesting in its peculiarity. The grill is different from the stock model and it has been designed to look like a chequered flag and bears, just underneath the nose, Peugeot lettering. 17 inch alloy wheels along with beefier tires grace its drive train, while larger brakes and red painted callipers take care of adding both detail and functionality to the car. The GTi logo is present both in the back and just behind the rear windows and it also sports a roof spoiler and a split sport exhaust.

In the interior, everything is dominated by a contrasting black and red scheme. Numerous red details on the dash, seats, doors and led strips (also red!) around the instrument panel complete the sporty appearance of the hot-hatch. The steering wheel is smaller than standard, to enhance the driver’s experience and the gear lever is made of brushed aluminium. The front seats are very well profiled and give the impression of hugging you, providing excellent lateral support even in tight bends.

Only available as a three door version, it is on par with offers from the competition, save for the RS 200, which comes in a five door configuration. However, the Peugeot 208 GTi doesn’t feel cramped in the least, the space on the rear seats being more than enough, even for tall passengers.

Perhaps betting on the “The devil is in the details” saying, Peugeot’s designers have decided to do little work in differentiating the performance variant from its stock brethren. Minimal changes, maybe too minimal, prevent this car from being hailed as visually attractive – but this fault does not reside only in the Peugeot 208 GTi model, as the base version is, similarly, not visually arresting. We would have preferred a tad more “oomph” from the French manufacturer, because the competition put far more emphasis on exterior appearance than in the present case.

Benefitting from over 203lb ft or torque, this is a small rocket on the road. The driving experience is augmented by the zippy 200bhp turbocharged engine and its reduced weight. What is really interesting is Peugeot’s choice of going with a manual six-speed transmission instead of an automatic one, which seems to be the norm today. The Renault RS 200, for example, has only a twin-clutch paddle shift option, while here, the manual is the way to go. Swimming against the tide, perhaps?

The driving experience is…bland, to say the least. Although the GTi badge is supposed to signify sportiness, in this case it missed to do so. Turbo lag manifests itself too often, having an irregular and unpredictable character. The engine, although shared with others from the Peugeot PSA Group, does not live up to expectations and does not impress through anything, being too “calm” for what it’s supposed to be. Although it has the same engine as the RCZ, the exhaust note is also a disappointment, as it does not rattle your ears when revved, but it rather delivers a subdued noise.

In the past, if you wanted to make fun of the reliability of a car, you would refer to either French or Italian made vehicles. Jokes aside, Peugeot is no exception. In recent years however, its reputation has vastly improved, as the Group’s priorities shifted and the quality and longevity of the products increased. More rigorous testing sessions take place, as well as a more thoroughly thought out quality control process. Still, considering that the Peugeot 208 GTi is based on the stock model, it should be as dependable as its brother. Peugeot gives 3 years of warranty, including its own, 365 days per year, breakdown assistance service, Peugeot Assistance.

The UK price is quoted by Peugeot to be around £18,900 for the standard Peugeot 208 GTi and £19,750 for the GTi Prestige, the more option loaded variant. Official fuel consumption figures state 47.9 mpg, combined drive cycle. As usual, expect a little bit less.

As mentioned before, despite the fact that it comes only in a three door configuration, the back seat will offer enough space even for tall passengers, while the leg room is sufficient even for a lengthy drive. Boot space sits at 285 litres – a bit modest, but it can be extended to 1.076 litres if the backseat is folded.