What happens when you take an iconic Fiesta and you give it even more oomph? You get the Ford Fiesta ST

The most dramatic change that Ford has made was to remove the signature a-la-Aston grille and replace it with a blacked out, mesh one that has the Ford Fiesta ST badge in its left corner. The car not only looks better, but its front fascia seems more menacing. Underneath, the spoiler received a more aggressive makeover – the little “smiling” intake beneath the grille being reversed and painted black and the fog lights have been give new housings. Overall, the car seems to be grinning – perhaps at a competitor in its class? 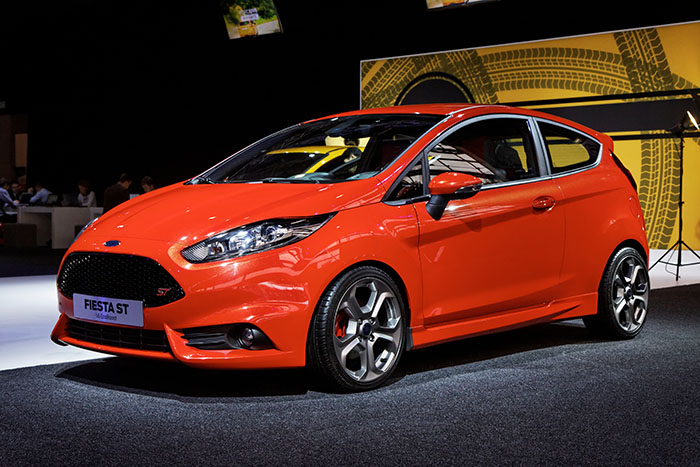 The body kit also includes restyled side skirts, a new roof spoiler, twin exhaust and an air diffuser painted in body colour. 17 inch wheels come as standard and, a first for a Fiesta, it has disc brakes all around!

The power comes from a 1.6 litre turbocharged EcoBoost petrol engine, developing 180bhp. Acceleration is quick and 0-62 only takes 6.9 seconds. Although the presence of turbo lag is still felt, it does not kick you in the back of the head when you least expect it – instead, it slowly progresses, making the engine one of the best when it comes to linear power delivery. As opposed to the UK, in the US the Ford Fiesta ST is advertised as having 197bhp. But why, you might ask. Well, Ford had added a little gimmick to the model, under the form of a turbo boost function, which will increase power from 180 to 197bhp for 15 seconds. The British legislation is stricter and doesn’t allow the advertising of this function as being the “true” power output, so the manufacturer had to stick to the 180bhp figure. Although the ST may seem behind the RenaultSport Clio, Peugeot 208GTi or Mini Cooper S on paper, on the road, the difference may not be as much of a hindrance as it might seem.

The interior has also received a slew of modifications. The most obvious change comes in the form of a two-tone paintjob for the seats. In the front, Recaro sport seats take care of the driver and the passenger, providing excellent lateral support; less so with lumbar – one might feel some discomfort after long periods of continuous driving. The steering wheel is dressed in leather and has received a small ST badge, while traction control has gotten a special button.

The pedal assembly is now made of alloy, while the gearlever has received the same cosmetic makeover. Sat-nav, heated seats, cruise control and a keyless start system complete the standard offer.

The aggressive body kit fitted on the car makes it stand out, especially when the colour is a striking one – such as red or orange. As described prior, the large, black honeycomb grille with an Ford Fiesta ST badge on it replaces the chromed one in the stock model. The spoilers are larger, more profiled and sit closer to the ground, while the overall shape of the vehicle has suffered a welcome change for the better – its lines seem to flow better. The dual exhaust is very well integrated into the rear air diffuser and it makes a fantastic sound when the engine is revved.

Aside from the two-tone interior, new Recaro sport seats and some minor tweaks, nothing major has happened in the cabin. The front seats are heated, but cannot be adjusted by tilting them – some might feel that the feature was necessary, but it was a compromise Ford has made as a sacrifice for sportiness.

Benefitting from a stiffer suspension, an improved steering and a lowered chassis – the car sits now 15 mm closer to the ground – the Ford Fiesta ST is a joy to drive. Its sporty character is visible throughout, the ride being firmer than in a stock model and the body roll reduced to almost nothing. 205/40 Bridgestone Potenza rubbers hug the 17 inch wheels, providing enough grip to allow you to push the car to its limits. The overboost function will please the ones with the soul of a racer – as long as they are able to find a sufficiently long stretch of road to try it on! As noted before, although the engine is turbocharged, the turbo lag is not violent, but rather comes progressively, enhancing the driving pleasure even more.

As with the regular Fiesta, the ST is a reliable vehicle. Considering that no major modifications have been made in order to alter the essence of the car, the ST remains one of the most dependable cars on the road today. The optional power increase from tuner Mountune is covered under Ford warranty, so if the mechanical components happen to have an issue, the problem will be taken care of.

The Ford Fiesta ST 2014 comes with a price tag of £16.995. Compared to its direct rivals, it offers the best value for money, despite its apparent deficit of power. Mountune offers, under the blessing of Ford, an optional tuning package for the engine, offering an extra 33bhp for only £599. The best part is that you can enjoy an increased power output and still keep the standard manufacturer warranty. Fuel consumption sits at an estimated 47.9mpg on paper, but expect a slightly different figure on the road.

The 2014 Ford Fiesta ST only comes in a 3-door setup, which means that some interior space will be sacrificed compared to the stock 5-door version. The boot space is rated at 290 litres, while folding the back seats expands it to over 974 litres, which is more than decent. Various partitions and slots in the car will take care of the storage of small things; the glove compartment is quite spacious and can accommodate large things with ease. Although the Recaro front seats may seem a bit bulky, legroom is still plentiful for the passengers in the back.

Want to know more about the Ford Fiesta ST? then click here.

Ford Fiesta 2014 Review Buying a car? Tips on what to look for.