The hot-hatch market is one of the most competitive niches in the automotive world and whoever is the top dog will end up with the laurels – and the money – at the end of the day. From this very reason, numerous manufacturers battle to promote their latest mini racer, upgrade it and fit it with the latest innovations in the hope that it will outperform the competition. 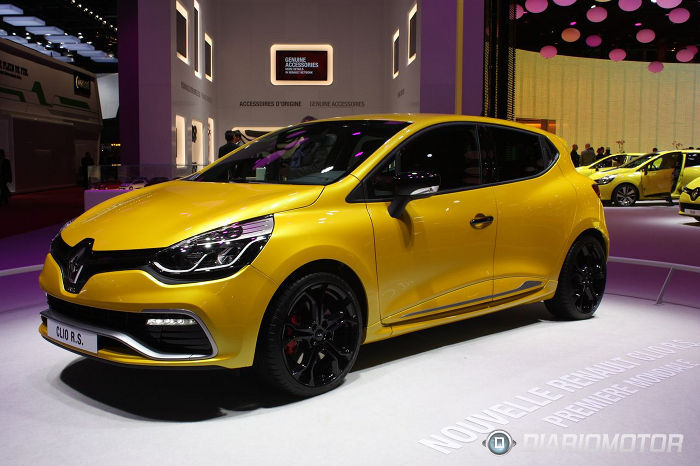 We have seen the Americans from Ford with the Fiesta ST, the British contribution from Mini with their Cooper S and now it’s time to check out what the French have to offer. Without further ado, we present to you the Renault Clio Sport 200 EDC Turbo. Quite a long name, isn’t it?

The latest Renault Clio Sport model is arguably, one of the best looking small sized cars ever to come from the Hexagon, bringing a much needed breath of fresh air from the French manufacturer. Take that one step further and you get this – the Renault Clio Sport RS 200 Turbo, the performance variant of the stock model. Taking a look back in time, the older RS suffered from a conventional and dare we say, bland design, excelling only when it came to the mechanical side. However, that hindrance has been resolved with the introduction of the 2014 version, a much better looking mini racer.

Many changes have occurred since the past generation: the car now comes in a five door configuration, as opposed to three, its engine is now turbocharged instead of being naturally aspirated and instead of having a manual transmission, now offers a dual-clutch gearbox.


Visually, it’s very aggressive. Although it comes in five door configuration, the overall design gives the impression that it’s much more compact; the hidden door handles (found in the black C pillars) certainly have their role. The front of the Renault Clio Sport now has redesigned headlamps, while a black line connects them to the nose, which bears a large Renault logo; underneath it resides the RS inscription. The air intakes, which have LED day-time running lights, seem to be grinning at you. Clean lines seem to characterize the sides, as nothing drastic appears to interrupt the flow of light on the car. The shoulder line starts from just above the rear wheels and continues to the back, where it encloses half of the rear lights. The roof spoiler, larger and having a new design, improves the aerodynamic profile of the vehicle. The rear lower spoiler gives the impression of being very wide, and it holds a large air diffuser, with two exhaust tips incorporated, on either sides.

A clear departure from tradition, the Renault Clio Sport RS 200 now fits the “hot-hatch” description. The front end has an almost reptilian appearance, with its peculiar shaped headlights. The spoiler houses the large air intake that spreads its entire length. On either side, black plastic housings contain a set of LED day-time running lights, which give it a distinctive character at night. The large, diamond-shaped Renault logo with the RS logo beneath it is large, being the first element that your eyes will focus. The rear end is characterized by a large spoiler with an incorporated air diffuser and a double exhaust.

In the cabin of the Renault Clio Sport, the atmosphere is welcoming, although the rather high driving position does not exude too much sportiness. The instrument cluster is made of two large dials, one for the tachometer and the other one for the fuel level, while an elongated oval serves as a digital speedometer. A 7-inch screen, together with a large steering wheel with an RS badge and coloured accents differentiate it from the stock model.

If there was a gripe we had with this car, it was its springs. Although the RS badge means that it’s supposed to have a different character from its non-modified version, the engineers have perhaps gone too far with the stiffness of the dampers, which means that you will feel most of the bumps on the road. The 1.6 litre engine, even if turbocharged, delivers a very smooth power spread, as the turbo lag does not kick in unexpectedly. The fans of the naturally aspirated model will probably reminisce about the good old days when no turbo was present, but the decisions are taken with the mind, not with the heart. Brand purists may feel that an automatic gearbox with paddles doesn’t do justice to the car, but that is the offering that now comes from Renault.

The 2014 RS model brings in a lot of expertise and know-how from the French car maker. A brand new engine, developed in collaboration with Nissan, a new transmission and a novel exterior should pose absolutely no problems when it comes to reliability. As usual, new components mean that wear and tear has not set in yet and will not do so for some time. Of course, we recommend pampering your car, as human error may lead to malfunctions, as in any other field.

With a price of £18,995 incl. VAT, the Renault Clio Sport is a very good choice, offering value for money. The official Renault UK site rates the mixed fuel consumption at 44.8 mpg, while the carbon dioxide emissions sit at 144g/km. We expect on the road figures to be slightly different, because the official estimates tend to be a little optimistic sometimes. Of course, the individual driving style of each of us will, no doubt, have an influence over the figures.

As opposed to other hot-hatches, the Renault Clio Sport comes with a five door configuration. From the start, that means that the passengers in the back will have not only more legroom, but also an easier way to access the seats, without having to fold the front seats to get in. The boot of the car, at 300 litres, is not something to be ashamed of, but it could have been better. However, considering that it has a sporty pedigree, we will forgive its designers.

If you require further information on the Renault Clio Sport click this link.