Characterized by the large grille, signature Mercedes headlights with LED trakes and the angry grin, the new Mercedes A-Class looks nothing like the mini-mpv design that preceded it.

Some might like it, because it now looks like a proper rival for the BMW Series 1 and the Audi A3, while others might feel nostalgic for having lost the more compact and easy to park nature of the old generation, but this is how design evolves.

A visual analysis of the car’s exterior brings out its main selling points.

First, the long snout, as the whole car, in fact, sits closer to the ground, as its center of gravity has been lowered. The grille, with the large tri-star emblem in the middle, can have one or two horizontal chrome trakes – or neither – as it is fully configurable. The sharp headlamps contain, each, a subtle streak of LED’s that serve as day running lights and further underline the car’s character. Moreover, their design root stems from the large S-Class, whose overall lines lead to a complete redesign of the entire range, which looks rather bland, if we’re to be critical, but who can argue with the brand?

Lower still, we can observe the two large air intakes that flank the central gape that houses the radiator. The vents are purely cosmetic on some version, because they do not serve any function besides looks, as bits of black plastic in the shape of a mesh cover them.

The side profile now resembles a proper hatchback, with a longer front end and super compact rear overhang. The window line dips towards the rear, resembling the dynamic contour of the estate C-Class. On one hand, it contributes heavily to the modern and fresh look of the vehicle, but on the other hand it limits the visibility of the rear passengers, so you should be prepared for this compromise. 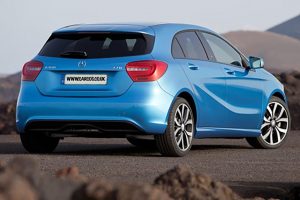 A low profile window sits in the back, while a roof spoiler increases the aerodynamic efficiency of the car. Other things to note are the rear lamps that protrude into the hatch and the twin exhausts.

Should you be looking for a speedier version, the top of the line A45 AMG 4MATIC offers a more dynamic exterior package (front and rear AMG bumpers, side skirts and a more distinctive rear end, with integrated air ducts) and a more powerful, 360 bhp 4 cylinder engine coupled to a 7 speed DCT transmission. Base price for the AMG A-Class starts at £37,345, so be prepared to fork some cash for your latest toy. 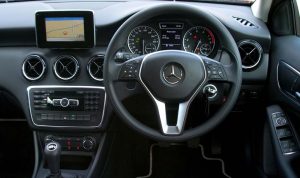 Inside, the cabin resembles some of the Mercedes A-Class’ larger brethren, including the super sport AMG GT due to the common design of the circular air vents and the arrangement of the dashboard and central console. A large instrument cluster provides the driver with the most vital information it needs, while the multifunctional three spoke steering wheels ushers feelings of sportiness. Add to that the lower driving position and you’d think you’re in an entry level coupe rather than a hatchback. Until you look in the rear view mirror, that is. Speaking of which, the small window limits your visibility in the back, making tight parking manoeuvres a bit tricky. 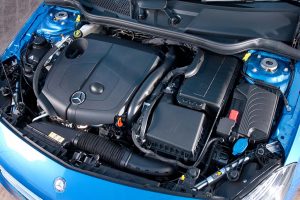 As previously mentioned, the new Mercedes A-Class has a lower driving position, but unless you will buy the AMG version, it will seem quite a tame machine. For starters, the ride is extremely comfortable, and if you stick to the smaller stock wheels and don’t go for the larger, flashier ones, you will not have a sore back at the end of the day. Furthermore, the A’s, except for those with the 4MATIC four wheel drive system, are all front wheel drive, so you will not get the same driving sensation you would get, for example, in the rear wheel drive 1 Series from BMW, but the experience is comparable to the one offered by the Audi A3. Save for the AMG –again – the competition offers better performance figures for the base models. 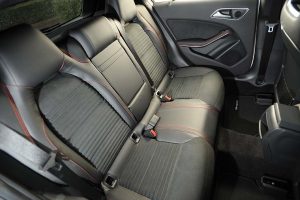 Aided by the maker’s reputation, the A-Class sits on a quite decent position in various surveys concerning build quality and mechanical issues. However, despite the fact that the cabin does feature new materials – soft-touch ones being the most prominent – the lower portion of the vehicle, especially around the central console and other areas not directly visible, feature hard plastic. The downside is that after some time, that may start to become loose and vibrate, producing unwanted noise.

In terms of safety, the Mercedes A-Class scores five stars at the Euro NCAP tests and it comes standard with a host of airbags, ABS and an electronic stability system. An interesting application is called Driver Assist, that assesses via a slew of sensors you current condition and should you display signs of fatigue, it alerts you by an audio signal, in order to prevent you from falling asleep at the wheel. 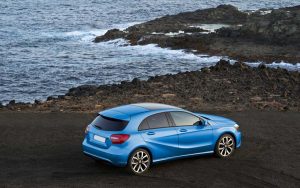 The cheapest Mercedes A-Class is the A180, starting at £20,045. For that price, you’ll get a 4 cylinder, 1.6 litre petrol that develops 122 bhp and boasts a 51.4 mpg fuel economy (mixed cycle). A 6 speed manual comes bundled as standard for that version. For those of you who favor a more efficient mpg figure, the A180 CDI, the entry level diesel engine, represents the most suitable option, as it promises no less than 76.3 mpg. A four cylinder, 1.8 litres, 109 horsepower power plant, connected to a 6 speed manual, is what drives the vehicle. Sure, it’s not the fastest thing on the road, but those of you who will buy it will not do street racing with it. Another bonus is that at 92g/km in CO2 emission, it’s free from road tax. 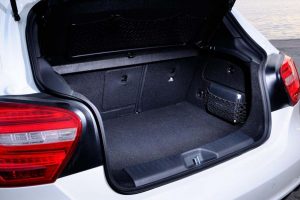 Although there is plenty of room in the front, the rear passengers might feel a bit uncomfortable, especially if they are tall, as the low roofline and the dipping rear windows offer little headroom. Moreover, regardless of the fact that the front seats have a sculpted back, legroom may be a problem if you plan on leaving on a long journey, so do mind this aspect. Boot space, with the seats up, measures 340 litres, while folding them brings the total to 1,157 litres.

On the upside, the A-Class comes in a five door configuration regardless of trim level, making getting in and out a bit easier than some of the three door rivals.

Need to know more about the new Mercedes A-Class? If so, click here.