The smallest member of the BMW range, the BMW Series 1, has sold in over two million examples since its introduction on the market, in 2004. Visually, it doesn’t strike as been particularly gorgeous, a trait that has lingered on since the car’s inception, but we’ve seen worse and honestly, it all comes down to personal preference.

The latest model features a front end that is instantly recognizable as being part of the BMW family, as the large kidney grille and the wrap-around headlamps give it a distinct appearance. Underneath, the front bumper is characterized by a central lip and two separate air intakes with integrated fog lights.

On the side, the profile has not suffered major alterations, as the design was kept mostly the same, with only minor tweaks to give it a more refreshed appearance. If you look closely at the front wings, you’ll notice a resemblance to the ones on the 3 Series. This is a common process done by the majority of the manufacturers, with the primary goal of unifying design traits and creating stronger brand recognition; although a somewhat commendable effort, individuality is lost to some degree by doing so. The character line running from the front wheel arches up to the tail of the vehicle is strongly profiled, with the door handles sitting inside its crease.

The rear is also familiar, as the tail laps have received a new glass cover and a slightly modified shape. A common complaint about the BMW Series 1 was the relatively small size of the rear window, which – you guessed – has remained almost unchanged. Below, a single exhaust pipe, embedded in the architecture of the bumper. A curious “option” is the ability to remove the model designation etched on the rear of you vehicle, for which you have to pay £0. 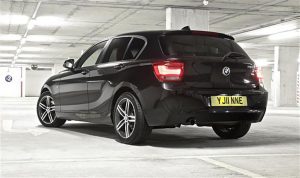 The top of the range M135i receives some appeal by the appearance of an M body kit, which includes new front and rear bumpers, side skirts, a dual exhaust setup and badges all around, including on the interior. Exclusive, 18 inch double spoke M design wheels complete the package. 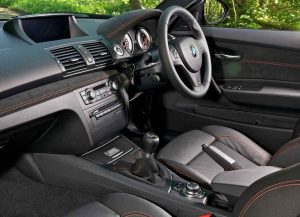 A pleasantly surprising aspect of the new baby BMW is the interior. Artifices of style are kept to a minimum, leaning towards a minimalistic approach. The dashboard and centre have design traits shared by the bigger brothers, including the 6 Series. Materials have received a most welcomed upgrade, so as to preserve the premium image of the brand; hard plastic surfaces are no longer present, as soft touch versions derivatives have taken its place. Cloth upholstery comes standard, but leather is available as well, for £1,150, as well as aluminium (£220) and fineline Stream wood (£290) trims. The brush shed aluminium trim really does stand out and it gives the cabin a more upscale look, while the wood trim seems a bit out of place. 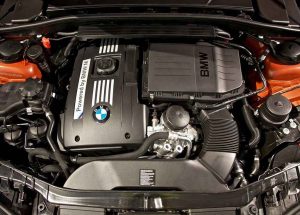 Perhaps its strongest point, driving experience is outstanding. Marching on the fact that it’s the only car of its size in the hatchback segment to offer rear wheel drive, the BMW Series 1 promises to bring the manoeuvrability of its larger brethren in the compact segment. Benefitting from independent suspension, which can be electronically adjusted, it filters the road’s imperfections much better than its previous iteration.

Stability in the corners has also improved, outdoing its closest rivals, the Mercedes A-Class and the Audi A3. Choose the top of the line M135i and you’ll never look back! Moreover, the steering wheel is adjustable, as are the front seats, but a downside to them is the fact that they are not very soft and comfortable, thus unfit for long journeys; on the upside, they provide stellar lateral support. 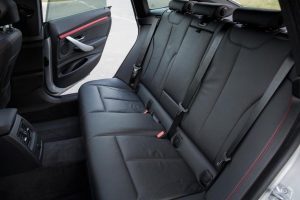 While the previous version was not bestowed with the cleanest reputation in the automotive world, the latest iteration might wash its sins. Customers that have bought it have reported only minor issues, meaning that the quirks of old have been sorted out.

The car has also received a full 5 star safety certification from Euro NCAP, comes with four airbags as standard and has a start/stop system included, regardless of trim level. Furthermore, more advanced safety features such as auto braking and lane departure warning are available on request. 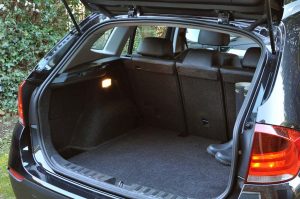 A host of storage spaces are available in the interior, starting with the roomy glovebox compartment, door bins, a small, concealed space near the steering wheel and a spacious box situated under the (optional) armrest. Boot space measures 360 litres with the seats up and up to 1,200 with the second row folded. The driver and front passenger will be the happiest, as they benefit from enough freedom of movement and space, but the persons sitting in the back might not feel so fortunate.

Legroom is quite restrictive, as the front seats intrude on the comfort of the ones from the back seat and due to the car being rear wheel drive, the centre seat occupant will have to sprawl his or her legs as the transmission tunnel’s footprint is considerable.

Thirsty for more information on the BMW Series 1? Take a look here.