For 2014, Volkswagen decided to refresh the image of its popular Beetle. The reason why it did it? Well, despite the fact that the previous iteration of the model sold in decent numbers, it seems it didn’t appeal too much to the male population. This year, however, the new VW Beetle Sport comes to save the day (and the sales) by acquiring a new, more dynamic design, with fewer curves than the old version and with a zippy engine borrowed from the Golf GTI. 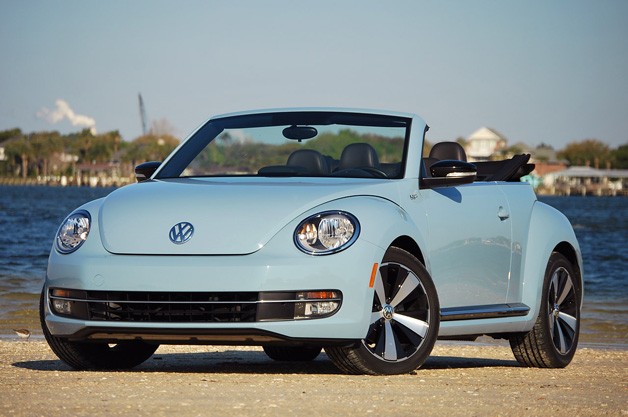 The overall look is flatter, ditching the overly round curves of the old generation; not to say that it doesn’t have any – it does, but straight lines are also thrown in the mix – for men, apparently. The roofline is lower and sharper, the bonnet swoops more and is flatter, while a very nice set of two-tone 18 inch alloys dubbed “ Twisters” are available as standard.

On the whole, the dimensions have increased, the VW Beetle Sport now being 84mm wider, 152mm longer and 12mm lower than the previous iteration and that gives it the impression of having a much more imposing stance than the generation it replaces. Inside, the cabin also suffered a redesign, as the feel is much more premium now. Rivals such as the Mini Cooper have taken a few steps towards delivering to customers more than they expect, so it was about time for VW to make a move in that direction.

The front features the flat bonnet, the round headlamps, which seem to have a black backdrop and the wide air intake in the front bumper. We don’t have an actual grille, just the Volkswagen badge in the centre of the hood. The signature wheel arches are still there, while the sides are characterized by a nicely designed window line, which is not a conventional semicircle, but a “broken” one, as the windscreen angle disrupts the flow of the half-arc and it looks very good if paired with tinted windows. In the rear, a ducktail spoiler finds its place, with a stop light right beneath it, the remodelled backlights and the double exhaust tips on the left side.

At the time of writing, the base price for a VW Beetle Sport is £20,085, down from £22,085, but do keep in mind that the prices are subject to change. If you’re planning on snatching a VW Beetle Sport, now is the time!

The 2014 VW Beetle Sport comes with a fresh image, meant to appeal to both sexes. Its classic lines have been kept throughout, but a few retouches were made in order to give it a more contemporary look, in trend with the rest of the Volkswagen line. Larger and wider than its predecessor, it now appears to look more like a small sports car and not like a rolling bubble on wheels. Fit for him and her, the Beetle can now be proudly paraded through the city, as its lines look better than ever.

In the interior, the sports steering wheel with a flat bottom is noticeable right away. The dashboard is flat, continuing the retro exterior line, while the high tech dials seem to provide a perfect contrast. Overall, it looks more premium and if you choose the interior in a matching nuance to the outer colour, you will be surprised how much the atmosphere will change.

Although sitting lower now (12mm to be precise) the VW Beetle Sport is not exactly the pinnacle of driving pleasure. The suspension system is shared with the Golf, but somehow, it doesn’t feel as good – perhaps they have different settings? Body roll in corners is visible, especially when turning sharp and the bumps in the road were felt more than we would have liked. At high speeds, the wind noise is a factor that we dislike, as it tends to accumulate exactly behind the driver’s ear, and it’s not the most desirable feature in a £20,000 car. However, it wins points on the handling chapter; light and precise, the steering does its job tremendously well and it is as smooth as the Golf’s.

For starters, the VW Beetle Sport is new. There’s new technology, loads of testing and research and shared components with the other models in the Volkswagen Group, such as VW or Seat. The Beetle also gets a full five star rating at the Euro NCAP safety tests, so it should be a solid performer. On top of that, VW offers a three year or 60,000 miles warranty for the car, which means that you’ll be care free for that period.

The boot space, in the VW Beetle Sport, is 310 litres. Not the class leader, but then, it’s not meant to be and it’s better off than the Mini, with its 160 litres. If desired, the back seats can be folded and the space can be increased to 905 litres. In the back there are only two seats and minimal legroom, which means that the passengers may feel discomfort after a long drive. The headroom is sufficient, but you might risk hitting your head on the roof if you’re very tall.