The VW Golf GTI has become such an iconic car, that it hardly needs a presentation. Starting from the very first Mk1 edition and up to the latest, the Mk7 (the unit we are reviewing), the three letters stuck to its grille have awoken many emotions in the hearts of car lovers all across the world. And for good reason, too! The upgraded version of the stock model has delivered when it was asked to do so, was reliable – nothing can beat German engineering – and, if desired, it was capable of withstanding insane amounts of modifications, both under the hood and on the outside. 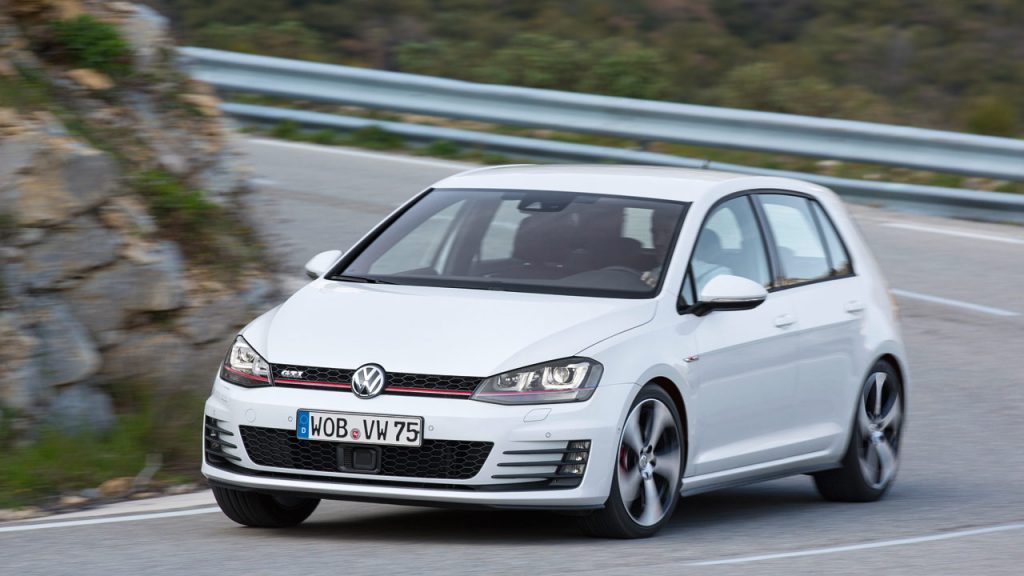 However, the Mk7 edition doesn’t stand out as much as some of its older iterations did; its styling is rather subdued and conservative and that, frankly, is our biggest gripe with it.

Based on the MQB platform, it means that it shares many of its components with the Seat Leon Cupra, but unlike the Spanish model, it has a significantly lower power output. At 217bhp, the 2.0 litre turbocharged engine is a far cry from the top-of-the-line Cupra, with its maniac 276bhp. However, the German car can brag with the Euro 6 emission compliance.

The Golf now sits 15mm closer to the ground, thanks to modifications to the suspension (MacPherson in the front and multilink in the rear) and, if desired, there’s an optional Performance Package, which includes a 10bhp increase, ventilated brake discs and an electronically controlled front locking differential. As for body configurations, it comes in either three or five door versions, which means that those who want a more practical car will be able to choose (which is quite nice, considering that some of the competition comes in either three or five door form). A six-speed manual gearbox comes as standard, but a dual-clutch automatic is also offered as an option.

For the more “economical” drivers out there, there is also a diesel version – the Golf GTD, which offers a 2.0 litre TDI engine, with 181 bhp. The advantages over the petrol engine include lower fuel consumption and more torque, but it loses on the horsepower aspect.

Visually, there aren’t many differences compared to the stock car. The front benefits from a larger spoiler, with a large intake decorated with black honeycomb mesh and on either site, two ridged intakes (a-la-Testarossa) replace the fog lamps on the stock model. The grille features the same honeycomb mesh as the lower intake, while a GTI badge sits in the right corner. A distinguishing element is the red line that sits on the lower portion of the grille and runs into the headlights. The sides feature only a small GTI badge just below the mirrors and slightly more profiled side skirts; apart from that, the clean lines of the VW Golf GTi Mk7 have not been changed. Finishing with the rear, a roof spoiler with an incorporated stop light sits on top, while the rear spoiler features two sport exhausts, one on either side. A small GTI badge sits on the boot lid as a reminder that this is no run-of-the-mill Golf.

As stated before, the VW Golf GTI doesn’t have a heavily “modified” image stuck to it, but then, that’s what tuner companies are for. On the outside, the large front spoiler with the black honeycomb mesh and the red line running across the grille and into the headlights are the biggest changes VW has made to the front fascia. The sides feature profiled side skirts and, on the back, a rear diffuser incorporates two exhaust tips, on the right and left side of the bumper. The roof spoiler, larger than on the stock version, has an incorporated stop light and the tailgate displays the GTI badge.

On the inside, we find the same predominant colour that’s featured on the outside – red. The GTI styled, leather steering wheel has a flattened bottom and red stitching. Tartan-themed seats come as standard, but there is also the option of fitting leather ones. Red accents are present throughout the cabin, even on the indicators, underlining the car’s sporty character.

Volkswagen said that they’ve made the car better, quicker and more comfortable to drive, but is there any truth in that statement? After a thorough drive, it appears so. The engine, an EA888, is at its third generation and in spite of having a lower horsepower figure than some of its rivals, the VW Golf GTi delivers a very smooth driving experience. The steering is light and, if fitted with the Performance Pack, it behaves even better, the optional front locking differential showing what’s capable of. Torque levels are more than satisfying and considering that most of it comes in the lower rev portion, it harnesses the power of the engine in a very progressive manner. However, as much as we like the character of the new VW Golf GTI, it simply isn’t as exciting as, say, a Leon Cupra or even a Ford Focus ST. The conservatism of the outside styling seems to have an equivalent in the engine department, as there is no real emotion and fun when driving the car.

Following a somewhat true stereotype, Germany is the country where half of the cars are grey and never break down…or almost never. The VW mother company is renowned for its attention to detail and the mechanical prowess of its vehicles. The new VW Golf GTI benefits from decades of experience invested in it and it does not disappoint. Receiving the full 5 star rating at the Euro NCAP safety tests and having Euro 6 emissions compliance, the VW Golf GTI also comes with a 60,000 miles warranty attached to it, so we wouldn’t be very concerned about a predisposition to mechanical failures.

The official VW figures for the Golf’s price start from £26,330 for the 3 door manual and end with £28,400 for the five-door automatic. An extra £995 will get you the Performance Pack. The mileage ranges from 47.1mpg for the manual to 44.1mpg with the automatic DSG transmission, which, on paper, is quite impressive, but we would advise you to be a little more reserved about the on the road conditions, as the figures may change.

Considering that the company offers the VW Golf GTI Mk7 in either three or five door configuration, comfort, for those who seek it, will not be lost. The boot weighs in at 380 litres, it has an adjustable floor and it can be extended by folding the back seats to a further 1.270 litres. The VW Golf GTI doesn’t lose any interior space either, as its dimensions are identical to those of the base car.

Want to know more about the VW Golf GTI? Then click here.