Unlike the rest of Volvo’s line-up, the compact Volvo C30 sheds the traditional formal looks formula that still remains the backbone of the company and comes in a more youth-friendly package. Labelled as a sports coupe – although it sports a hatchback profile – the C30 falls in the same territory occupied by the more aggressively styled VW Scirocco. And, in a similar manner to its competitor, it appeals to drivers who wouldn’t mind the odd jaw drop or finger pointing at them.

For starters, from a visual standpoint, the Volvo C30 is a mix of old and new, but the latter predominates. Tracing its roots to the Volvo SSC concept, the C30 has largely retained the majority of the lines that characterized the show car, which is quite a rare thing, as production cars tend to be watered down when put on the market.

The front is dominated by the long nose, which envelops Volvo’s grille, the pointy headlamps which extend slightly onto the front wings and a central air intake in the bumper. Two circular fog lights reside in special housing in the bumper, but they’re decorated with a rather cheap looking plastic mesh, which might put some of you off and even the better looking R-Design spec variant doesn’t circumvent that.

The hatchback profile of the vehicle underlines the long snout and extremely short rear overhang, as well as the sloping roofline and the sleek window line that gets narrower towards the rear. A trademark element of the company, the shoulder line has been accentuated heavily in C30’s case, making it seem much wider and squat than it really is.

Round the back, the car also benefits from a unique treatment, as the tailgate, which occupies almost half of the rear, is made from glass. Meanwhile, the distinctive rear lamps provide it with a distinctive personality and the effect is even more dramatic when they light up. 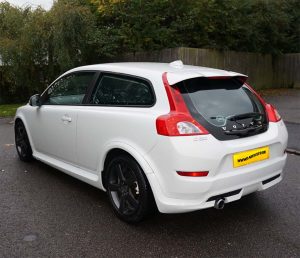 Volvo introduced the R-Design C30 as a more driver oriented machine, in an effort to please more demanding customers. Distinguished by a slightly different body kit that matched the car’s colour, a handful of R-Design badges splattered around the body, chrome covered tail pipes, 17 inch five spoke alloy wheels with a special design and a host of modifications to the interior – including a blue rev counter and speedometer, the R version also was fitted with stiffer springs and a sharper, more responsive steering system.

However, production ceased and Volvo no longer offers the vehicle on sale on its official website, making the change of snagging a brand new model directly from the manufacturer non-existent. On the other hand, if you look hard, you might find one at a Volvo dealer or snag a used one from a private seller. 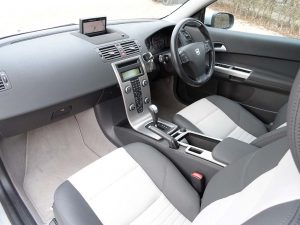 Despite being more progressive in exterior design than its relatives in Volvo’s back yard, the interior reflects the brand philosophy: minimalistic and functional. A visually pleasant element inside is the floating center console, which lends it a posh look. However, the gauges look a bit restrained in styling and if we’re to be honest, so does the rest of the cabin.

On the upside, the materials are pleasing to the touch and you won’t get any creaks and rattles even on the bumpiest of surfaces, because the quality is top notch. Full leather covered interior comes as an option, while the addition of dual tone upholstery reflects an attempt from the company to make their product stand out. 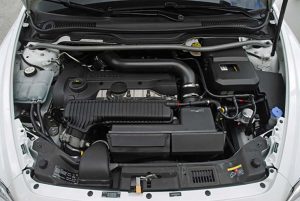 The compact Volvo C30 fairs rather well on the road, as it offers plenty of grip and there’s no body roll in sharp corners. However, the dampers tend to be a bit on the firm side, feature which you will not appreciate so much if you have to drive over a bumpy road. Also, despite that the steering is sharp, it doesn’t offer that much feel, making it a bit artificial and less engaging than the BMW 1 Series, which seems to reign supreme when it comes to handling and driving pleasure.

But don’t let yourself discouraged – as long as you won’t be racing with it or use it as a make-shift tractor in the fields, Volvo’s sport coupe will become one car that you will appreciate in your day to day life. 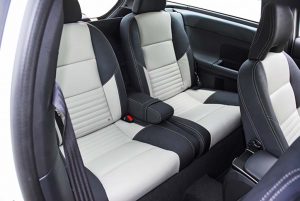 Generally, owners had few complaints about the car. Some odd issues involved occasional electrical faults, front tyres that wear a bit too fast, the inconsistency in reliability figures (claimed versus real life) and the less than expansive interior space. Parts and service were rated from “decent” to “expensive”, which means that you may have to pull a few extra quid from your pocket if something goes bad.

In terms of safety, it’s Volvo we’re talking about here, which means that you will be covered. The Volvo C30 also scored five stars at the Euro NCAP crash tests, thanks to its advanced safety features and the array of seven airbags included as standard on all models. 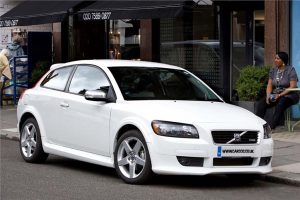 Following the 2010 facelift, only two engines and trim levels were left available for buyers: a 1.6 litre, 113 horsepower D2 diesel and a 2.0 litre, 143 horsepower petrol. As expected, the first engine provides the best fuel economy figures, as the diesel has a claimed 65.7 mpg. The latter power plant boasts better performance, but you’ll sacrifice a lot, as it will return around 37.2 mpg. As a reminder, please note that some users have reported that the factory provided figure were a bit too optimistic.

While you may not be able to buy a completely new car, you have a wide range of choices, as used Volvo C30’s sell for prices starting from £5,000 up to £12,000. We wouldn’t advise you to invest more in one, as it tends to depreciate faster than some of its German rivals. 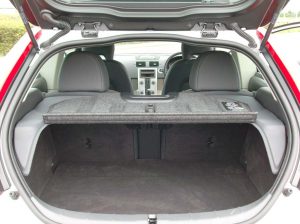 The Volvo C30 comes in only one body configuration – a two door “coupe”, with only four seats. The driver and front passenger will be the most fortunate, as space is plentiful in the front and are helped by the various adjustments done to the seats and, in case of the driver, to the steering column. However, in the back, the two seats offer limited space for adults, as your knees will touch the seat in front of you. Moreover, the sloping roofline means that tall persons will hate you for cramming them there, as chances are their head will touch the headlining; children, on the other hand, should be fine.

Another issue is the lack of adequate storage spaces, as the small car is not that generous in providing ample room to store your belongings. Speaking of space, the boot opening is rather small and it may hinder you when you’re trying to fit large items, but if in need, you’re welcome to fold the rear seats and gain additional space.