Generally, in the realm of performance automobiles, raw muscle comes at a cost; a considerable one, we might add. Not so with the Nissan GT-R, which offers blistering figures at a reasonable price tag – for a supercar, that is. 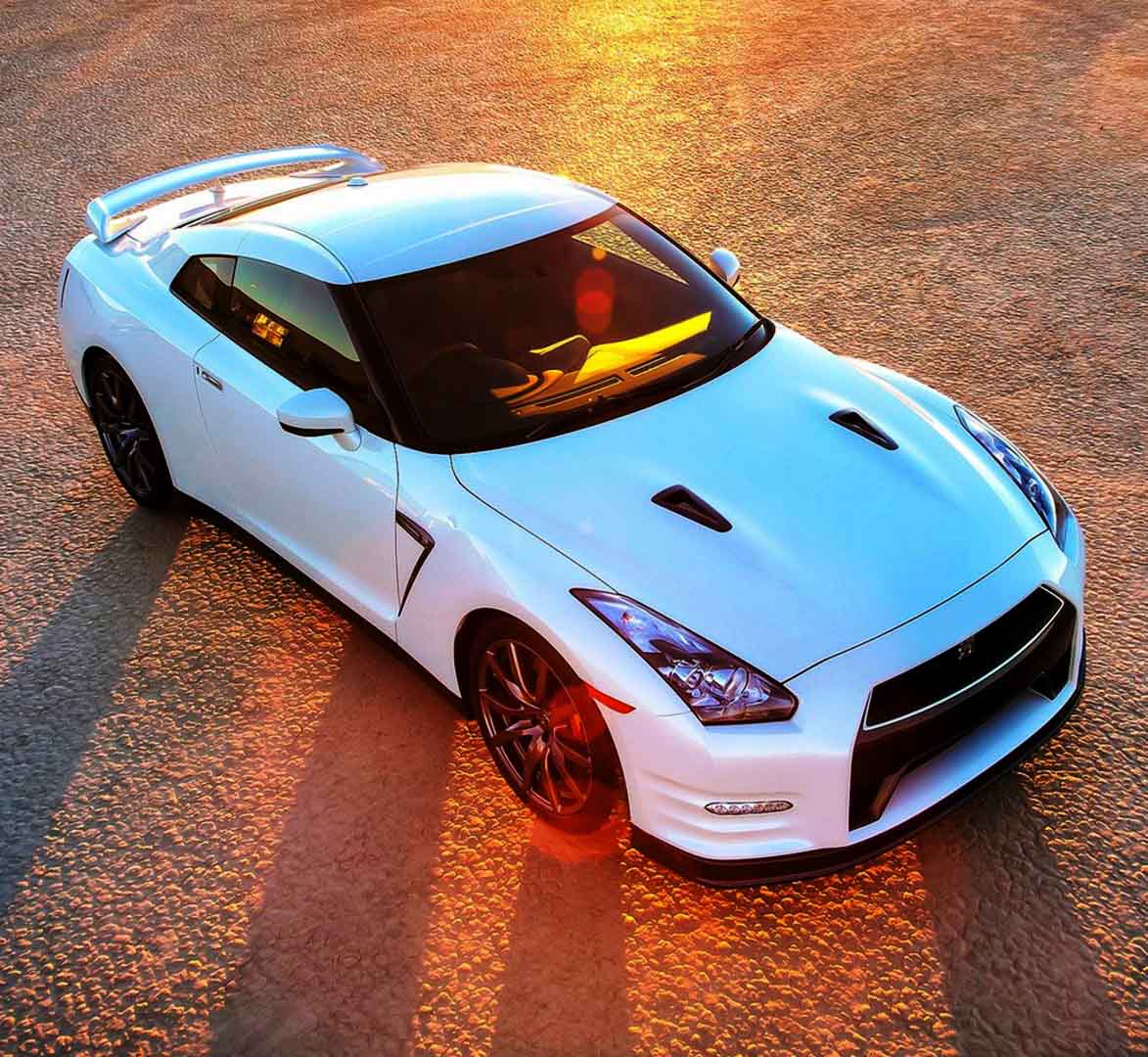 Nissan’s foray into the turf generally owned by Corvette, Ferrari, Porsche, Lamborghini, Noble and the likes has been a very successful one, as the original 2008 Nissan GT-R owed its existence to the legendary Skyline and was built upon that heritage. A new design, aimed – at the time – primarily at Porsche, has, throughout the years, evolved into a machine that is often times raced against the absolute monster of the roads, the Bugatti Veyron. No wonder its nickname is “Godzilla”. So what makes it so special? Let’s find out.

Although in existence for over 6 years, the overall design of the Nissan GT-R hasn’t changed much, apart from various facelifts and its shape is easily recognisable. The front is dominated by the large grille, whose lines extend into the air admission in the bumper, forming the signature GT-R fascia. Two subtle, horizontally placed daytime running LEDs sit on either side, while the elongated headlights extend into the front wings. The bonnet has two ridges which start from the windshield and continue until they meet the grille, forming a subdued nose – a note of sportiness, hinting at the large power plant humming underneath.

The large, muscular front panels are wide and incorporate a sculpted air extractor just before the door, as well as a turning light. The rear panels continue the same theme, the shoulders being very pronounced and heavily arched. At the rear, a pair of circular rear light pays homage to both the previous versions of the car, as well as to the Skyline R34 model, a true legend among car enthusiasts. A large spoiler sits atop of the boot, while the sculpted rear bumper houses a large air diffuser and four exhaust tips, two on either side, underlining its uncompromising appearance.

In terms of looks, compared to other vehicles, it is hardly a beauty. In fact, it resembles more a robot than anything else, its peculiar, muscular lines being the prevalent element in the design of the Nissan GT-R. It’s no Italian beauty, but rather, raw Japanese performance.

While in the not so distant past, the focus has been primarily on performance, the Nissan GT-R 2014 version seeks to offer a better build quality, smoother handling and an overall more usable car, not just a track vehicle. The suspension settings have been recalibrated, so regardless of the road conditions, all four wheels stay firmly planted into the tarmac. The LED headlights feature a thunderbolt design, while the tire with which the car is equipped – Dunlop SP Sport Maxx GT – have more rigid side walls in order to improve the cornering at high speeds.

Muscular, compact and instantly recognizable as a Nissan GT-R, the most performance oriented model from Nissan delivers an unadulterated racing experience for a decent price.

The racing DNA of the vehicle is visible in the cockpit. A rather bland interior will greet you once you step inside the cabin, as everything is designed to be functional, not good looking. It loses points with regards to the aspect, as well as materials (finding itself in a similar situation to earlier generation Corvettes), because plastics cannot emulate the same sensation of quality as some other competitors have. The front seats, however, offer excellent support, but may be tiring, after long drives, due to their stiff nature.

The Nissan GT-R is a four-wheel drive car, with two drive shafts powering the drivetrain, with a 98 to 2 ratio (rear and front), but when front grip is needed, the system transfers as much as it considers fit in order to maintain the perfect balance between the two axles. The acceleration feels brutal, as the twin-turbo system has a second or so of lag and the delay hits you in the back of the head like a sledgehammer. While “normal” V6 engines develop 2 to 300 horsepower, the GT-R’s power plant churns 542, so it’s one hell of a kick to drive! The suspension, even on its mildest setting, still feels stiff – probably the Japanese engineers tuned it on the track – so if you’re after a long drive in your personal Godzilla, you better have a strong back, as you’ll feel most of the protuberances on the road!

The Nissan GT-R is a proven piece of engineering, a true technological marvel. With electronically adjustable settings, high grade resistance parts and fine tuned components, the vehicle is one of the most reliable in the supercar class. Even its tires are filled with nitrogen so as to avoid having unequal air pressure in the wheels! Moreover, Nissan will offer a manufacturer warranty and, through its Nissan Care program, free roadside assistance 24/7, in case you find yourself in a less than pleasant circumstance.

The basic model comes bearing a price tag of £78,020, but for that you get a twin-turbo V6, with 542bhp, 466lb of torque and a 6 speed semi-automatic transmission. The 62mph threshold comes after a mere 2.8 seconds and the speedometer stops at the 196mph mark. Or so they say; the brave are welcome to test the claim. For the ones who seek more, a £10,000 extra will bring you the “Track Pack” option, which includes a new set of lightweight bucket seats, reinforced Bilsten shock absorbers, enhanced frontal aerodynamics and gets rid of the rear seats, in order to save weight. The mileage is rated at 16 mpg in the city and 23 mpg on the motorway, but if you want to get those figures in real life, you should have a feather light foot, as the engine eats a lot of petrol if pushed.

The top of the line Nissan GT-R Nismo version, the most hardcore machine in Nissan’s back yard has a price point of £125,000, but comes equipped with a more aggressive body kit, a 591bhp petrol engine and blast of 2.5 seconds from 0 to 62. Moreover, it boasts a record time for running on the Nurburgring circuit, the lap time being 07:08:67 seconds.

Although the standard version has four seats, they are more suitable for children rather than adults, as the leg space is very limited. Due to the slanting roofline, headroom is also restricted, which means that if you absolutely need to stay in the back, make sure it’s for a brief period of time. As for the boot space, 315 litres is all you got, but that should be enough to fit a few small bags.

Want to know more about the Nissan GT-R 2014? Click here.