If a single figure should stand up for this car, it would be 431. Kilometres per hour (267 mph), that is. Yes, you heard it right, and that makes the Bugatti Veyron Super Sport the fastest production car on the planet. Twice. 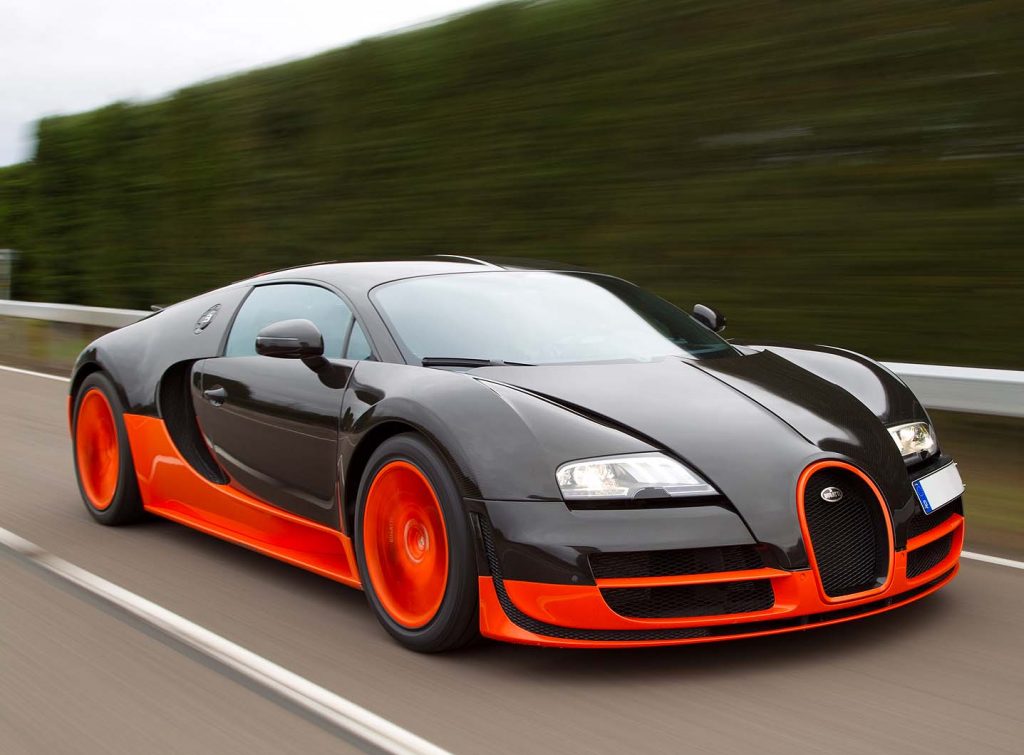 Let us explain. See, in 2005, the original Veyron claimed the record with 408.47km/h. After a lot of cheering and celebration – 2 years, to be exact, the mood got dark because someone had taken away their title. An upstart company from the US, namely SSC, hit 256mph in Nevada, with the Ultimate Aero model. Then, in 2010, Bugatti tried again – not because their test pilot was getting bored, but because their reputation was at stake. So, in German fashion, at VW’s Ehra-Lessien circuit, the Bugatti Veyron Super Sport hit 267.91mph, or 431.072km/h.

Not long after they were certified by Guinness World Records, the gentlemen there decided that they should withdraw the certification on grounds that the cars sold to customers has a speed limiter installed, which only allowed them to reach 258mph. After 5 examples of the car were built, Bugatti got mad and sought recertification – which it got – again – because the rest of the Bugatti Veyron Super Sport models, they say, are also able to reach the record speed even with the limiter in place. Which begs the question: why is there a speed limiter if it will not, ultimately, limit your speed? But that’s a question for Bugatti engineers, not us common mortals.

Passing on to the interesting bits, let’s check out the design of the car. Its outer shell is made entirely out of carbon fibre, and so is its monocoque. What is noticeable right away, similar to the original Veyron is that almost the entire car is made of curves – straight lines are nearly impossible to find – for aerodynamic reasons. The less drag it creates, the faster it goes. The fascia features larger air intakes and a lower lip under the front bumper, to create downforce at high speeds. The bonnet swoops towards the signature horseshoe grille and features a ridge just down the middle. The roof is clean, and just above the rear window, two NACA ducts suck air to the exposed, centrally mounted engine. The rear features enlarged air outlets, together with a brand new centrally mounted exhaust system, with flattened tips, encased in the rear diffuser.

The engine is the same 8 litre W16 shared by the normal Veyron, but heavily modified. 1,200bhp are produced at 6,400rpm and a staggering 1,106 pounds-feet of torque are generated by the massive power plant. Larger radiators were mounted in order to improve the cooling system, while the turbos benefited from the same treatment. At almost 50kg lighter than the original Veyron, the Bugatti Veyron Super Sport still tips the scale at close to 2 tons, so it’s not the slimmest figure in the automotive realm; however, it’s the fastest, and that will be on the headlines. Only 30 examples of the vehicle will be produced, each having a price tag between £1.45 million to £1.62 million, with no optional. A bargain!

Much more aggressive than the original iteration, the Bugatti Veyron Super Sport features an enhanced body kit, which hides many modifications in order to increase performance as much as possible. Its wide, low stance is unmatched by any car in production today and the paint scheme on the limited series model is designed to stand out in any situation.

In the cockpit, the interior got an overhaul, as fade resistant leather has been installed, which imitates alcantara, but is much finer to the touch. There is Super sport stitching on the headrests, and a huge carbon fibre strip extends, from the dashboard, all the way onto the door panels.

Once you hop in behind the steering wheel and start off, it behaves like a family car in the low to normal speeds; quite surprising, considering the monster in the back, but Bugatti’s engineers don’t play around. However, if you are brave enough to firmly plant your foot on the pedal, the driving experience is face-melting. With an acceleration of 2.5 seconds to 62 and 0 to 186 in 14.6seconds, there is nothing on the planet that can come close. The soft compound Michelin tires have only 5mm of thread, so a full 15 minute run at maximum speed will wear them out completely and, considering the Bugatti Veyron Super Sport is four wheel drive, you’ll have a pretty price tag waiting for you when you get a new set.

Well, we haven’t heard of anyone either asking on how reliable the car is or if one ever broke down, but rest assured, for if that happens, Bugatti will take care of your needs. Considering that the VW Groups is behind everything, the fastest car on the planet must be not reliable, but perfect, from a mechanical standpoint, because a 267mph run requires every component to work in harmony and withstand extreme strain, repeatedly.

With the Bugatti Veyron Super Sport coming in at the starting price of £1.45 million, expect the running costs to be as high as your wallet is thick. Officially, Bugatti rates the Veyron Super Sport combined cycle to around 7 gallons per mile. A set of new tires revolves around the figure of £26,143, a set of wheels is £42,949, and the option to have an exposed carbon fibre body costs £266,414. However, considering that Bugatti’s CEO, Wolfgang Durheimer, stated that “the average Bugatti customer has about 84 cars, 3 jets and one yacht”, the costs shouldn’t come as a surprise.

If you’re looking to buy this car to do the groceries, you’ll find you’re slightly off target. With a measly boot that will hold, in the most fortunate case, a briefcase, the Super Sport is not the most usable car in the world to do this task. But at least you’ll have an excuse when your spouse sends you off to do the shopping!