The Lexus CT200h represents’ first foray into the compact car class, being, as the manufacturer calls it, “the world’s first hybrid luxury compact”. Moreover, it’s also the first small dimension automobile to come from Lexus, as the car makes is mostly known for saloons, coupes and SUVs. So how does it fare? 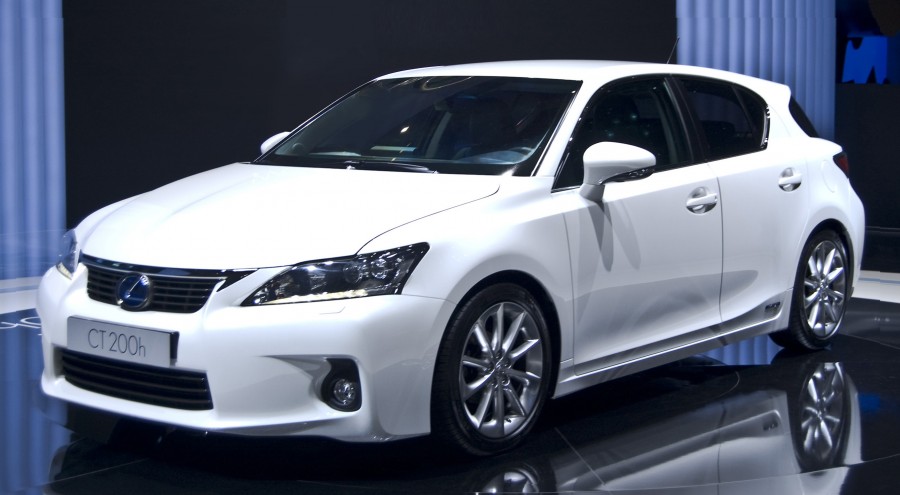 First of all, visually, it doesn’t disappoint. The large spindle grille, now a universal Lexus symbol, stands out first, due to its peculiar design. Quite controversial when it was introduced, now it has become a common reality and from our point of view, it’s a successful implementation of a design meant to be different from the herd. So Lexus nailed it here. Just look at the gorgeous LFA!

Passing on, the large chrome logo has a blue contour – a sign that the Lexus CT200h is a hybrid. The headlamps are sharp and aggressively styled, being reminiscent of the rest of the Lexus range. The sculpted front bumper incorporates a pair of fog lights, on the left and the right side of the vehicle. The side profile has the typical hatchback styling, but with enough details to let us know whose brand it belongs to. The shoulder line starts subtly, from just behind the front panel and continues until it reaches the rear of the vehicle, in a clear, strong stroke. The wrap-around rear window and the tail lights incorporated into the shoulder line have a visually pleasing aspect, remaining faithful to the current design language that characterises the car maker and unifies the whole range of vehicles. Perhaps the back lacks elements of interest, as only the lower portion of the bumper features what appears to be an air diffuser, but it’s more of a cosmetic detail than a purely functional constituent. Also, the exhaust is hidden, which goes against the trend of showing it off, even in the hatchback class.

In an effort to consolidate the vehicle’s premium quality, Lexus has decided to isolate the car as much as possible from both road and wind noise. Quite remarkably, it feels much more refined than any of its rivals at low and medium speeds; however, if you push it, wind noise becomes a bit disturbing at times.

Being a petrol-electric hybrid, the engine is barely audible. The Lexus CT200h can run up to 25 miles per hours on full electric mode, but when the energy is low the petrol engine starts – subtle and refined, it makes very little noise, reinforcing the car’s hybrid status. The electric motor is useful on low speeds, as it helps fill the torque gap – the petrol engine needs revs – but sadly, as a vehicle, the Lexus CT200h does not excel in the driving at high speeds, which is quite a shame and raises a question mark – how did Lexus, a brand with known performance models, disappoint at this aspect?

The Lexus CT200h exterior design fits with the Lexus philosophy of L-finesse, with the large spindle grille, the headlamps with arrowhead LEDs and the broad, muscular shoulders.

The cabin looks very premium, as the large instrument cluster, with the massive speedometer behind the steering wheels is noticed immediately. The expansive central console includes a large, 4.2 inch display, which can show, according to the trim, either basic information about the vehicle or house the satellite navigation. The seats are large and comfortable, the leather quality is impressive, while the plastic elements, although present, don’t feel cheap and are soft to the touch.

As much praise as it might get for it frugal fuel consumption and its exemption from road tax, the Lexus CT200h doesn’t feel as quick or as exciting as some of its rivals, the closest being the BMW 1 Series. The steering is precise, but the connection between driver and vehicle feels disengaged, especially at high speeds, where its generally “numb” character prevents it from being a fun car to drive. At low to medium speeds, however, it’s one of the best cars in the compact class which seems quite out of the ordinary – why would Lexus make it behave well only under certain conditions?

The hybrid drive train comes from the much revered Toyota Prius, which has proven to be one of the most environmental friendly and reliable vehicles in the world. Benefitting from the extensive experience of the Toyota group, the Lexus brand is synonymous with ride quality and relatively little mechanical flaws. All models come with 8 airbags and a full 5 star rating at the Euro NCAP tests, as safety is one of the main concerns at Lexus. A standard, 3 year warranty covers the car itself, while the hybrid system has a separate, 5 year warranty.

The basic model, the Lexus CT200h S starts from £20,995 and boasts a 78.5 mpg, best in class carbon dioxide emissions at 82g/km and a zero road tax, while the top of the line CT200h Premier has a price tag of £29,495, but comes equipped with a 13 speaker Mark Levinson media system, a reversing camera and Lexus Premium Navigation.

The Lexus CT200h comes in a 5 door configuration, so the rear passengers will have easy access to their seats. Legroom is sufficient, but it could have been better, as some rivals offer more space. Moreover, the boot is rated at 375 litre – not impressive, but enough to fit your necessities. The rear seats fold down, if need be, and offer even more room – 965 litres but keeping in mind that the batteries reside in the back, it seems acceptable.

If you want to know more about the Lexus CT200h, click here.