Quite possibly the most popular hybrid car in the world, the Toyota Prius has reached its third generation. Having a slightly redesigned exterior, a more powerful propulsion unit and an even smaller carbon footprint than before, it’s still the car to go for if you fancy having an eco-friendly image. 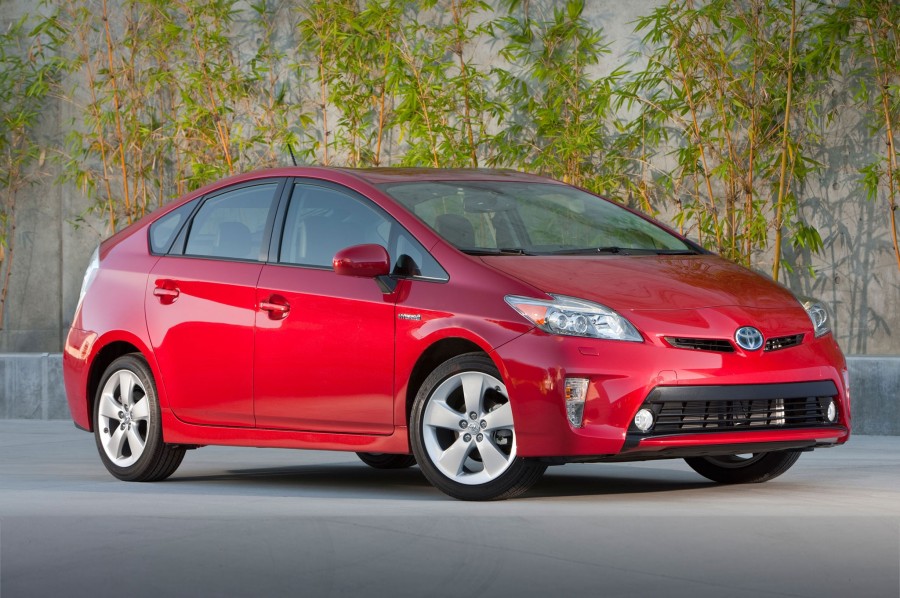 While being a hybrid automobile is no longer a novelty nowadays, it’s mostly remembered as the car that started the hybrid trend and it still holds the title of having the lowest amount of emissions for a vehicle of its size. Speaking of emissions, the basic model, the T3, can brag with a total amount of carbon dioxide of only 89g/km, which means it’s both exempted from road tax and from London’s infamous congestion charge.

Visually, the Toyota Prius has kept the same wedge-shaped, iconic profile, which others have tried to imitate – such as the Honda Insight, which shares more than a few styling cues with the hybrid veteran.

The fascia is dominated by the sharp headlights, which extend a bit onto the sides of the front wings, the blue highlighted Toyota logo on the nose and the large horizontal slot in the front bumper. On either side, mounted vertically, are a set of fog lights. Curiously enough, the headlamps also feature a subtle blue hue, which surrounds them and serves as very nice detailing. The Toyota Prius hatchback profile must be one of the most recognizable in the world, with the arched back and distinctive window line. Round the back, boomerang-like lamps are made out of a myriad of LEDs and include chrome details, giving it not only a touch of personality, but also scoring in the looks department. The rear window is a bit small, but the addition of another one, situated on the roof, preceding the spoiler, lets more light enter the vehicle; this small bit of stylistic artifice allows for a more individualistic look and for a more airy interior atmosphere.

There are 3 versions of the Toyota Prius in terms of trim – the basic T3 model, the T4 – which serves as middle ground and the T Spirit, the top dog. Two new versions of the cars have been introduced recently, namely the Prius Plug-In Hybrid, which promises only 49g/km of CO2 (but comes at a cost) and the 7 seat Prius +, which includes an extra row of seats and acts as an MPV.

All cars come with the same CVT automatic transmission and a 1.8 litre VVT-i petrol engine. The total power output is 136 bhp and it represents the combined value of the petrol engine and the electric motor. However, regardless of trim level or options, you won’t be able to select another power plant so it’s either this or another model.

The cabin still keeps its futuristic layout, with all models receiving the Head-Up-Display as standard. The Synergy Drive system uses a digital screen to indicate fuel economy figures, electric range and other bits of information the driver might need, but it gets distracting while on the move. The interior provides a disappointment concerning the quality of the materials employed, as hard plastic is ever-present, taking away some of its charm and making one ponder if it is still worth the price.

The acceleration time from 0 to 62 is rated at 10.4 seconds; not the most impressive figure we’ve seen, but considering it’s a hybrid car and not a sport saloon, this should be sufficient for most people. The ride, although comfortable enough, still seems too stiff; the reason many lie in the fact that the springs had to be stiffened in order to support the load of the electric motor so do mind the bumps and potholes, as they’ll be felt in the cabin. The steering is precise and the tires offer plenty of grip, but agility is not one of the strong points of the Toyota Prius, as the CVT transmission doesn’t allow for overly sporty driving.

Toyota, as a manufacturer, has long forged an identity of being one of the best in terms of engine reliability. Not shy at all when it came to introducing new technologies to the masses, the Japanese giant also handles any complaints with care, as it has an excellent customer service. All cars come with a 3 year manufacturer warranty, as well as a 5 year one for the hybrid system. One of the most common complaints that plagued earlier versions of the Toyota Prius was the battery, which depleted rather fast, leaving drivers frustrated, but the present generation has received a new upgrade, which should put those worries to a rest.

The Toyota Prius comes as a five-door hatchback, which should guarantee its practical nature. Please bear in mind that due to the arched design of the roof, tall people may have a hard time on the back seat, as they might hit their head against it. The interior includes a host of cup holders, small storage partitions and a large glove box compartment, and the doors are also able to hold a bottle of water. The boot measures 446 litres, which should be reasonable for everyday use, but the good news is that it can be extended to 1.120 litres by folding the back seats, which lie completely flat. Underneath the regular boot, there’s also another storage compartment, which can be put to use in case you have anything to keep from prying eyes.

Want to know more about the Toyota Prius 2014? is so click here.