Although the BMW Series 4 Coupe is labelled a ‘brand new model’, it is loosely based on the old 3 series. The decision was made in order to separate the Saloon from the Coupe and Cabriolet versions, allowing for a more aggressive styling, while adding a bit more intrigue and exclusivity to the car. A similar decision was taken a few years back by Nissan, who created the GTR nameplate in order to replace the Skyline, which had 2 and 4 door configurations. 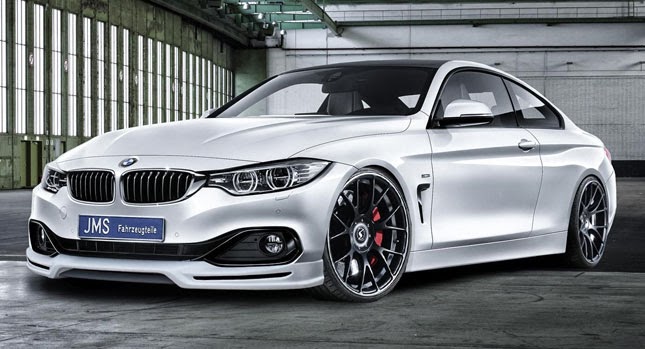 Boasting an illustrious, sporting heritage, the German company BMW doesn’t need an introduction. Making full use of its extensive know-how and experience, it has again been able to produce a roadworthy car in the form of the 4 Series newborn. Featuring a more dynamic roofline than the 3 Series that we know and love, the new Coupe does not fall short of impressing at first sight. A long, swooping bonnet, wide wheel arches and strongly profiled side lines simply scream raw power. Numerous manufacturers take pride in stating that their latest model seems to appear in motion while standing still and there is no better case in point than the new BMW series 4 coupe.

Marketed as having “Space for four” but being “Built for one”, it is clear that the emphasis of this car is on the driver. With an interior layout reminiscent of the 3 Series, it features a driver oriented centre console built out of premium materials, an expansive Sat Nav screen and a large instrument cluster with the tachometer and speedometer simply begging to be set in motion.

When it comes to power, the smallest BMW series 4 coupe petrol engine, the 420i model boasts a 2.0 litre petrol engine that yields 184bhp. The 428i model has a 2.0 litre engine, providing 245bhp and finally the 435i model has a six-cylinder engine that yields 306bhp. On the diesel front, there are three options, at 184, 218 and 258bhp, while an 8-speed automatic gearbox is standard on all models. The entry-level SE variant is the cheapest, at around £29.425, while the top-of-the-line M Sport costs in the vicinity of £41.665, excluding any extras you might want. The most powerful version offers a 0-62 time of 4.1 seconds, which is faster than the Ferrari 360 Modena!

As usual, BMW put a substantial investment into the development of their new car, the BMW series 4 coupe. Thus, there is an “Eco-Mode” for fuel saving (lowering the consumption by up to 20%), an Auto Start-Stop system, which stops the engine when idle, and then re-engages it when you lift your foot off the brake (with an automatic transmission) or shift into gear (for manual transmission) and a brake energy regeneration mechanism, which charges the car’s battery by making use of kinetic energy when braking.

The BMW Series 4 is a new model meant to represent a category all on its own and differs from the base 3 Series model, by introducing a new, revitalised design. Coming in its coupe configuration, the car manages to create a bold visual impression with its athletic lines, the well proportioned dimensions and its imposing stance. The low centre of gravity not only helps it to perform better on the road, but offers an important contribution to the overall look of the car. The swooping bonnet contrasts with its shorter rear end, and the muscular wheel arches, together with the profiled side lines give the look of a stylish, all-round sports car.

Practically built around the driver, the interior looks and feels premium quality, while leather and aluminium strips insure an exclusive sensation. For improved ergonomics, the console is oriented towards the driver, while the instrument cluster is a display of power, as strong lines contour the dials, while the red illumination of the controls gives a dynamic effect.

Whether you would like to take it for a gentle drive or simply plant your foot on the gas and keep accelerating, the new BMW series 4 Coupe delivers. Offering a smooth ride, the car shows its sporting character even when driven to the local supermarket. The entire drivetrain has been created with the purpose of delivering excellent response and feed-back to the driver, proof being the adaptive dampers, the selectable driving modes and the immediate response of the eight-speed gearbox. The engine of the car, besides its high power output, is said to have been created with the help of sound engineers in order to provide a special “soundtrack” for the driver.

Sharing a host of components with the 3 series, which is perceived as being a reliable car, there will not be any issues with the BMW series 4 coupe. A new model also means new technology, numerous tests and heavy research behind the product. As this is a recently introduced model to the market, it means that there aren’t too many testimonials warning about potential issues, but then again, the German manufacturer has a more than solid reputation when it comes to making automobiles.

BMW offers a warranty for each new model, so in the first years of your ownership you can rest assured that your car will be taken care of if it should encounter any difficulties in running. The solid engine line-up gives you the possibility of choosing a model with a smaller displacement – which should reduce fuel consumption and costs. Start-stop technology and other enhancements made by the car maker should also restrict costs, as long as you don’t push it too far – but that’s a matter of personal choice.

Although a coupe, the BMW Series 4 has four seats and can comfortably fit the same number of occupants inside. The carefully designed interior means that every bit of space has been thoroughly thought out and utilised accordingly. The boot capacity, of 445 litres, is large enough to accommodate the needs of pretty much anyone and is easily accessible.

For more information on the Bmw series 4 coupe click here.