More than 13 years ago, Volkswagen unveiled a concept car that bore the “Microbus” moniker, a modern reinterpretation of the original vehicle – the VW Type 2 – that gained a cult following, all across the globe. 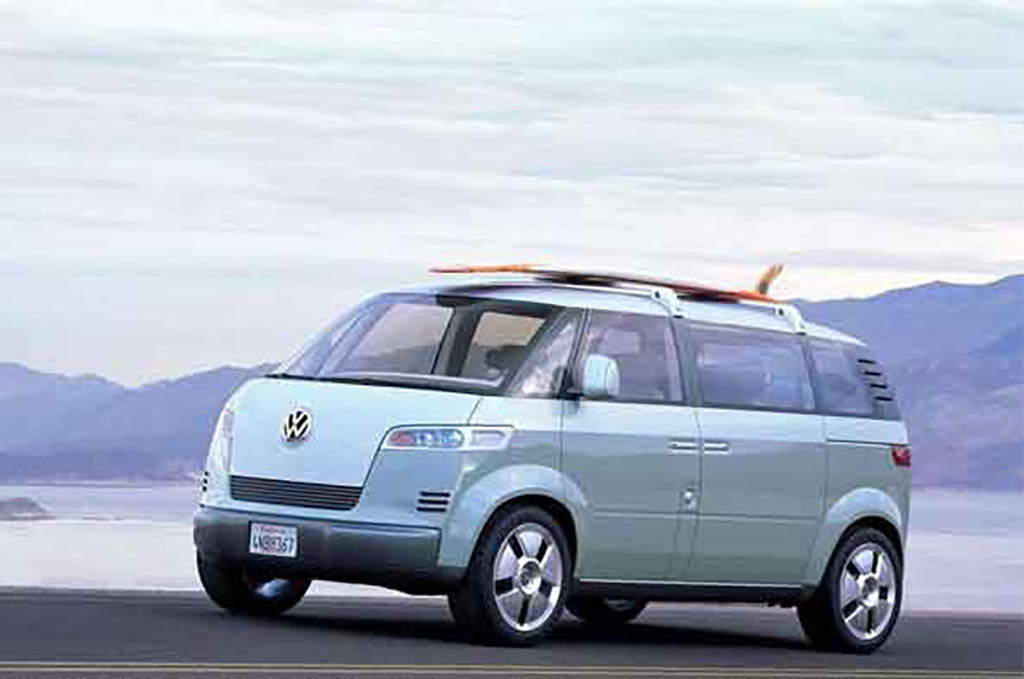 First produced in 1950, the Type 2 was designed as a do-anything automobile, being capable of carrying form pendulum clocks to an average barn door; production ceased in 1979, by the marque’s decree, but a licensing deal in Brazil ensured that the production of the vehicle carried on (under the name of the Kombi) until the latter half of December 2013.

Coming back from the history lesson and returning to our discussion, the Volkswagen Microbus concept was unveiled at the 2001 NAIAS Auto Show. Keeping many of the traits of the original, the concept respected the overall proportions and styling, adding, however, a dash of modernity in the mix, as the overall aspect is much cleaner and sleek. The dimensions have increased, both in length and in width, while the engine has shifted position, from the rear to the front of the vehicle.

It seems that Volkswagen’s intention was to create a modern original, instead of a copy, as more elements present on the version that gave birth to the immense following were omitted and replaced. One of the most visible modifications were the new thin LED technology, horizontally placed lamps that replaced the original circular ones, as well as the swapping of the engine position.

A new interior, that included three rows of seats, no centre console and a versatile multimedia control centre placed on the dashboard relied on a minimalistic design, with no other amenities being present, as the focus was on keeping the car as pure as possible.

Riding on the same wave, VW unveiled in 2011 a slightly modified version of the Minibus, dubbed the Bulli, at the Geneva Motor Show. Visibly smaller, it had the same overall length as a Polo, whilst being slightly wider than a Golf hatchback. The wheels were pushed more towards the extremities, so as to provide the occupants with more interior space. The interior design was vastly reminiscent of the Minibus, but it sported two rows of seats, a more flattened nose, different headlamps, a huge VW logo in the front, as well as circular fog lamps as opposed to the thin LED strips of the former.

A trio of propulsion units was offered: two petrol engine, the first with the displacement of 1.0 litre and the second with 1.4 litres, while the third option included a purely electrical motor, with an output of 85 kW (approx. 113bhp) and 199 lb ft of torque. The performance figures of the electric motor included a top speed of 87 miles per hour (electronically limited) and a 0 to 62 sprint of 11.5 seconds. 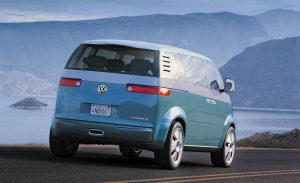 However, none of the concepts have materialized into a production version. In early 2014, numerous rumours circulated in the online media about a resurgence of the Minibus and a potential production version that would see the light of day, but nothing concrete has appeared to confirm the stories. Thus, we are left with two pretty concepts and a lot of shattered dreams. 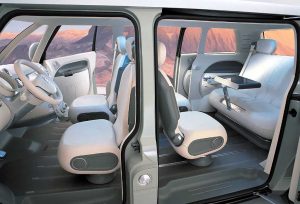 As the Minibus is a concept, we will take its closest counterpart in the VW realm, the Caravelle, as reference when talking about more practical issues further in the review.

The interior houses individual seats that are able to rotate independently, facing either the direction of driving or the doors, as opposed to the smaller Bulli, which has both the front and rear seats configured as benches. A minimalistic direction of design has been employed, as the dashboard is bare, displaying only the instrument cluster, the climate controls and a multimedia centre.

As the aerodynamic profile seems to provide it with less wind resistance than the Caravelle, we would imagine that the top speed might have been slightly higher than the aforementioned model (119mph). The suspension should be more towards the soft side, as this would not be a vehicle marketed for its hauling capabilities. 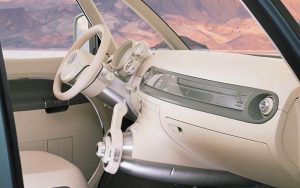 As this is a VW, expect a decent behaving van. The engine will most likely be sourced from one of their existing vehicles, Golf included, so decent performance (at least in MPV terms) should be provided, along with a stable and pleasant ride experience. Add to that the 60,000 miles warranty and you should have a trouble free experience.

The expected price range for a production based Minibus would oscillate between £20,000 and £35,000, depending on the engine choice and any options selected. Parts shouldn’t be hard to find, since it will most likely be built on a common platform, with numerous components shared between the various models of the manufacturer. Mileage figures for a 2.0 TDI Blue Motion Caravelle with 140bhp were reported as 39 mpg mixed cycle, a good starting point for our analysis. The Minibus, with its more aerodynamic and compact shape should yield better performance and less drag, which would result in a better fuel economy. Couple that with a start/stop system and a potential hybrid system (or a fully electrical one) and it will prove to be a great alternative to all those bland minivans in production today.

A seven seat configuration should prove more than appropriate for an average family. The individually rotating seats would most likely be scrapped, a fixed configuration being the safest bet for a production vehicle, as the production costs decrease. The storage spaces should be plenty, with easy access inside, courtesy of a sliding door on one side of the vehicle. Boot space should be in the vicinity of 3,500 litres with the second and third row folded down; lift all seats back in place and you should be left with 2 to 300 of litres. Remember, these are estimate figures, as the Minibus is merely a concept and not a production vehicle.