Toyota is a car manufacturer that doesn’t need any presentation – it’s so big, that it took over General Motors as the largest vehicle producer on the globe and it had better sales, despite the fact that the American conglomerate owned more brands than its Japanese counterpart. Also, Toyota has been at the forefront of research and experimentation with alternative fuel for motor cars, starting with the immensely popular Prius to the newly unveiled FCV. 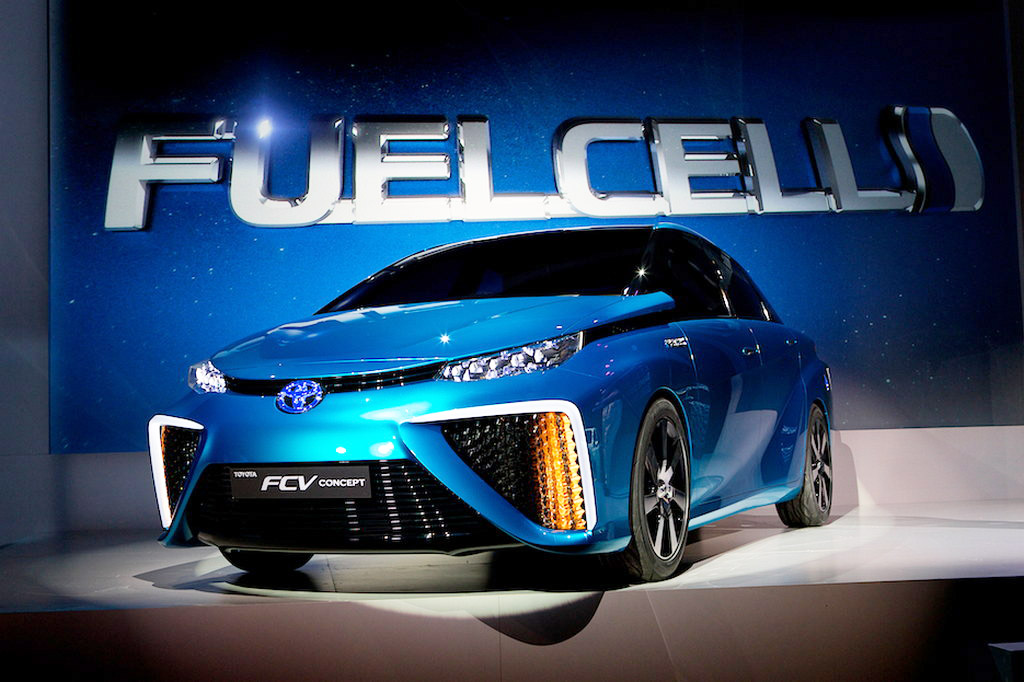 The Toyota FCV is shaped like a saloon, with four doors and four seats. The roofline is relatively low, as the lines of the car extend far back, giving the impression of dynamism.

The front is dominated by the front bumper, which incorporates three air intakes – a central one, with a protruding lower lip and two triangular ones of respectable dimensions which incorporate an array of LEDs. The grille is more subtle, hiding underneath the swooping, lengthened hood, and frames the headlamps; a line of equal size to the grille continues onward until it meets the A-Pillar. The sides appear to be sculpted, as a seemingly half broken wave forms the rear shoulders, rising above the wheel arches and incorporating the air ducts and part of the rear lights.

The seven spoke wheels aim to give it a more sporty nature, but their size seems too small in comparison to the body size – perhaps a gain of two inches in diameter wouldn’t have hurt. The back is very peculiar, as it continues the same theme established by the front end – two triangular air ducts, covered in mesh incorporate part of the rear light setup, while the other part sits just above them, close to the boot; the rear bumper has a very clean design, as only a small inverted triangle – the stop or reverse light – breaks the continuity of the lines.

What is special about the Toyota FCV, apart from its uniquely styled exterior, is the fuel that powers it: hydrogen. Far more environmentally friendly than the much hailed Prius hybrid, this vehicle promises zero emissions, as the only by-product it will release is water. The car functions on the basis of a technology called fuel cell. What that means is that it produces electricity from the chemical reaction between hydrogen (fed by its tank) and oxygen (extracted from the air); that reaction is then used to power the car’s engine. Thus, hydrogen is able to replace the need for fossil fuels, being even cleaner than today’s electric vehicles, which charge on stations often powered by the same fossil fuels.

The initiative of producing eco-friendly vehicles belongs to Toyota Group and it’s not limited to small vehicles – fleets of hydrogen powered busses and forklifts are planned – and some cities even make use of the busses. The Toyota FCV will be available as soon as the infrastructure needed for powering them will be set up in various locations on the globe.

The design of Toyota’s latest vehicle could be hardly called contemporary; on the contrary, it’s a statement of things to come. Although it still features the occasional straight corners, organic lines characterize its silhouette and give it a one of a kind appearance. The front end is characterized by large air intakes, while the sides feature flowing lines and balanced proportions. The rear of the car, although it features characteristics that continue the lines of the front end, is perhaps too clean – nothing tends to stand out.

The electric motor means that you get plenty of torque. Although it might seem a bit flat, as there are no sudden jerks or power surges when you throttle it, the power delivery is continuous and makes it predictable. An estimated 130bhp will make it tick and that’s quite enough to rival many conventional automobiles in terms of power output. What’s most unusual is that the Toyota FCV is silent and the only noise it makes comes from the air compressor and the tires. For mass production, Toyota states that it will offer the car with a noise-generating device to warn cyclists and pedestrians of the presence of the vehicle on the road, as it is too silent to be properly observed, as opposed to the classic cars powered by internal combustion engines.

Well, considering it’s Toyota, there would be no complaints in that category. However, the car has not been released to market yet, as only prototypes have been tested, so it’s extremely difficult to give a definitive answer. The Toyota FCV motor will have fewer moving parts than it’s classical counterparts, which means less wear over time and the only thing it will need is hydrogen – and even that, occasionally, as its range is extremely good.

The Toyota FCV is scheduled to go into mass production in 2015, but don’t get too excited, as the date is reserved only for Japan, the home turf of Toyota. U.S. and Europe dates were not released, although it won’t be long until the company decides that it’s economically viable to open orders for these regions also. After all, there are many producers to rival, right? The price for Japan revolves around the figure of 7 million ¥, while an estimate for Europe would be in the £30.000 to £60.000 region, depending on the Toyota Group plans. What’s great about the Toyota FCV is that on one fill, it will run between 434 and 515 miles and it will produce zero emissions – the only thing it will put out are water vapours.

Two high pressure hydrogen tanks replace the traditional fuel tank and are hidden inside the car’s body work and that reduces somewhat the interior space. However, the car is marketed as being only for four so considering the generous dimensions of the Toyota FCV – the wheelbase is 2,780mm – both the driver and passengers will be able to sit comfortably.

Want to learn more about the Toyota FCV, then click here.