First showcased in 2012 as a concept, the Tesla Model X is rapidly approaching production. According to the latest information, the production of the series model should commence “early 2015”, while the first delivered product should see the light of day approximately a year after.

The silhouette of the Tesla Model X resembles, to a great extent, that of the Model S, as the swooping window line, the headlamps and the rear lights look remarkably similar.

The front of the vehicle houses the large, signature Tesla grille, with a thin chrome outline and a satin black finish on the inside. The stylized “T” sits atop of it. The headlamps sport an extended teardrop design and are supposed to be powered by xenon lights. Two slim LED day time running lights sit just below the lamps, while a subtle front bumper lip and two small air intakes complete the picture.

Following a similar line of design with that of the Model S, the front wings and shoulder share the muscular, flowing lines. Although advertised as an SUV, it’s allure is more of a coupe sitting on high risers, being much sleeker than a BMW X6, for example, which by comparison, looks clunky and unattractive.

The rear is characterized by a sloping rear window, a short overhang and the distinctive pair of rear lights connected by a thin chrome strip. The only other element to “break” the cleanliness of the lines is a small air diffuser. 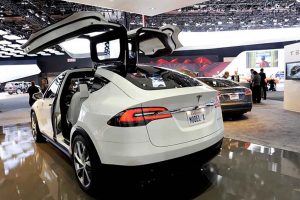 However, the main element which will drive the sales of the vehicle – apart from its all-electric propulsion system – is the peculiar design of the rear doors, which are hinged from the roof, instead of having a conventional design. Dubbed “Falcon doors”, they open upwards, in a manner similar to that of the gull wing doors. Elon Musk himself explained that they open “more up than out” and resemble a falcon in flight. Ok. Leaving aside the “wow” factor, there have been some serious debates about the practicality of the doors. You see, the front doors have a conventional front hinged system, while the rear ones open upwards – quite a lot! So, naturally questions ensued, such as “will it fit in my garage or will I have to demolish my old one so that I can buy this fancy piece of kit?” The official response is that the doors only open as high as the boot door will open, so in theory, it should fit any existing garage.

Other notable features include an extended glass roof, which will reportedly run the full length of the car (falcon doors included), dual trunks (both in front and in the rear, as the battery pack is integrated in the floor and an acceleration time of 4.4 seconds. 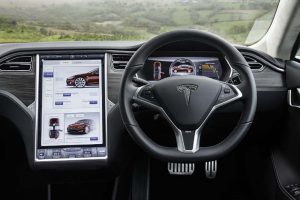 The interior of the Tesla Model X includes seven seats, the first two being pilot seats, reserved for the driver and the front passenger. The second row should have individual seats mimicking the layout of a bench, but which could be individually adjusted, as they sit on a rail. The third row should be – according to Tesla – able to accommodate two adults.

An innovative feature with which the manufacturer has come is the expansive touch screen display adorning the dashboard, taking the place of a conventional centre console. Now, all the vehicle’s functions can be controlled via a tactile interface, instead of being operated conventionally. Premium leather, as well as wood and aluminium should decorate the cabin. 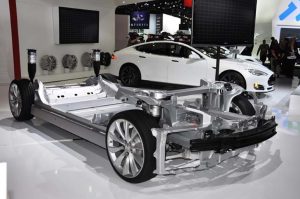 The Tesla Model X is said to feature a similar drivetrain architecture to the one found on the S. That means that two electric motors, one in the rear and one in the front will power the vehicle. The power output should be in the region of 60 kWh for the entry-level version and 85 kWh for the more potent one. All wheel drive will be a standard feature on all the variants. Moreover, the journalists which were able to briefly test drive the production run (or thereabouts) model have reported that the ride is extremely smooth and quiet, whilst headroom abounds, despite the sloping roofline. The expected driving range should be 300 miles, slightly more than the S, but then again, that is an impressive feat, considering the fact that the X will weigh significantly more. One last mention is reserved to the impressive 0-62 time, which takes just 4.4 seconds. For an SUV, that is remarkable.

Although a clear pronouncement cannot be readily given based on a pre-production model and a concept car, the Model S should give us a few clues what to expect. The main problems were relating to its touch screen interface, which proved to be non-responsive at times, the low quality EV charger and the automatically retracting door handles, which refused to deploy. However, the Tesla Model X has not yet gone into production and for a company with a lot of media attention, Tesla will most definitely make sure to avoid the reappearance of these things and deliver a spot on product.

Although no pricing has been announced, the speculated retail amount should revolve around £51,000 for the basic model, while the more powerful version should see a larger price tag. Add to that any optional and you’ll end up with a pretty hole in your account. But you’ll be running on electricity, which is nice. 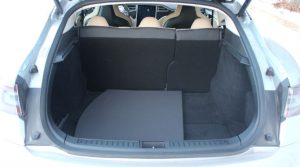 The Tesla Model X has been confirmed as having two rows of seats, with the option of adding a third one. In addition, both the second and third row will be foldable, allowing for a flat storage surface. The front and rear boots have a non-disclosed capacity, but the storage space should amount to more than what the Model S is offering (894 litres).

Want to know more about the Tesla Model X? If so, click here.