One of the most noteworthy presences of the 2015 Geneva Motor Show, the SCG 003S represents one man’s vision of the ultimate supercar.

Jim Glickenhaus, an affluent North American car collector whose name circled the globe after his commissioning of the stunning Ferrari P4/5, has decided to start his own company, focusing on the manufacturing of high performance street and track vehicles. Present in Geneva with two models, Scuderia Glickenhaus came forth with an unprecedented offer: it would give its buyers a modular automobile, which can be turned from a road going vehicle to a track day machine and vice versa in an hour or less, just by swapping certain components.

Based on the same chassis and sharing more than 90% of the features, the two cars present, the SCG 003S (for Stradale) and SCG 003C (for Competizione) are essentially the same – with the exception that the track car was equipped with a race kit (tires, rear spoiler, lights and a different engine). The SCG 003S is the more “civilized” of the two and it is certified for rolling on public roads.

A joint venture between GranStudio’s team lead by Lowie Vermeersch and Goran Popovic in collaboration with the know-how of Podium Engineering, the Stradale is essentially a LMP1 category race car for the roads. Although some visual cues point to existing cars (Ferrari Enzo for the nose cone, Lamborghini Veneno for the headlamp assembly and Nissan GTR for the side profile), the design is said to be original. 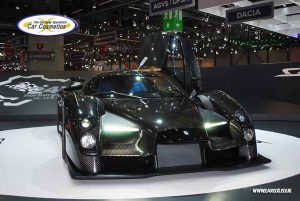 While that might be only partially true, the more interesting part comes with the modularity of the car. Select components, such as the wheels and tyres or front wings (which also contain the headlamps) are removable and replaceable, so if you fancy a track day in your brand new SCG 003S, you can easily swap the wheels, remove the necessary components with the help of specialized tools and burn some rubber. When you are done, you need only replace the parts and off you go to store your precious baby in a garage.

Fully homologated for road use, the car circumvented a few rules, which we will detail in the following lines. As such, the actual minimum height of the car and of the front wing is lower than it would appear, whilst still being able to meet FIA regulations. The trick, as Glickenhaus himself explained, lies in the fact that the ridges present on both of the two elements actually meet the regulations, not the glasshouse itself or the entire wing profile, thus allowing it to further lower the car in order to obtain a lower drag figure. The same ploy applies to the side mirrors. Situated on pods, just like in F1 and LMP1 prototypes, they actually aid the airflow and create downforce, whilst cameras mounted inside the sleek housing transmit images to twin displays in the cockpit. 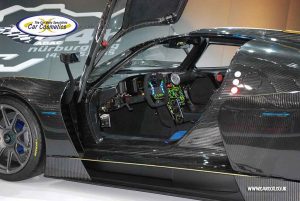 The cockpit of the SCG 003S was designed with functionality in mind. Carbon fibre predominates throughout, while the seats are race units with five point harnesses. The steering has a flat design both on the lower and upper portion, with LED gear change indicators encapsulated in the latter part. To each side reside two screens which relay the images transmitted by the rear view cameras mounted inside the rear view mirror covers, enhancing overall visibility.

The steering column, together with the hyper race-like control panel is adjustable and removable. On request, as the owner said, anything is possible, including leather upholstery and cup holders! 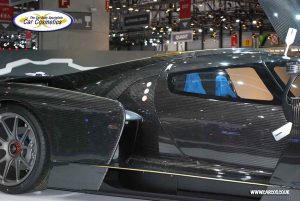 Powered by a 3.5 litre twin turbocharged V6 that will be derived from the Honda unit used in the Competizione version, the SCG 003S will also have a Hewland gearbox with paddle shifters, a full carbon fibre body weighing a mere 1,600 pounds and a race ready, push rod suspension that can be swappable if damaged or if the owner desires a different set-up.

While not yet raced, the track record of Glickenhaus recommends it as being a highly skilled individual and a perfectionist. Adopting a slightly reclined, LMP1 typical setup for the seats, the driver will be situated in a tight cockpit, surrounded only by the bare necessities. Other amenities can be ordered, as Scuderia Glickenhaus wants to resemble legendary coach builders, but we doubt that many would want to dilute the race ready experience of the car. Expected to race the 24Hours of Le Manns Race, the supercar is headed for the test that will certify if Jim Glickenhaus’ claims stand as valid. 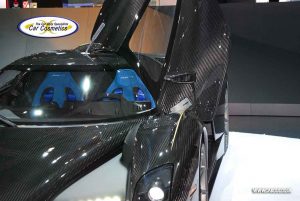 Constructed from carbon fibre, the car boasts impressive modularity. Thus, not only is the owner capable to replace the panels of the car with the race version ones in case a track day arises, but any damaged panels or components can be easily exchanged, including the suspension and roll bar. The engine powering the SCG 003C is a Honda unit, further developed by Autotechnnica Motori, which means that it will be highly efficient.

The flexibility of the construction means that it too can be replaced with anything the client might desire. As for the SCG 003S, a similar engine, yet with an in-house design, will be available to buyers. Electrical components come courtesy of Shell Motorsport, while Dunlop is supplying the rubber. 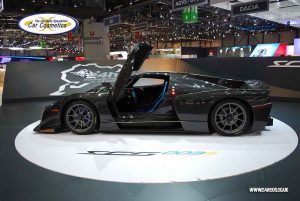 Having a quoted price of 2.1 million Euros (or approximately £1,541,284), the Scuderia is not a cheap car by any means, the cost going above every other manufacturer on the market, including the 1,500 horsepower Koenigsegg Regera. Justifiable by the fact that it is backed up by a single man and that being a small volume producer the company founded by Glickenhaus will recuperate only part of his investment, it seems relatively reasonable. But, to put it into perspective, for that price you could buy 8 Lamborghini Aventadors or roughly 350 Dacia Saderos! 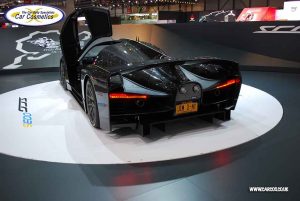 As Jim Glickenhaus stated, the only perk you could have with the SCG 003S is to have your wife wear a skirt and enjoy the spectacle as she is trying to get out of the car! Jokes aside, the supercar will not compete with mini vans, as the steering wheel must be removed when the driver is to be seated, demolishing any potential dreams for luggage space. However, due to the turbocharged engine, it will produce less emissions and it will be more economical, whilst still being drivable on the road and on the race track.

Want to know more about the SCG 003S? is so click here.