Belonging to the same company that brought forth the Quant E and Quant F, the QUANTiNO functions on the same principle as the two vehicles that preceded it, but it takes a much more compact form.

Instead of having a lean, supercar-like allure attached to it, the QUANTiNO’s role is not that of being a spearhead product for the manufacturer, but an entry-level product, destined for mass production. Smaller and lighter, the car is supposed to compete, in parallel, both with existing models on the market as well as the next generation of electric vehicles – and yes, in case you’re wondering, Tesla is a target, as are the upcoming products from Nissan and General Motors.

First things first – the looks. If one was to line up a Fiesta and a QUANTiNO in front of a blind man and ask which one looks better, the blind man would regain his sense of vision when seeing the latter and most likely lose it again when looking at the other one. It’s that good.

In a world dominated by blandness and governed by the fear that if a design is too progressive, buyers might steer away from it, the QUANTiNO stands proud as the best looking compact on the market. Full stop. It’s not a groundbreaking product made from anti-matter, but the liberal and creative manner in which its lines flow is so appealing that it would sell itself, with no advertising. Or maybe just a little.

Borrowing design cues from its larger brother, the Quant F, the compact is still able to retain its own personality, but in a manner different from say, Audi, which all look like differently sized clones with different badges. It’s more of a…Ferrari type of variety – some elements are there, but as a whole, it’s a different beast. 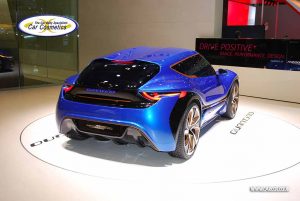 The front fascia features a unique nose, with two air intakes built into the bumper, similar to the F. The bonnet sits lower than the wings, which are rounded and follow the contours of the wheels. The A pillars, alongside the huge 22 inch wheels come directly from the F. Aside from that, everything is bespoke to the car. An interesting touch is the black flank running from the front to the rear wings, splitting the vehicle in half, making the QUANTiNO look balanced in design and very appealing.

Diving towards the rear, the roofline ends in a hatchback like profile, although the curve attenuates any sharp angles. In fact, just like the E and the F, the QUANTiNO is mostly built from curves – not a bad thing, by all means, as it lends it a distinctive appearance in the current marketplace. 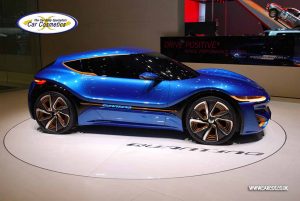 Characterized by a minimalistic design, the cabin space of the QUANTiNO is mostly barren. Residing behind the squared steering wheel, a digital instrument cluster with soothing blue light conveys to the driver essential information, such as current speed and range. Embedded into the dashboard, a screen – presumably with touch sensitivity is in charge of the infotainment system, while two circular knobs are the only other physical control on the dash. A tablet support is built into the central console, supposedly serving as an additional source of entertainment or having a charging function. The trim, as displayed, is either brushed aluminium or wood, with the choice being in the hands of the client. 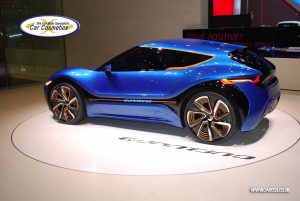 Powered by the infamous Nanoflowcell system patented by the mother company, the QUANTiNO will be an all wheel drive vehicle. Four three-phase induction motors, alongside a torque vectoring system will insure optimal torque delivery, in a continuous, progressive manner.

Unlike the mad 1,000 horsepower Quant F, the compact version will have four separate electric motors, each outputting 25 kilowatts, for a total of 136 horsepower and 124 miles per hour top speed. The novelty is represented by the low voltage output of the electric drive – only 48 volts, with a peak of 52. What does that mean? Well, for starters, the entire assembly will be more stable, minimizing the risk of failure and loss of power. You wouldn’t be too happy losing charge in the middle of a busy motorway, would you? 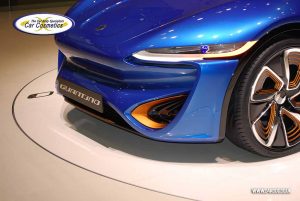 As everything is still in the prototype phase, there’s no concrete word on how reliable the compact car would be in real life. Moreover, the Nanoflowcell technology, until it gets to mass production, is still labelled as “experimental”, so there’s no telling how it would fare.

As a side note, as we shared in the Quant F review, the cars running on this tech would need specific charging stations, requiring massive investments in infrastructure, with expenses supported by…who? Presumably the government, but the ionic fluids are not electricity, so a greater effort would have to be made, unlike the current situation with electric charging stations. Let’s remain optimistic, however, as even as pure concepts, these cars do have an appeal unmatched by anything else. Who knows, perhaps in a few decades we’ll see vehicles powered by Nanoflowcell. 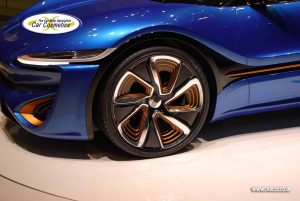 As with the F, the QUANTiNO has a non-disclosed price, but the company hints, on its webpage at a cost that would rival production run compacts. So… a competitor for the Astra and Fiesta? We’ll wait and see. Regarding fuel economy, the estimated rage would be 620 miles on a single fill of liquids. Impresssive? Yes, but until now, it’s all on paper. Further judgment reserved! 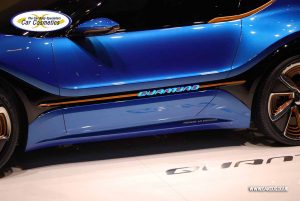 Following the same 2+2 architecture as the F, the QUANTiNO will offer seating for four adults. A two door option only, the rear seats would be accessed by folding the ones in front, but since the door opening is ample, nobody should have any difficulty in doing so. The A pillars, in conjunction with the double bubble roof, should provide sufficient headroom for tall occupants, but the rear seat passenger might feel a bit intimate due to the small rear window and low roofline.

With a length of 3.91 metres, the QUANTiNO would make an ideal urban car, as it would take minimal parking space and could be a worthy alternative as a commuter vehicle. Until it gets to mass production, we are limited to admiring the genius behind the stunning looks and the Nanoflowcell technology and hope that perhaps, we’ll see it in traffic someday.

How to Calculate Your Fuel Consumption Pininfarina Ferrari Sergio