Being in production for over 50 years, the Porsche 911 has become an integral part of Porsche, surpassing the title of “a model”, morphing into a true living legend. From the early developmental prototypes presented in 1963 up to the latest leaked pictures of the new generation GT3 RS, the three number code has become one of the most revered in the automotive industry. Undoubtedly a symbol of elitism, unequalled prowess and superior performance capabilities, the slender sports car remains one of the most recognizable in the world.

The visual impression left by a Porsche 11 is a memorable one. In over 5 decades, its overall shape, although it went through an evolutionary process, has remained as recognizable as ever. You won’t confuse a 911 with any other sports car in the world. Slender and aerodynamic, its teardrop shape, with the steeply raked windshield and arched roofline, has changed little over the years. Its wide hips, owing to the larger track tires in the rear, are a visual element that is bound to impress, especially in the 911 Turbo variant, that includes incorporates high flow air intakes.

Frontally, the 911 is characterized by the signature oval headlamps (Bi-Xenon as standard), which include, in some specifications, a LED ring, serving as day-running light. The side indicators also benefit from the same technology. The bonnet has no elements, including power domes or ridges, to interrupt its smooth flow. Actually, the name should be that of booth lid, as underneath, a storage area is located, while the boxer engine resides in the rear of the car. The front bumper has ample air intakes, serving both a functional purpose, but also being a nice aesthetic touch, reinforcing its performance oriented nature. 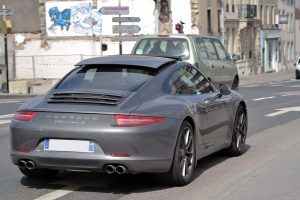 While comparing the Porsche 911 to the competition, we couldn’t ignore the fact that the Porsche has the cleanest lines in the class: you won’t see conflicting curves and straight angles – in fact, the most consistent feature that it sports are curves. From the side, the only elements that interrupt smooth metal surface are the door handles, which protrude and create a slightly contrasting feature. The remarkable thing is that even the side skirts are neatly integrated into the design of the car, circumventing the aftermarket parts strapped on to the wrong car aspect – we’ve encountered this “feature” at other manufacturers and it somehow spoils the overall aspect of the vehicle. Plus one for Porsche from our standpoint, but the matter of personal preference may also come into play.

The rear bumper accommodates four exhaust tips, two on either side, flanking the air diffuser. The LED technology rear lamps are slimmer than the ones from the previous generation, but also more stylish, as they give the backside a suppler form. 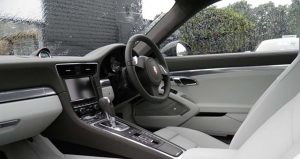 The interior setup is a blend of luxury and racing DNA. The instrument cluster is arranged in a typical Porsche fashion, with the large tachometer in the very centre and the rest of the dials sitting on the left and right. The three spokes – aluminium, that is – leather wrapped steering wheel allows plenty of grip.

According to specification, paddle shifters made from the same material sit behind the wheel, but a stick shift is also available, for the purists, although this option becomes less present by the day, as most manufacturers decide to ditch it in favour of the semi-automatic alternative. Leather, aluminium, piano black inserts or even carbon fibre can be ordered as interior trim, but if you want to step beyond that, Porsche has an exclusive department catering for those who treasure individuality above all, with the limit being the size of your wallet. 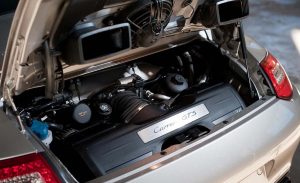 The Porsche 911 Carrera comes standard with a six cylinder boxer engine, sporting a displacement of 3.4 litres. 350 bhp are directed through the rear wheels, enough to propel the car to 179 mph in 4.8 seconds for the 7 speed manual and to 178mph and 4.6 seconds (or 4.6 Sport + option) for the PDK transmission. Small tweaks, such as the balanced nature of the car, make it a more sensible choice than the Audi R8.

Moreover, although the engine is situated in the rear of the vehicle, the front won’t dip each time you brake, a result of careful engineering of the suspension. Push it a bit and from a tame and fairly easy to drive machine it will transform into a road-eating monster. Linear acceleration and consistent power delivery make it an excellent driver’s car; its mostly aluminium construction does show, making it much more nimble than you would expect, reinforcing Porsche’s reputation of manufacturing quality sports cars. 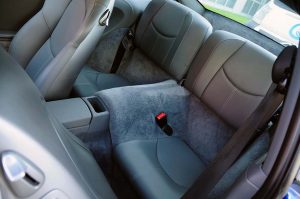 Benefitting from a vast experience, Porsche is the embodiment of German quality, so engine malfunctions and other mechanical failures are quite rare. On the other side, putting the car in service will cost you a few pounds, as genuine parts are expensive, but a maintenance service is required by the manufacturer only every two years. However, be prepared to fork around £1000 or in the vicinity of the said sum, but this is the side effect of buying a luxury sports car.

The base Porsche 911 Carrera, with the manual transmission, will cost you £73,509, while the model with the PDK option will have a £75,897 price tag. Porsche cites the Carrera’s mileage performance at 31.4 for the manual and 34.4 for the PDK, but real life conditions may differ, especially if you drive in a sporty manner. Sat-nav, leather upholstery, Bluetooth connectivity and automatic climate control come as standard.

As mentioned, you also get Bi-Xenon headlights as well, even on the base model, but we’d advise against any extra options, as they’re very expensive and the vehicle already offers an excellent value for money, especially if you think about the status symbol it already provides. 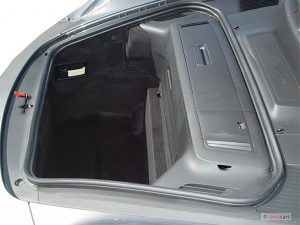 Although purchasing the Porsche 911 for its storage space and practicality will most certainly fall on a second or third place according to personal preferences, the sports car is not something to laugh at. The driver and passenger seats provide excellent lateral support and have an array of adjusting positions. The two seats in the rear provide decent room for occupants, but tall persons may feel that it’s a bit too “intimate” as the steep slope of the roofline may be a hindrance, so long journeys in the back are not recommended. The boot space measures 115 litres, which is enough for the occasional bag, but we wouldn’t count on it as heavy hauler – you should try the Cayenne for that!

Want to know more about the Porsche 911 Carrera then click this link.