Bearing the name of Pininfarina Ferrari Sergio, the latest bespoke model to come from Ferrari is a hallmark in the Prancing Horse’s history, as it celebrates 60 years of collaboration with the design house. An evolution of the concept bearing the same name, the final incarnation of the Sergio features a much more toned down look, presumably in order to comply with on-road safety regulations, but seems to have lost some of its initial flair in the process.

An homage paid to the founder of the company, the Pininfarina Ferrari Sergio evokes the purity of the lines characteristic of Ferrari models of the ‘60s and ‘70s, mirrored in the exterior design, while the modern mechanicals serve as a powerful bond to the present. As Sergio himself once said: ‘It is essential to preserve our heritage by making it part of our future” and by following that creed, the car bearing its name came to life.

According to Ferrari, the vehicle’s development, from its nascent stages as a sketch to the stage of a genuine road going sports car took only four months. The exterior shell and parts of the interior are the only things that are new, which explains the swift process.

As we mentioned, the concept’s lines have been toned down and that makes the overall impact of the vehicle a little lower than the original iteration, but that is what usually happens when manufacturers produce road going versions of their concepts.

One of the most interesting points of the sports car is its two tone paint job, which is in place to balance the volumes of the vehicle, as well as to conceal the air intakes and leave the rest of the body free of any other alterations, so that the lines are able to flow uninterrupted and the premier paint to stand out. The bonnet, the suspended front bumper, the rear diffuser as well as the A-pillars and part of the vehicle’s side are painted in a matte shade of black. As an additional element, the headlamps are joined by a black strip, creating a very curious visual effect. 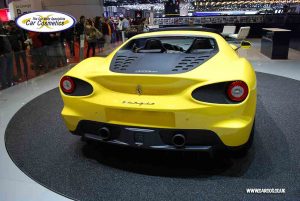 Built as a pure open-top sports car, there is no cupola of any kind. Instead, the windscreen and the uniquely shaped rollbars create a stunning visual effect. The rollbars themselves are separated from the seats, merging with the slender flying buttress. A modern reinterpretation of a Gothic architecture element, the flying buttress is a design element used by the Prancing Horse for models such as the Dino or the 599 GTB/GTO. Present here in a more back-to-the-roots form, it incorporates both the air extractors for the gearbox oil and clutch cooling and the rollbars, but in addition it acts as a downforce generator, creating a giant spoiler effect.

The rear, although it takes a retro form, reminds us of the 458 Spider and the Speciale, but also of the 488GTB, the upcoming entry level Ferrari, whose rear end features heavy influence from the Pininfarina Ferrari Sergio. With a massive air diffuser, two blacked out exhaust tips and a subtle spoiler placed between the two circular rear lamps, the Sergio’s connection to the 458 is all the more evident, underlining its performance oriented character. 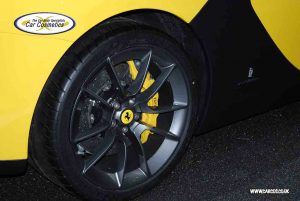 Although the concept car had a much more personalized air, the production version of the Sergio’s interior is strikingly similar to the stock 458’s cockpit. The steering wheel features an integrated LED strip and is leather wrapped, with contrasting stitching in the colour of the car. The A/C vents have the same shape as the ones in the aforementioned vehicle, as the controls and buttons. Carbon fibre inserts, together with a different seat design and a plaque mounted on the dashboard are the only elements that are different and which, in our view, reduce the exclusivity factor of the car. 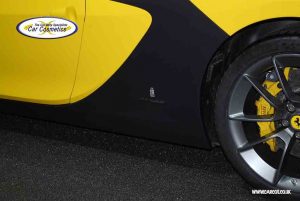 The Pininfarina Ferrari Sergio shouldn’t behave any different from the car it is based on, that is, the 458 Spider. As follows, it has a 4.5 litre, naturally aspirated V8 engine capable of producing 605 horsepower and 398 lb ft of torque, with the redline sitting at 9,000 RPM. Yes, it will be loud. A 7 speed, paddle shifter operated semi-automatic dual clutch transmission is in charge of transmitting the power to the rear wheels, enough to propel the Sergio from 0 to 62 miles per hour in 3 seconds flat.

Having a permanent open top construction and an estimated top speed of over 200 miles per hour, it means that it will destroy your hairdo every time you press the throttle, but invariably, will plant a huge grin on your face that won’t disappear until you get out of the seat. Moreover, you’ll have another advantage: you can take a cold (or warm) shower every time it rains, because there isn’t even a storable soft or hardtop available; just remember to bring your shampoo and a towel with you! 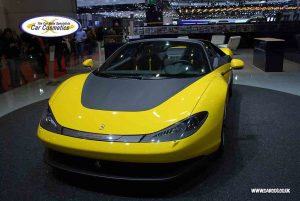 Having been the target of countless spontaneous combustion jokes for the better part of the last three years or so, as cars burst into flames for no apparent reason, Ferrari has (presumably) taken action and resolved the issues of their super sport fire chariots. Other than that, the tyres should be the only other recurring cost, as they wear off quickly if you drive it in a sportier manner.

If you do so, keep in mind that the car will need frequent refuelling, lowering the fuel economy (not that you might care, if you own a Ferrari). Minor problems, such as faulty dash lights and non-functioning speakers have been reported, but in comparison with older models, the 458 represented an immense improvement in build quality and reliability. 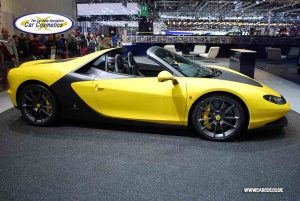 Produced in a limited run of six examples only, each Pininfarina Ferrari Sergio features a price tag of only 3 million US dollars. Each customer was invited by Ferrari to buy the car, so if you were interested in acquiring one – tough luck: they’re all sold.

In addition to the hyper inflated price, there shouldn’t be much to worry, as the internals belong to a car that is relatively common. However, the majority of the cars will most likely not see a stretch of road or a race track as they were bought either as showcase models in a private collection or as further investments. 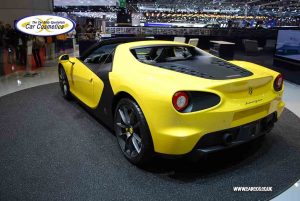 Perhaps one of the last things on the list of buyers with very deep pockets, practicality in not a word someone would associate with a roadster. The boot measures 110 litres, which is about the same as an Alfa Romeo 4C, so it might be able to carry some of your luggage, but most likely not all of it. You do get the option of having a bespoke luggage set that will fit the boot and another one sitting behind the seats, but again, don’t bet on having those golf clubs fitting inside.

Want to know more about the Pininfarina Ferrari Sergio? then click this link to the official website.