The Nissan Cube has been, undoubtedly, one of the most peculiar looking vehicles ever to roam the streets. In an attempt to appeal to the young urban population of Japan, Nissan has introduced a vehicle with unconventional styling, that some may even call ugly. 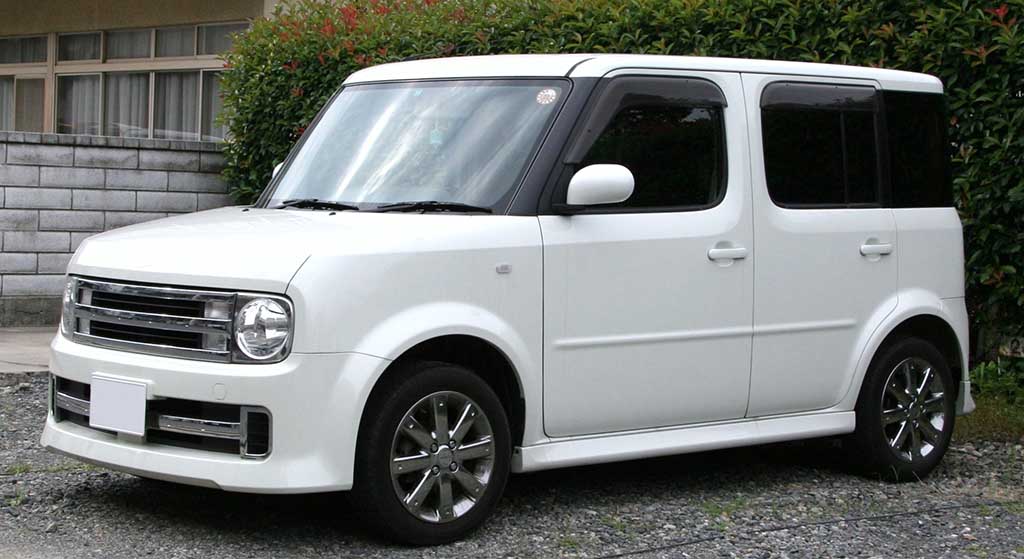 The closest counterpart, in terms of looks, is the Scion xB. Scion, Toyota’s youth oriented automotive division, has a history of introducing boxy looking vehicles on the market, which proved to be quite popular in the home country.

Following the same trend, the squarish Cube (hence the name) has gained a respectable following in Japan. Officially, until 2010, the Nissan Cube was not sold by dealerships in the UK but rather imported by individuals and brand enthusiasts. Nissan, not insensitive to public demand has observed this trend and introduced, in the same year, the model in question to the British market. The unusual styling, generous interior and unconventionally laid out cabin space lead to an enthusiasm amongst the ones who wanted to stand out in the crowd of Fords and Vauxhalls. However, the wave of excitement didn’t last for long, as in 2011, the Nissan Cube was officially withdrawn from the market, following less than satisfactory sales, the only examples remaining being in the possession of a limited number of dealerships and, of course, owned by individuals.

More than 1000 examples are estimated to have been brought in by Nissan itself, without counting the ones that were imported prior to 2010, so that makes it even more special, as you won’t see one every day.

The front of the vehicle is characterized by a spectacle-like headlamp design, with a silver grille in the middle. Below it, a thin, subtle slit draws additional air into the engine compartment, while the front bumper has two circular fog lights that flank the air intake that resides between them. Extending a bit above the headlamps, the bonnet is flat and aerodynamic, no other visual element disturbing its clean lines. 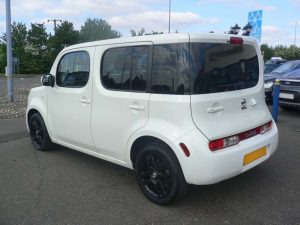 The side profile is very MPV-like, but prefers to employ a boxier image rather than a swept back design. The windows are more receded than the metal of the doors, and that applies to all the glass surfaces of the car, save the windshield. An asymmetric window design, that stretches from the rear door up to the right B pillar breaks the monotony of the lines and further makes the Cube stand out. In the rear, the lights follow a similar design to that of the headlamps, flanking the centre mounted Cube name. A handle placed on the right side is used to open the rear door, while a red stop light, mounted in the centre, close to the roof, is the only thing worth mentioning.

Inside, the interior is as unconventional as you’d expect by looking at the exterior. The front seats are joined, which makes for little lateral support, as well as a lack of depth as they are mostly flat. The glove box compartment is relatively small and can only hold small items, when cup holders are in place, although their presence does not excuse the lack of storage space. Considering that this is an urban vehicle and not a furniture hauler, we can overlook this flaw, but after all, it’s up to the buyer and personal preference.

A single motorisation option was offered with the Nissan Cube, namely a 1.6 litre petrol engine, capable of producing 110bhp and 113 lb ft of torque. A manual or a CVT transmission could be mated with the engine, but we would recommend the latter, as it offers a much smoother ride than the former. On the road, the Nissan Cube is surprisingly nimble, as it is able to navigate with ease through the city. The suspension is a bit on the soft side, which is nice when rolling over potholes, but at high speeds, the lack of firmness of the springs makes for noticeable body roll.

With the manual gearbox installed, the rated top speed was 109mph, which decreased to 105 with the CVT, and the acceleration figures from 0 to 62mph took 11.3 seconds for the former and over 12.4 seconds for the CVT.

The propulsion unit has not received any complaints from the owners, the main gripes with the car being dashboard, which started to produce creaking noises after some time and the quality of the materials employed throughout the cabin. The car received a four star Euro NCAP score, so it’s not the best out there, but then again, the 2011 Jeep Compass scored (surprise!) two stars, so there shouldn’t be a lot of concerns on the safety front.

The car was initially sold for a price ranging around £13,000, but, as it is no longer in production, you will be probably able to snag only a used one and at almost half the price. The quirky meant that it was a head turner, but not especially owing to its beauty. It depreciated quite quickly, and only better equipped models fetch around above £8,000. Offered with only a 1.6 petrol engine, with either a manual or a CVT, it managed around 42.8 miles per gallon – not bad considering its generous dimensions. 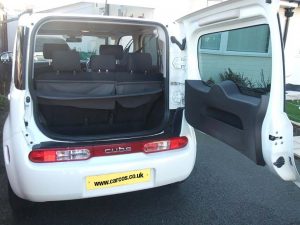 The front seats are joined, which makes from quite a peculiar aspect and the back seat is not entirely comfortable. However, there’s plenty of leg and headroom, so nobody will be able to complain about sitting cramped. A pleasant feature is the fact that the rear seats can recline, but doing this takes away from the practicality of the boot. Speaking of the boot, it measures only 255 litres with a maximum of 403 with the back seat folded, which is rather limited. The single hinged rear door provides ample access, but this tends to become problematic in tight parking spaces, when it becomes difficult to use.

If you’d like to learn more about the Nissan Cube visit this link.