Perhaps one of the less than beautiful entries in the SUV/crossover segment, the Mitsubishi Outlander is still one of the best cars when it comes to value for money. Leaving aside the appearance, the car focuses more on its utilitarian side and reasonable fuel consumption than on looks. 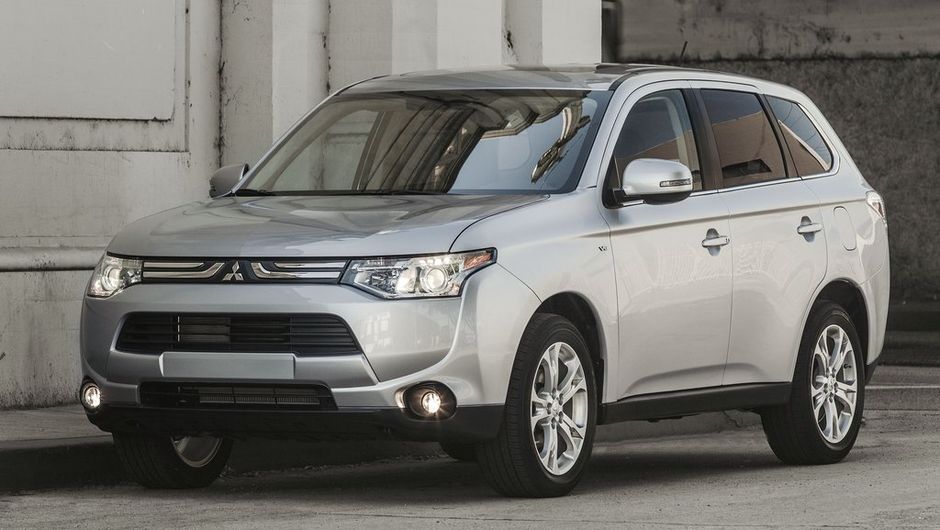 Following the ever increasing interest for environmental protection, Mitsubishi has decided that even the Outlander, a large SUV with off-roading capabilities, can be part of this movement. Thus, the model is offered in both diesel and hybrid form, according to preference and budget.

Staying true to its off-road heritage, it’s one of the few SUVs on the market which comes with 4 wheel drive as standard, whereas the competition asks you to pay extra for that feature. Moreover, should there be a need to transport more passengers, two extra seats are located in the boot (lying flat with the boot floor) and can be used, but due to the limited space, we would only recommend them for limited use by adults. Children, however, should have no difficulty in finding them comfortable.

The front is dominated by the sleek headlights and the thin chromed grille, which also incorporates the Mitsubishi logo. The front bumper incorporates a large air intake, with fog laps sitting at the extremities and black plastic protection element all around the car. Also, there’s an engine shield to protect the power plant in case the driver feels ventures off the normal driving surface.

The sides of the car are equally sleek, as there are no design elements to perturb the flow of clean lines; the mirrors have integrated, clear glass indicators. The window line profile becomes thinner towards the rear, as the roof plunges slightly, and it is framed by a chrome ornament. Due to its less than edgy nature, the rounded, smooth lines of the Mitsubishi Outlander allow it to be the most aerodynamically efficient model in its class – no wonder it is so fuel efficient!

Venturing further, the rear of the vehicles houses the clear glass, rear lights, which feature mostly white tint, becoming bright red (and orange) only when needed. A horizontal thin strip of chrome connects the lamps, balancing the proportions of the rear end. Underneath the rear bumper, the single exhaust sits out of sight, leaving only the gray coloured low portion of the bumper to stand out. 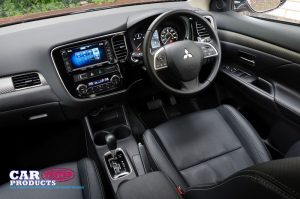 Inside, the Mitsubishi Outlander feels somewhat behind the competition. Whereas rivals such as Nissan and Toyota have opted for more dramatically styled interiors, Mitsubishi has chosen to provide a functionality over form approach, as everything serves a certain purpose, but, sadly, in a dull manner. Although it offers Bluetooth connectivity, a rear view camera and leather upholstery, not everything is standard and that means you have to fork out more money for options. Moreover, the quality of the materials employed in decorating the cabin aren’t of the greatest quality, so that might deter some customers.

All the models in the diesel range have a 2.2 litre in-line 4-cylinder turbocharged engine, which develops 147 bhp and is capable of reaching a top speed of 124 mph. Transmission comes in either manual or automatic form (6-speed), but the best acceleration figures are reached by using the former (10.2 seconds from 0 to 62mph), while the latter manages to reach the 62mph mark in 11.7 seconds. The suspension settings allow for a very comfortable ride, but the weight of the vehicle does take its toll, as cornering at high speeds tends to accentuate the body roll. The PHEV model makes use of a petrol engine-electric motor combination that has a total power output of 204 bhp, but due to the increased weight (due to the battery pack), is less nimble than the diesel version.

The diesel propulsion unit is already a proven contender in the auto industry, as it has been used time and again by the manufacturer. Its excellent build quality ensures little to no mechanical damages reported and overall, the car feels solidly constructed. In terms of safety, Mitsubishi advertises on its UK website that the Mitsubishi Outlander has obtained a perfect, 5 out of 5 stars at the Euro NCAP tests, meaning that it will not only protect the occupants of the vehicle in case of collision, but also the other party, as it employs a host of active and passive safety features.

The cheapest Mitsubishi Outlander costs £23,984, while the top of the line model has a price tag of £34,234. In the case of the Outlander PHEV, the prices range from £33,304 up to £40,054, depending on the trim and options, but unfortunately, except for the hybrid system, Mitsubishi does not offer any differentiating element – visually – that the car is different from the diesel version, which is unfortunate, considering the premium paid over the conventional propulsion model. In terms of consumption, the diesel manages to reach 52.3mpg with a manual (combined cycle), while with an automatic transmission, the mileage hovers around 48.7mpg. The champion, however, is the hybrid, which returns 148mpg and due to its nature and limited emissions (44g/km) is exempted from road tax. 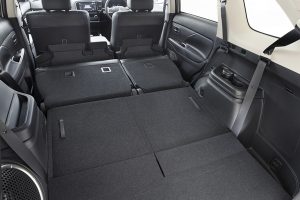 Having one of the largest boots in class, the standard storage space measures 591 litres and with the seats folded it can be extended to a further 1,022 litres. Interior space is plentiful, while the back seat passengers will enjoy decent leg and headroom. The third row of seats is better to be avoided by adults should a long journey lay ahead and used by children instead, as the place is quite limited.

Thirsty for more information on the Mitsubishi Outlander? Take a look here.