Quite possibly one of the most controversial sports cars that Mercedes has produced to date, the Mercedes McLaren SLR was a curious crossbreed between a GT and a pureblood supercar.

With incisive looks, but burdened by excessive weight, the Mercedes McLaren SLR, despite its carbon fiber construction, was not considered a part of the supercar clan, which, at the time, included the Porsche Carrera GT, the Lamborghini Murciélago and the Ferrari Enzo.

Its inception is related to a collaboration between Mercedes Benz and McLaren Automotive, in an effort to create a high performance automobile that could benefit both from German craftsmanship and McLaren’s Formula 1 experience. Unlike the F1, which brought the British marque worldwide acclaim, the SLR was not meant to be a record setting machine. Safety, comfort and usability were deemed as priorities, while the super sport capabilities were secondary. As a result, the car was rather slow – accelerating to the top speed of 208 miles per hour only lead to gluing your eyeballs to the rear window, instead of ripping them apart. Which was acceptable.

Its looks were inspired by the stunning 1955 Mercedes Benz 300SLR, which won the World Sportscar Championship of that year. With a more modern twist, the 2000’s Mercedes McLaren SLR was an aggressive shark mouth monster. The cabin, unlike that of its competitors, was pushed as far back as possible, a counter reaction to the cab forward design charactering the majority of the supercars. The long bonnet featured a phallic central snout ending with the tri-star badge on it. A reference to Formula 1, it created an arresting visual effect on the onlooker. The subtle grille with two small finlets on either side was flanked by the double oval headlamps, a characteristic of Mercedes vehicles of that time, but here in a more back-swept manner. Below, a huge front bumper with an uncanny resemblance to a shark’s mouth also housed two small, circular fog lights.

Integrated in the front wings were two air expellers shaped in the form of shark gills, with two horizontal metallic shards breaking the monotony of the lines. This feature was also mirrored on the bonnet, where two high airflow vents allowed the engine to evacuate heat. Just below the shark gills, the short exhaust tips resided: this not only produced thunderous barks, but also meant that your foot could get burned from all the heat expelled through there. 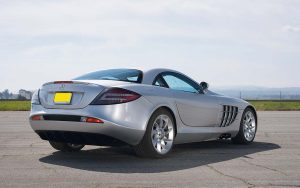 Other elements of interest were the large, 19 inch alloy wheels which featured a turbine-like appearance and the hyper compact rear end, with only the LED rear lights and huge air diffuser as points of interest. The SLR also possessed an air brake, which deployed automatically according to need, but could also be controlled via a switch in the cabin.

The Mercedes McLaren SLR was produced in Woking, Surrey, from 2003 up to 2010, when the last example rolled off the production line. Manufactured in both coupe and cabriolet (with a soft top) form, the SLR, aside from the special 722 series (640 horsepower as opposed to the regular 617), also had a McLaren produced variant, in late 2010. Limited to just 25 vehicles, the final edition boasted a modified body kit, smoked headlamps, custom made wheels, McLaren badges finished in red and a sports exhaust. 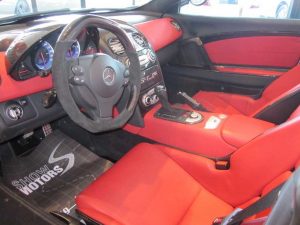 The cockpit of the Mercedes McLaren SLR was extremely well garnished, as the mother company saw suited that it is better to have more than to have less and desire it afterwards. Following this philosophy, amenities such as air conditioning, dual-zone climate control, adaptive cruise and a Bose branded audio system were fitted. Moreover, premium leather covered the dashboard, armrests, central console, door faces and rear cabin panels. This not only made it beautiful to sit in and admire, but also heavy – more on that in a moment.

The instrument panel was finished in matte chrome, while the swing-wing doors were capable of pivoting both forward and upwards for the ultimate “in your face” impression. 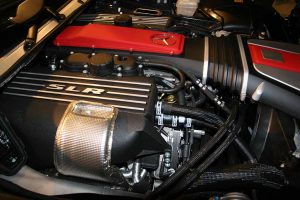 As mentioned prior, the Mercedes McLaren SLR was not feather light, and that showed on the race track, which was why the vehicle received so much criticism. Add to that the five speed automatic gearbox (and keep in mind that Mercedes was developing the 7 speed one, but decided to use the aforementioned unit) and more pieces to the hate puzzle start to add. 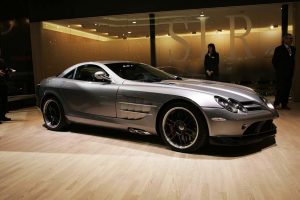 The Mercedes McLaren SLR has been lauded for its mechanical prowess. The engines were assembled manually, by a specialist, who also applied his signature to the unit, a feature reminiscent of AMG produced power plants. From the moment the customer placed the order for the car, a factory tour was offered to the buyer, together with VIP treatment and the assignment of a liaison manager that provided support both prior and after the purchase.

The best thing of all? The car could be serviced at a local authorized Mercedes dealer. Oh, and the ceramic brakes would glow red and catch fire if you pushed them. 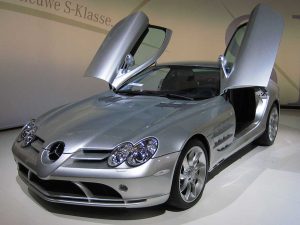 The price for a new Mercedes McLaren SLR started from £313,465, but for that price tag you were spoiled beyond belief (for a supercar, that is). The price would go even higher for the roadster and the special editions. No other info was provided by Mercedes officially, except for the estimated fuel economy, which was rated at 13 mpg in the city and 18 mpg on the highway, but we expect those figures to fluctuate slightly, depending on how hard the car is pushed.

While at first you were forced to stay at home looking at the calendar as your name got closer to the top of the waiting list, you are able to snag one from the used market. Unlike the Enzo, which has risen well above its initial selling price, the SLR was not as fortunate and depreciation eventually occurred. As a result, coupes retail for about 180,000 and roadsters revolve around the 200/250,000 mark. Better deals can be made, but beware of hidden faults and remember that even though it has a Mercedes badge, at the end of the day it’s a supercar – and they don’t come cheap! 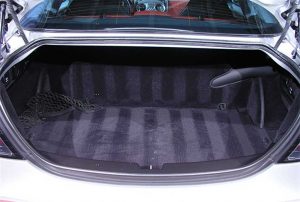 As one would expect, the Mercedes McLaren SLR was not much of a traveller’s companion. However, unlike its competitors, the car actually provided decent boot space. At 272 litres, it allowed for the odd hand bag to be stowed, as well as a golf club bag or a smaller sized friend. Inside, the driver was spoiled with seats made especially for its body configuration and air conditioning. Incorporated in the central tunnel between the driver and passenger has a phone, which could be hidden away when not needed and right behind the seats, an additional storage compartment allowed for the safekeeping of valuables or whatnot.

If in need of more information on the Mercedes McLaren SLR? Then click this link to find out more.