The Mazda 3, one of Mazda’s most popular vehicles, has returned in a new form. Bearing the third generation name, the new SkyActiv platform and a refreshed design, the latest of the Japanese hatches has come to fight with the class heavyweights. What’s more interesting is that globally, one of any Mazda models currently on sale is a 3, which prompted the manufacturer to re-evaluate the situation and invest more in the image of its bestselling vehicle. 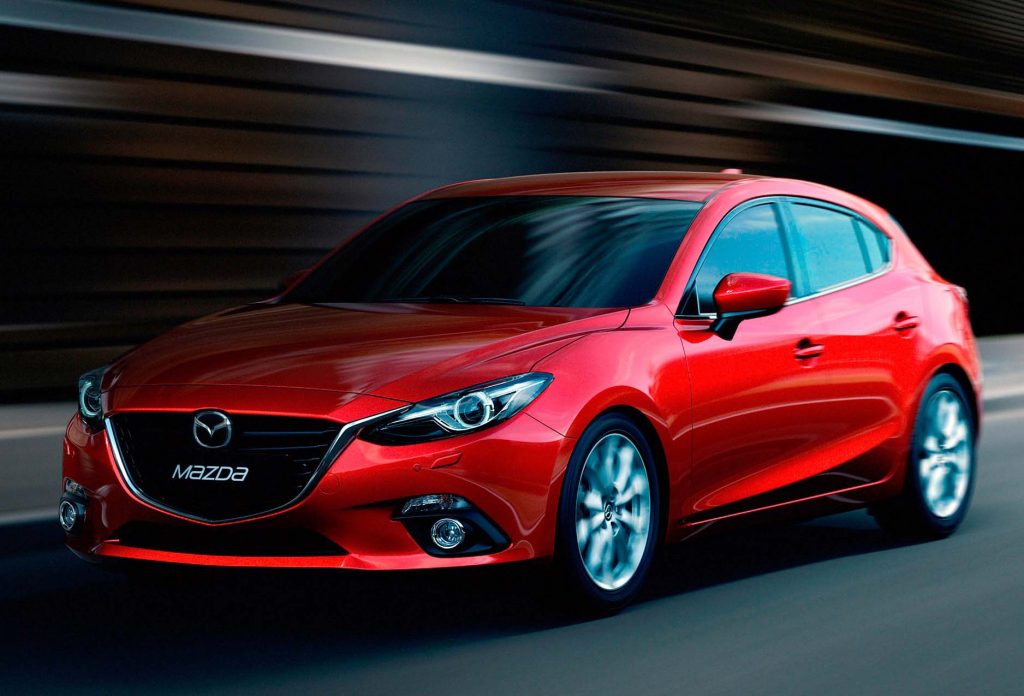 The SkyActive platform is characterized by the use of steel – more precisely, ultra high strength steel in the structure of the chassis, resulting in lowered body mass and greater torsional resistance. That means that the end user receives a lighter car with a higher degree of core component stiffness, which will improve not only fuel consumption, but it will be far safer that the preceding generation of cars. Moreover, high-tech engineering and production methods ensure that the moving parts are lower in number than in the conventional Mazda 3 and thus are less prone to get damaged over time.

In addition to this, the new hatchback features a redesigned body, based on the “KODO – Soul of Motion” design language, which replaces the famous but rather bland “Zoom-Zoom” trend that characterized Mazda models not so long ago. Focusing on elements such as light-play on the car’s body, sculpted surfaces and focus on texture as well as on form, the KODO approach seemed to be beneficial to the Mazda 3, as it looks better than ever.

The front is dominated by the new Mazda signature grille, a shield-like shape that cuts deep into the front bumper and is framed, on its lower portion, by a chrome line that goes up all the way to meet with the swept back, elongated headlights. Beneath that, a small air intake and a pair of fog lights on either side complete the picture. The long bonnet swoops down and seems almost organic if viewed from the side. Speaking of the side, the lateral view will put the Golf to shame.

Instead of opting for conservative lines like the Germans, Mazda’s designers went in the opposite direction. Sculpted surfaces and vibrant lines flow on its body – choose the Mazda 3 in a red colour and you will stare at it for hours. A long line, starting from the front grille makes its way up to the middle of the car and fades away; a second one, starting where the first one ended, flows all the way to the back, forming the shoulders of the car, which integrate part of the rear lights. The rear looks like a grinning samurai’s face; the roof spoiler incorporates a small shark fin, which is – surprise – also sculpted with the greatest attention to detail. Two sport exhausts, on either side of the rear bumper give it an extra boost of dynamism. Not that it needed it, anyway, but it’s a nice touch.

Unconventional, daring, dynamic, elegant, refreshing – all of these terms could very well describe how the third generation of Mazda 3 looks like. The sculpted surfaces give it a much more premium look than its shelf price and it’s very nice to see that level of commitment in a car that’s meant to be (relatively) accessible to everybody.

The interior is a fresh take on the matter, as it doesn’t feel dated and boring, but feels very “young”. The new profiled steering wheel, houses behind it a very handsome set of instruments, with the speedometer in the centre, flanked by digital screens on either side. The center console is well designed and the top versions receive a navigation screen a-la-BMW – not a bad thing, but the inspiration for it is obvious (the rest of the range gets the same touch screen, without the nav option).

The good news is that Mazda’s engineers have managed to make it much better than the old generation dreamed of being. The ride is very smooth, with the suspension filtering the bumps and potholes, but still managing to maintain body roll to a minimum. It feels very much like a Focus or a Golf – precise, quick and grippy, but it still has its own personality when it comes to handling. What’s more, the Mazda 3 is very predictable and it gives you, very fast, an idea of how much you should push it, which is a commendable thing, especially for younger, more inexperienced drivers.

Mazda has been known as a manufacturer that builds quality products –and the new generation of Mazda 3 doesn’t disappoint, as drivers have rave about it for its impressive built quality and ability to rely on both the engine and the rest of the mechanical parts. Seems that the SkyActiv technology paid off! Furthermore, an excellent 5 star rating at the Euro NCAP safety tests insures that you will feel both safe and problem free on board the new hatchback.

The basic Mazda 3 model, the SE comes at £16,995, with a 100bhp petrol engine and 6-speed transmission (55.4 mpg), while the top-of the range 165bhp Sport Nav also has a petrol engine, paired to the same 6-speed gearbox and manages a mileage of 48.7mpg. The diesel offer is limited by Mazda UK at the 150bhp diesel engine, paired either to a 6-speed automatic or to a manual and promises a combined cycle of 58.9mpg.

The new Mazda 3’s dimensions are close to those of its predecessor, although now it’s lower and wider, but it offers more space than the old generation did. However, the leg space is not tremendous, as you might feel a little cramped if you’re tall, and the small rear windows don’t exactly contribute to making the interior atmosphere brighter. The boot measures 364 litres – not bad, but then again, some rivals offer more. A fastback option of the Mazda 3 is already available for sale (a saloon for us mortals) and that version has a larger boot, at 419 litres.

Do you require further information on the Mazda 3? If so click here.