Undoubtedly the most angular looking car on the market today, the latest offering from Lexus comes in the form of a mid-size SUV. Boasting quite possibly the largest grille ever to be planted on the face of a car, the Lexus NX bets on being different as its main selling point.

Built in order to face the fierce competition in the mid-size SUV segment, the car competes with the BMW X3, Audi Q5 and the Range Rover Evoque, but, unlike its rivals, it offers a hybrid propulsion system.

Visually, it’s striking, to say the least. Some may even call it ugly, but it certainly differentiates itself from the rest of the pack.

Still recognizable as a Lexus, it has the same signature spindle grille and the thin LED strips underneath the headlamps, as well as the distinctive window line. The front is dominated by the massive grille, which occupies most of the space there. The headlamps are sharp and slightly recede into the bodywork, leaving only two thin air intakes (that also house the fog lights) as points of interest.

The profile, penned so as to resemble a sculpted piece of metal or the faceted sides of a prism, look like nothing else in the compact SUV segment. The downwards plunging roof line, coupled with the square shaped wheel arches and black elements presented all around do create a strong impression on the onlooker. In the back, the detailed rear lamps wrap around the sides of the car. A large roof spoiler adds a dash of sportiness, but overall, even though it has considerable proportions, they are carefully hidden by the clever design. Visually, that’s a commendable feat, but the weight does impede its dynamic performance. 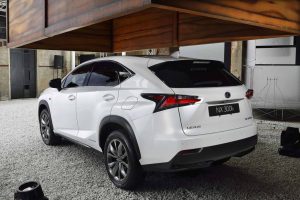 Two wheel drive is offered as standard, while the four wheel drive options requires you to upgrade to the superior trim level, forcing you to fork out an extra £2,000. Electric vehicle mode is also present in the base trim, along with 10-spoke, 17 inch alloy wheels and a Drive Mode selector, which enables to you to modify the behaviour of the car, ranging from Eco to Normal and Sport.

As expected, there are quite a few technological gimmicks that make the car stand out, such as the touch enabled interior lights, the touchpad that controls the vehicle’s menu, keyless entry and the door handles that lock the car when you tap a certain area on their surface.

Artist Will.I.Am has been selected to represent that brand image of Lexus, with the Lexus NX specifically in mind and a host of clips and images on Lexus’ website show him alongside the NX, lauding the angular nature and quality of the latest entry in the compact SUV sector.

ile we have talked about the exterior design of the car, now it’s time to focus on the interior.

The Lexus NX cabin has a modern and premium feel to it, as it makes use of bold lines and quality materials. The plastics have a soft, textured nature and do not feel out of place. Metal and wood inserts – as per preference – are strategically placed, so that the visual field of the driver of front passenger does not remain empty. A large colour display sits atop of the central console and a small, removable mirror (that you can take out with you) rests near the cup holder. Some people may find themselves bothered by the presence of a multitude of switches and buttons in the cabin, but that reflects Lexus’ way of showing off the high-tech nature of the vehicle.

The suspension, although tuned to provide the occupants with a comfortable ride, feels too soft on the road, as the weight of the vehicle and its dimensions do make themselves felt. The F-Sport variant tries to mend things by offering a stiffer set-up and a sportier feel, but little difference is felt. Part of the problem is owed to the engine, which feels underpowered and not as responsive as we wished it to be. Going past the 4,000 rpm point makes it noisy and less agile than its competitors, but it’s not a deal breaker. To experience its best side, drive it at a reasonable pace, as it gives the driver a reassuring sensation of comfort. Overall, the hybrid system, although very good, might need some tweaking, here and there.

The Lexus NX is built on the well known Hybrid Drive System, shared with Toyota Prius and other Lexus models, and has become, by now a classic. Almost an industry benchmark, the system is regarded as being one of the most reliable in the automotive world, with breakdowns ranging from few to non-existent. However, Lexus will offer a manufacturer warranty both for the car and for the hybrid system separately, just like Toyota does.

Offered only with the hybrid system, the car comes in five trim levels. The base model is the Lexus NX 300h S, costing £29,495, followed by the SE, Luxury, F Sport and Premier, which represents the top of the line, bearing a premium price tag of £42,995. For that, you will get ventilated leather seats, a Mark Levinson audio system, 360 degree cameras, sat-nav and 18 inch alloy wheels with a five spoke design and thinner side walls. All versions come with the same 2.5 litre petrol engine, coupled with to the electric motor and batteries, for the electric-only mode. Total power output sits at 197 bhp, with the top speed being 112mph. )-to 62 is done in 9.2 seconds and the fuel consumption figures hover around 56.5 mpg for the base Lexus NX S and 54.3 mpg for the more expensive Premier. 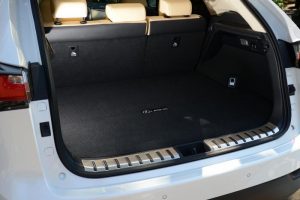 The interior space is plentiful, as both the driver and the passengers enjoy freedom of movement, so long drives shouldn’t pose any issues. The boot space itself measures 550 litres and the under floor compartment hides a spare wheel for those unfortunate times when you get a flat. This feature was added especially for the UK market; without it, a further 30 litres of space would have been available, but the back seats can always be folded to obtain a larger storage area, of around 1,520 litres.

Want to know more about the Lexus NX? if so click this link