“Forget butterflies. Put bees in your stomach.” These are the first words you’ll see when you access the Honda Civic Type R section on Honda’s UK site. Brilliant, isn’t it?

The newest iteration of the high performance hot hatch from Honda promises to “Get back from the red” (the red is the signature colour used in the car’s logo) in the summer of 2015. The previous generation of the vehicle has been discontinued due to lack of compliance with the strict European emission regulations, but Honda has promised that the new car will be well worth the wait. 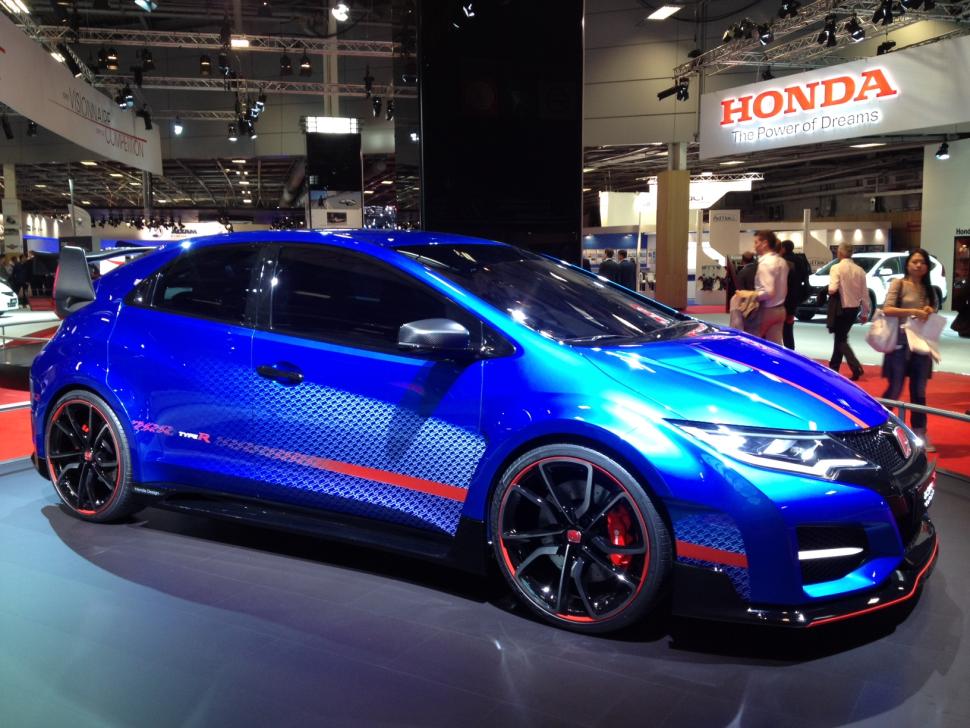 The new Honda Civic Typr R was reviewed at the Paris Motor Show in early October 2014, the model was on display wearing an electric blue paint with red accents, including racing decals.

In terms of looks, it promises to be one of the most – if not the most – aggressive Hondas ever made. The fascia features a slant, vented bonnet, with two creases that lead down to the massive black mesh grille that houses a red Honda logo. The bumper continues the grille’s design, black mesh being employed for it also. On either side, the air intakes each have a LED strip that doubles as fog lights. Day-time running LED’s are included in the structure of the headlights, underlining their sharp nature, while the bumper’s lip extension is accentuated by a red strip. The same element is found on the outer rim of the 20 inch alloy wheels, which feature a special design, with thin spokes. Behind the, the large disc brakes with red painted callipers are visible. The side profile is reminiscent of the 2007 generation Civic, but now, the redesigned version has an impressive aerodynamic body kit. The wheel arches are embossed (the front ones have integrated vents) and seem sculpted. The side skirts are low and profiled and also feature small air intakes and, like the front lip and rear diffuser, are painted black. At the rear, a huge double wing has integrated tail lights, which gives it a very threatening pose, especially when the lamps are lit. The rear bumper houses an immense air diffuser, with black and red elements and a quad exhaust system, with two tailpipes in tandem on each side and a red stop light in the centre.

In terms of power, the expected output should revolve around the figure of 276-280 bhp, although that might change until next year, as Honda has big plans in making the new Honda Civic Type R the fastest front wheel drive car to lap the famous Nurburgring circuit. A novel concept, the “+R” button will be making its debut on this car. What does that mean? Well, when pressed, it will act just like the Race mode does on a Ferrari: steering will become sharper, the engine will become more responsive and it will enter a performance oriented setting and the springs will stiffen. Sounds good?

For the all new Honda Civic Type R, Honda has let aside conventionalism and stepped on new grounds. The 2007 Civic generation, with its radical design, was the response to a continuously aging clientele of the brand. So, in order to avoid becoming labelled as a car manufacturer that has forgotten the younger generation, Honda revised its priorities and let the designers loose. The result? The best looking Honda Civic Type R we’ve ever laid our eyes on. And the best thing is that you won’t even have to tune it anymore, as the radically aggressive body kit will take care of properly expressing your personality. The only choice remaining would be which colour to coat it with…

The following statement comes straight from Honda and says that the new Honda Civic Type R will feature “unmatched performance compared to all previous Type R cars, including Civic, Integra, Accord and NSX”. Please read the last car’s name. Now re-read the sentence and read the last car’s name. Finished? The legendary Honda NSX was a vehicle that could stand its ground when faced even with Ferraris, so the automaker’s declaration must have some serious backing, if it invokes one of its most iconic models and says that the latest Honda Civic Type R will be able to beat it in terms of performance. Also, it will get a manual transmission mated to a 2.0 litre turbocharged petrol engine, with the redline coming up at 7.000rpm.

Considering that a. It’s a Honda and b. It’s a brand new model, little concern should be given to such matters. But if we analyze the cold facts – the i-VTEC new generation engine with Earth Dream Technology that promises to improve the running life of the engine block, to improve fuel efficiency and to lower emissions, the four-stage adaptive damper system which automatically changes the stiffness of the suspension according to the driving style and the road conditions and the improved drivetrain, even a critical mind will have to agree that the technology employed for the vehicle is bound to be trustworthy and thus, pose little to no problems in day to day situations – or for that matter, even on a track.

No price point has yet been set by Honda officials and the manufacturer’s website only offers a brief insight into the new model, without giving specific details. However, the Honda Civic Type R will be compliant with the strict Euro 6 regulations, which means that you will pay a small amount of road tax for it, even if it’s a performance oriented vehicle. The carbon dioxide emissions are bound to be at a low level, and the mileage should be better than the 2007 generation Type R, which was rated at 31 mpg, combined cycle.

The boot space is expected to be roughly the same as the last generation’s (at 485 litres – a respectable figure, for its class), while the interior will have the same arrangement, perhaps with improved ergonomics. Even though it had a sloping profile, the last Honda Civic Type R offered decent legroom for the rear passengers, and we expect the latest iteration of the model to do the same, if not better.