A supercar might not be the first thing Spain in known for, but the GTA Spano demolishes the typical representations of the football-bullfighting-sunny-beaches country. Why? Because it can! Probably driven by the same pride that lead Sweden to create Koenigsegg or Denmark to give birth to Zenvo, the Spanish masterminds behind the Spania GTA Technomotive have decided to build a vehicle that would grant them access to the world of the big boys – and they did. How does 925 horsepower sound?

Although it bears the same name as its previous iteration, unveiled in 2008 in a concept state and 2010 as production ready, the company representatives claim that the new one is a different beast altogether. Bringing forth innovative technology, such as the use of graphene in the construction of the chassis and bodywork, the company proclaims it to be a driving force for the performance automotive industry.

Design wise, the car manages to steer clear of the rest of the supercar crop, its most distinguishing feature being the way the body wraps around the doors, which is not only an aesthetic touch, but also fulfills a functional role, as the ridges and air canals divert cold air around the cabin and into the air intakes, cooling the engine and brakes. Opening the doors is done not by way of traditional handles, but through a hidden button situated behind the outer B-pillar logotype.

Marked by a convex bonnet and massive air intakes in the front bumper, the fascia is very aggressive, yet a little cluttered by too many details. Shaped by aerodynamics, the GTA Spano incorporates no less than 12 air intakes, from the front to the sides, helping it to achieve impressive performance, but losing a little at the elegance aspect, as it seems to be too ornate, a work more befitting of a tuner than an established manufacturer, but if you’re into it, that you will appreciate this style. 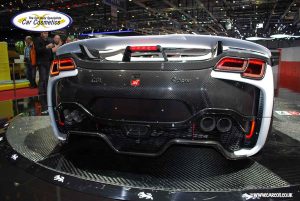 The mid mounted engine is displayed under a glass window, while an electronically controlled spoiler riser from the body to provide extra downforce when necessary or when summoned via the cabin mounted controls. A quartet of exhausts, accompanied by a very low air diffuser is embedded in the rear portion of the bumper – which, again – to the dismal of the fans, might seem a bit overloaded with details.

The body and chassis incorporate carbon fibre, graphene and titanium and the exterior mirror stalks are manufactured from aeronautical grade mechanized aluminium. Both the roof and the sun visors are made from electrochromatic glass, which, at the touch of a button, can change its opacity, allowing, as per preference, more or less light into the cabin. 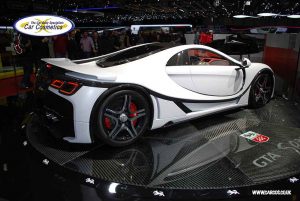 Wanting to be as much a luxury vehicles as a super sports car, the GTA Spano spared no expense when it came to the interior. A glass roof, with integrated sun visors into the windshield ensures that the amount of light coming in the cabin is user controllable. Sitting behind the leather wrapped, flat bottomed steering wheel, is a digital instrument cluster that can be configured following the client’s desires.

Carbon fibre and leather predominate, while a seven inch display is embedded in the central console. Used for entertainment as well as to project the images transmitted by the rear view camera, it fulfils multiple purposes. Bluetooth technology, as well as navigation and electrically adjustable seats come as standard. Atypical? Of course, but the good news is that it doesn’t make any compromises concerning performance. 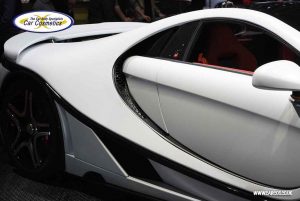 Being a newly unveiled car, no test drives have been performed, but we’ve got a few stats to keep you entertained. Build exclusively from a combination of carbon fibre, titanium and grapheme, the chassis is extremely stiff, presenting impressive torsional rigidity. With a total weight of 1,350 kgs (all liquids includes) it is one of the most lightweight vehicles on the supercar scene, with the monocoque weighs only 80 kgs.

Sitting behind the 19 inch (front) and 20 inch (rear) wheels, 380mm carbon-ceramic brakes fitted with AP Racing pistons are in charge of bringing the car to a halt, while ABS and traction control are features that further enhance the usability of the supercar. An adjustable twin trapezium suspension system is especially useful for track days, while an electronically controlled lift system helps the car hoist itself up to 8 cm from the normal riding height in order to safely navigate over speed bumps, the occasional pothole or the owner’s driveway. 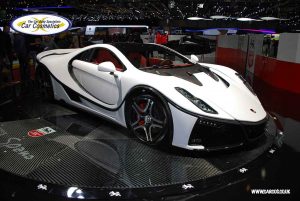 Unfortunately, no word on this one, as this is not a mass manufactured vehicle and the one who might shed some light on the matter are limited to 99. No instances of engine failures or even electrical issues have spawned on the internet, so this aspect of the car is questionable. Leaving aside fuel economy figures, which are, to the potential buyer of such a machine, irrelevant, the drivetrain is built in-house. Thorough testing was involved, as a high performance machine is put under much more stress than an average vehicle, so in order to withstand elevated G forces and reach speeds in excess of 229.9 miles per hour, the GTA Spano’s construction must be close to perfect, as it is the case with any other sports car in this class. 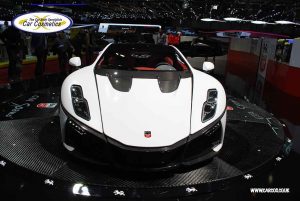 The first edition of the Spano was powered by a powerplant borrowed from the Dodge Viper, but modified to pump out 780 horsepower and had a tag of precisely 600,000 Euros. The latest model has a different, specially commissioned unit, with a displacement of 7.9 litres. Mounted mid ship, in longitudinal position, the twin turbocharged V10 is capable of producing 925 horsepower at 6,300 RPM. Transmitted to the rear wheels by a seven speed semi automatic gearbox developed by CIMA, the power is enough to propel the car from 0 to 62 mph in 2.9 seconds, while the top speed is an advertised 229.9 miles per hour.

Limited to only 99 examples, all spoken for already, the new GTA Spano will be sold for an undisclosed amount of money. Judging by the elevated performance figures compared to the previous version and the fact that there was tremendous work involved in creating it, the sticker price is bound to have increased. 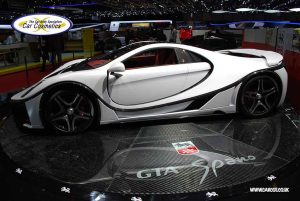 Not the first word to spring to mind when talking about a supercar, as noted by its creators, practicality is in fact, something that comes bundled with the new car. Aside from the generous boot measuring 150 litres, the car also possesses a central console storage area with cupholders and capable of refrigeration, a passenger mounted glovebox – also capable of refrigeration – and with integrated cupholders, storage compartments in the door bins and accommodation capabilities for two persons over six feet tall.

The roof, as mentioned, is panoramic and with variable opacity, while everything, from the materials to the colour of the upholstery is customizable by the client. Not bad, eh? Now all that remains is winning the lottery!