Built in order to mark the celebration of 40 years of Ferrari, the Ferrari F40 has become a legend in the automotive world. Race car drivers and automotive journalist alike have stated that this is the best car in the world, carrying over a legacy unadulterated by the addition of electronics and unnecessary comfort additions, making it one of the last representatives of the analogue supercars era. 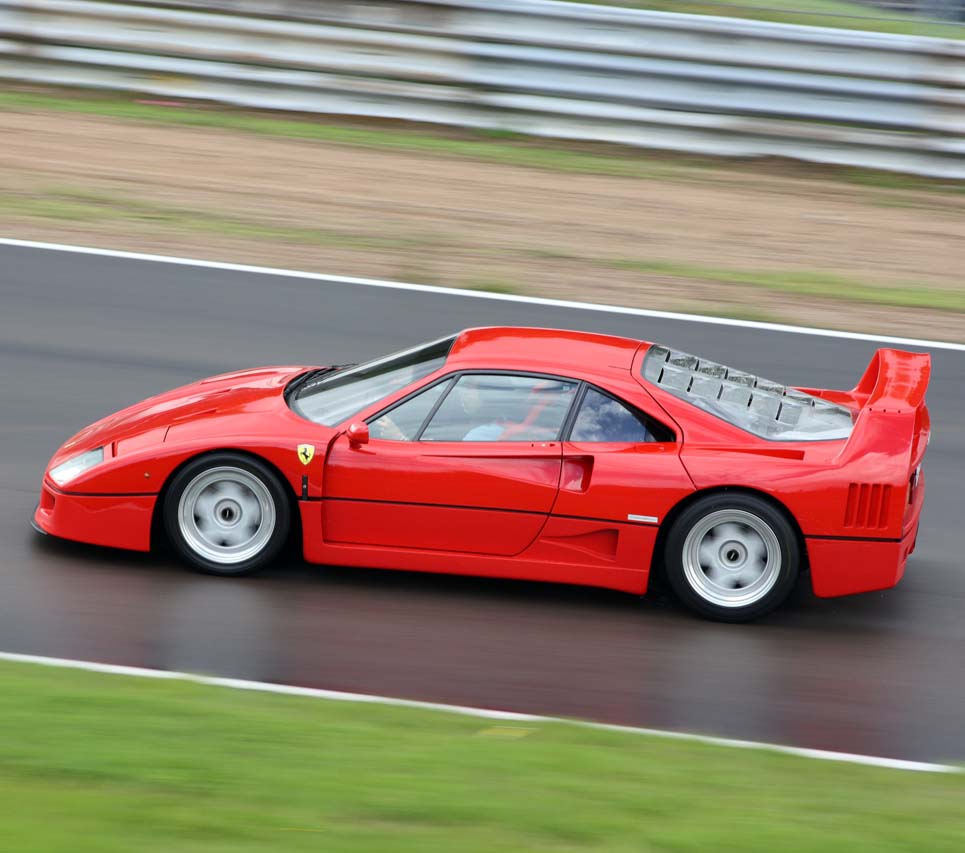 Designed by Pininfarina, it was based on the 288 Evoluzione’s chassis, a lot of five experimental prototypes whose main purpose was to tackle Group B’s races. However, as the rally category faded into oblivion due to numerous tragic happenings, the engineers at Ferrari, lead by Enzo himself, have decided to transform the racing efforts into something memorable. Thus, the Ferrari F40, the final example of a Ferrari commissioned by “il Commendatore” (Enzo’s nickname) was born.

An impressive 1,315 cars have been manufactured, from 1987 to 1992, as the brand faced unprecedented demand, going well beyond the initially planned lot of 400.

Although it was a street built car, the Ferrari F40 featured race car styling. The front was very low slung, with a dramatic nose dip. The bonnet features clean lines, with only two small NACA ducts protruding. The front lights feature pop-up headlights and turning signals encased in a thin Plexiglas shell. The front wings have air outlets to channel the air towards the rear of the vehicle, giving it a unique look. On the sides, two pair of NACA ducts of considerable dimensions suck cold air, the first pair feeding it to the engine and the second channelling the airflow towards the rear brakes. The massive integrated spoiler serves as both a styling element and a functional element, as it increases down force at high speeds. 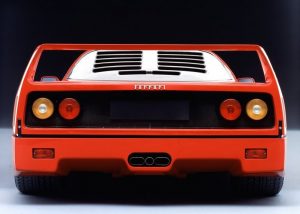 Despite the initial claims that the F40 was purely a street automobile, the racing heritage of Ferrari was visible through the intense thought given to the aerodynamics of the vehicle. The front section has a very low surface area, with minimal elements to create drag and the whole body is designed to bend the airflow. The 17 inch alloy wheels have a single bolt nut, while a two-stage suspension setting allows the car to rise and lower itself in order to avoid on-road obstacles that might interfere with its low ground clearance. 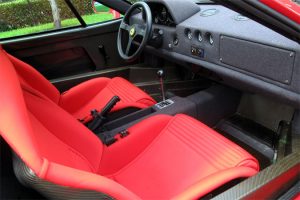 Although since the inception of the car more than 27 years have passed, its styling does not appear old or obsolete, as its shape appears to be almost timeless. Hailed by some as a beautiful piece of machinery – with regard to its exterior design – and called plain ugly by others, its character has not received negative critiques. The body of the car is built from composite materials – carbon fibre and Kevlar, as well as lightweight aluminium, in order to keep mass reduced to a minimum. The rear window covering the engine bay is made from Plexiglas and it’s open, in order to allow the heat from the engine to dissipate.

The interior is as Spartan as it can be, with the only amenity available being the air conditioning system. The build quality is horrendous, with cheap looking carbon tiles on the floors, massive gaps and traces of glue still visible. The windows are roll-ons and in order to close the door, you’re provided with only a string, but let’s be honest, if you’re buying an Ferrari F40, it’s not for its interior. All these measures were taken in order to save weight – effort that paid off, as the car weighs just 3,018 pounds, leading to impressive dynamic performance figures.

Open the door and you’re greeted by a massive door sill that makes entry quite tricky. Settle behind the wheel on the Nomex covered seats and strap on the racing harness. Put the key in the ignition. Push the start button (yes you read that right!) and rev the beast. Behind the rear seats sits a twin turbocharged 3 litre, longitudinally mounted V8 that delivers an impressive 471 horsepower at 7,000 rpm. The driving experience is knee-jerking, as the 62 miles per hour mark comes after 4.2 seconds and the speedometer needle won’t stop until it reaches 201 miles per hour. In fact, the Ferrari F40 became the first road legal production car to break through the 200 mile per hour barrier, by setting a record of 201mph, putting it ahead of every other street legal car manufactured until 1987. Due to the lack of insulation, the noise made by the engine and the IHI turbochargers is monstrous, forbidding any chance of a conversation inside the car at high speeds. The continuous bark of the engine is interrupted only by the whirls of the turbochargers and the specific waste gate noise. At the rear of the car, the triple exhaust serves a dual purpose – two spit out exhaust fumes and the third serves as an escape way for the turbocharger waste gate gasses.

Contrary to popular opinion, the Ferrari F40, despite the fact that it’s built in the 1980’s, does not pose any severe challenges in so far as reliability is concerned. In fact, it’s considered one of the easiest supercars to maintain. While the engine cover may be a bit hard to pull up and reveal the mechanical masterpiece hidden under it, the 3 litre engine is a trusty piece of equipment, with only small oil leaks known to happen from time to time.

Considering that the price of an Ferrari F40 may fluctuate between £200,000 and £800,000, depending on the mileage, condition and a host of other factors – including the owner, you might have to be prepared to further pump some money in order to keep the car in top-notch condition. For starters, an annual service will revolve around the figure of £800. Being a rear wheel drive car means that the tires, with a 335mm section will set you back a cool £1000 a pair, while replacing the clutch will cost £3,000. An original set of brakes costs £6,000. One of the last things to check, if you’re planning on buying an Ferrari F40, are the twin rubber fuel tanks located at the rear of the car, with a necessitate of changing every 10 years and, in case their time is up, brace yourself for a jolly £13,000 bill. But hey, it’s a supercar after all and if you can afford to buy it, you will surely afford to take care of it.

Designed to break records and be as nimble on the road as well as on the circuit, the Ferrari F40 is not the most practical thing in the world. Under the front bonnet, there is a small storage space, but that’s there mostly to hold a tire repair kit and not much else, so if you’re planning a road trip, this might not be the best option to consider. If lieu of anything else, you may try to use the passenger seat as storage space.