Devel Motors, the upstart from the United Arab Emirates, hasn’t been in the limelight in a while, so let’s shine the focus on the Devel Sixteen, which is promised to be powered by a massive 5000 horsepower V-16 engine. Before you begin watching the video, make sure you subscribe, like, and hit the bell icon to ensure that you continue to get such wild thrills. However, here we are, eight years after Devel revealed intentions to build a HyperCar with a 12.3-liter quad-turbocharged V-16, and the company’s promise of building a Bugatti-rivaling vehicle has yet to materialize.

One of the most intriguing hypercars on the market has to be the Devel Sixteen. Not because of its performance or even its beauty, but rather because of what others think of it. It’s also worth noting right away that, unlike the concept version of the supercar unveiled four years ago, the production version of the Devel Sixteen has undergone substantial exterior changes. This vehicle is a strong contender for the title of the world’s fastest automobile.

04:53 – A Performance never offered before

A little more than five years ago, the Devel Sixteen was unveiled, boasting an astounding 5,007 horsepower and a maximum speed of more than 320 miles per hour (515 kilometers per hour). But, year after year, we are assured that the vehicle would actually be delivered, and now we have some concrete evidence to support this claim. In addition, a prototype of the monster with a 12.3-liter V16 engine was recently seen taking its maiden test drive.

Those unfamiliar with this model should know that the 5,000-horsepower/3,757-pound-foot version will be limited to track use exclusively and will reach maximum speeds of 320 miles per hour, while the roadgoing version will be detuned to approximately 3,000 horses. A basic model with a V8 engine producing 1,500 horsepower has also been promised, and at this point, we’d be happy if even that version made it into production. Nonetheless, the fact that testing is now ongoing is encouraging. There’s good news: customer orders are now being accepted. Do subscribe to our channel if you haven’t, to keep receiving updates.

The updated and improved appearance of Devel Sixteen is a demonstration of high-quality automobile design. The vehicle seems to be especially long and stretched, which is accentuated by the way the body swoops around as if every panel is wrapped around another panel in a circular pattern.

Thanks to the short but sharp nose, the huge front spoiler that rests close to the ground, and the bizarre way the headlamps are packed, the front end stays appropriately ridiculous. Move around to the sides of the vehicle and you’ll see the sweeping wheel arches, the stretched body lines, and the multitude of intakes and air ducts that are scattered throughout the vehicle’s body. We guess that if you’re going to be transporting a V-16 engine beneath that body, you’ll need all of those intakes and cooling ducts as well.

The rear portion of the HyperCar is in keeping with the crazy motif that runs throughout the vehicle. Rather than having straight sides, the rear wheel arches feature fins on top of them, a novel approach to an otherwise traditional design technique that causes the least amount of disruption to the airflow that strikes the vehicle. It’s also noteworthy how this part concentrates on the two exhausts that seem to be more like jet turbines than anything else. Their size is such that you could probably put your head inside one of them and still have plenty of space left over for your other belongings.

Top-notch leather furnishings with metal ring inlays, as well as a mystery block with LED filling in the center console, were included in the prototype model. It was chosen to utilize leather with lozenge stitching for the floor even. The front panel had massive dials, giving the impression that you were not in a hypercar, but rather a spacecraft. In the actual form, however, the inside has been drastically altered in favor of simplicity.

The front panel has the appearance of a rectangular tablet, and the steering is represented by a small racing-style “steering wheel” with eight control buttons. There has been a major shift away from the Devel Sixteen’s exterior design in order to develop an interior design for the HyperCar, but Devel has chosen a more minimalist approach with the next version. Despite the fact that we are unsure if this is a good or bad development, we think that if the vehicle performs as well as it has been promised, the interior will play a less significant role in the overall driving and operating experience.

A Performance Never Offered Before

The Devel Sixteen, with all of its quirky design characteristics, will be remembered for the rest of the time for its promise to perform like no other automobile in the history of the planet. The engine of the vehicle is the first major reveal. The Devel Sixteen is powered by a 12.3-liter V-16 engine with quad-turbochargers, which somehow manages to fit in the vehicle. Such an engine is often seen in drag racers with a lot of performance modifications. If your brains haven’t been blown yet, be ready for a doozy of a discovery coming your way. Steve Morris Engines, an American business, created the power plant. According to business engineers, the test bench enabled them to achieve a maximum output of 5000 horsepower, which is the limit set by the dyno system.

This HyperCar from the United Arab Emirates turns out to be the world’s most charged vehicle. Engineers just couldn’t quantify it since they lacked the appropriate test bench to sustain such force. Such a motor should be capable of accelerating from zero to one hundred in less than 1.8 seconds. According to Devel, the Sixteen is capable of producing 5,007 horsepower and 3,519 pound-feet of torque thanks to its enormous engine. It goes without saying that the Sixteen is not a vehicle for the faint of heart.

Devel even predicts that once the Sixteen is fully operational and operating at peak performance, it will be capable of reaching maximum speeds of around 310 miles per hour (500 kilometers per hour). There is currently no information on the gearbox version that will be put in a sports vehicle. However, at such high speeds, a pre-selective box with two clutches is the best choice. High response rates will be impossible to accomplish with alternative gears. The vehicle features variable stiffness shock absorbers, as well as the ability to change ground clearance with three electrically controlled modes. Haven’t subscribed yet? The Devel might haunt you!

Devel vs the Competition

The Bugatti Chiron Super Sport 300+ clocked a maximum speed of 304.7 mph (490 kmph), breaking the Veyron 16.4 Super Sport’s previous record of 267.8 mph (430 kmph). Meanwhile, Devel claims a maximum speed of 348 mph (560 kmph) in the Sixteen, which is more than enough to beat Bugatti’s super Chiron’s record. Of course, there are other HyperCar competitors, like the Hennessey Venom F5 Coupe, in the world’s fastest HyperCar category. That vehicle now features a turbocharged 7.6-liter V8 engine that generates 1,600 horsepower and 1,300 pound-feet of torque. Because the Venom F5 is lighter than a Volkswagen Golf, Hennessey claims a maximum speed of 311 mph, which is still slower than the Devel Sixteen.

Everything that Devel has shown us about the Sixteen points to it being a HyperCar that will alter the game for the foreseeable future. Every detail of the story has been written and is only waiting to be printed. Devel’s only responsibility at this stage is to ensure that the Sixteen makes it into production. As soon as it reaches that stage, there are no more bets on who will emerge as the undisputed king of the hypercars. When the car goes on sale, it will come in three trim versions, each with increasing degrees of insaneness: a basic model V8 will cost about $1.6 million (1160000 pounds), a mid-level V16 with 3,000 horsepower will cost around $1.8 million (1305000 pounds), and the top-of-the-line V16 with 5,007 horsepower would cost around $2.2 million (1594600 pounds).

Interestingly, despite its unique technological features and potential dynamics, this beast from Dubai is less expensive than its competitors. The car’s unusual look, as well as its dynamic qualities, are extremely remarkable and promise a bright future for hypercars; nevertheless, it is too early to speculate until thorough testing has been conducted. Let’s see where Devel Sixteen goes from here. Fortunately for you, by just subscribing to our channel and staying tuned, you can keep up with every aspect of the Devel sixteen. So that’s all for today, fellas, and thank you for tuning in. Feel free to share your views in the comment area, and don’t forget to give the video a thumbs up if you like it. Devel Out.

If you liked this video review on the Devel Sixteen, please give it a Like and Subscribe if you want to see more! 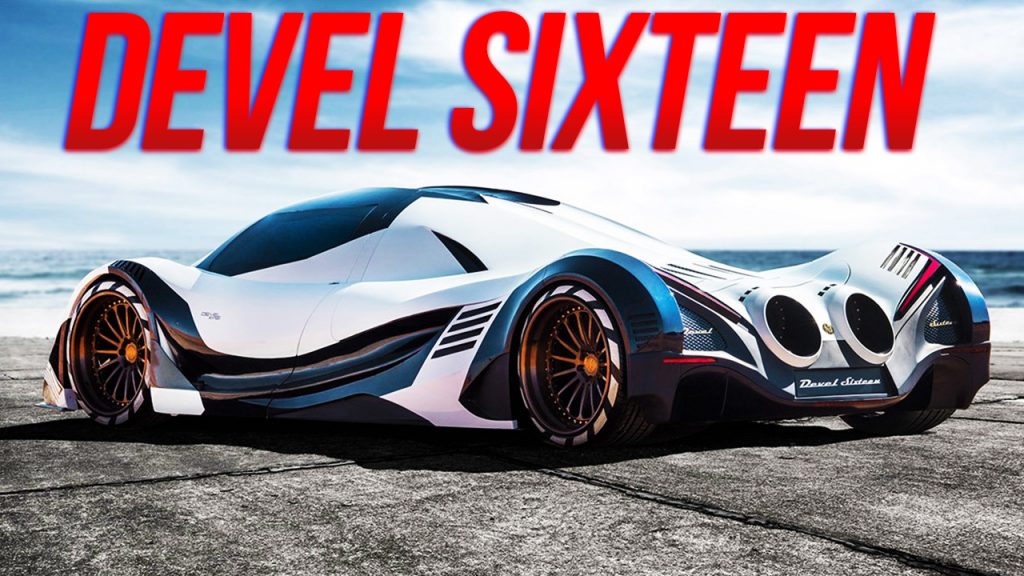