The massive Audi Q7 was among the last of the German maker’s models to receive its well deserved refresh, as the old generation wasn’t up to date with the latest design elements implemented to the rest of the range.

For starters, its classical, massive SUV footprint has transformed in to a massive wagon footprint, as the car underwent a redesign that makes it look like an A4 wagon with raised suspension kit. This element has brought it massive criticism from the fans, which were bewildered as to why the automaker has resorted to this decision, since the rest of the four by fours in the range have kept their overall proportions.

While we might never get a clear answer from Audi, the big change that occurred was that more than 41% of the car’s chassis and body feature aluminium instead of steel, resulting in a reduction in weight of no less than 325 kilograms.

The front of the vehicle stands out through its huge silver grille. Essentially the same as the one present on the Q3 or Q5 – but bigger, the angular “3D” grille is not there just for show, as behind it, active aerodynamic elements shut the pathway to the radiator when engine cooling is not required, thus resulting in lower drag. However, we’re told that this feature will be present on only some of the examples, presumably the top of the line ones – as implementing them on all levels would be too costly.

The headlamps have a double arrow LED pattern, which serves as day running lights and it offers the car an individualistic appearance once nightfall sets in. Lower still, a subtle a-la-TT slit connects the two massive air intakes from the front bumper. Underneath the body, air channels and plastic cladding make sure that the drivetrain components do not oppose as much wind resistance as the previous version did. 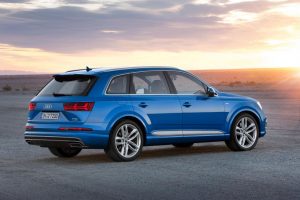 Moving on to the sides, the roofline appears to sit lower and the contoured shoulders, along with the straight character line that runs the length of the car make it appear as it is no longer a full size SUV, but an oversized wagon. On the other hand, the flared wheel arches do showcase the large 19 inch alloy wheels, making it look imposing.

The rear has a pair of taillights that mirror the design of the lamps in the front, as the same double arrow design is employed here. A large roof spoiler, together with a sleek air diffuser which now incorporates a pair of flat exhaust tips rounds off the image of Audi’s new big toy. 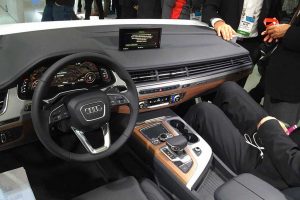 As opposed to the outside, the interior of the Audi Q7 seems to come from a different world. A hyper minimalistic design, worthy of being showcased on a supercar rather than in a mundane SUV is replacing the more common dashboard design of old. For starters, Audi’s Virtual Cockpit is powered by BlackBerry’s QNX software (also used by the new generation Fords), first to debut in the TT. This replaces the traditional dials behind the wheel with a massive display, which serves both as navigation and is able to relay in real time crucial information to the driver at a glance. Internet connectivity is present by default.

A second, standalone screen is embedded in the dashboard, which may also be used for navigation or entertainment purposes. The multifunctional steering wheel mirrors in its centre, the design of the front grille, with the Audi logo embedded in the leather. As part of the new interior arrangement, the dashboard, as well as the central console feature only essential dials and knobs, the rest of the functions becoming controllable via the intelligent software. 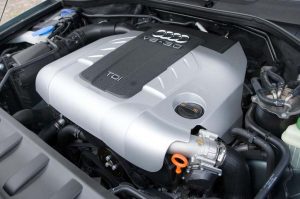 Present in Detroit only as a showcase model, the Audi Q7 was not allowed to leave the boot, so we don’t have a precise idea about the handling of the new model. Although it still weighs about two tons, its lowered weight should make it more nimble in traffic. The show model had an air suspension fitted to it, which we don’t know if it will be available only to select models or the hole lot of Q7’s, but it can be adjusted to suit your needs – it permits lowering the car with 30mm or jacking it up to 60mm. So yeah, you can mount your neighbour’s coupe now!

In addition to the seven selectable driving modes (dynamic, allroad, individual, efficiency, comfort, auto and lift/offroad), the new model will also benefit from a technology that permits the rear wheels to steer to as much as five degrees in unison with the ones in the front, in order to improve overall handling. To top it off, the new Audi Q7 uses the MLB platform, which will be used by the upcoming Bentley Bentayga and Porsche Cayenne. 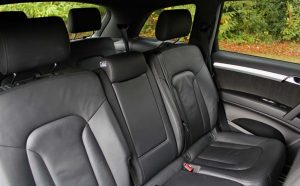 The old Audi Q7 has maintained a reputation of being quite a reliable vehicle, with only uneven tire wear as the most complained about issue. A recall about the failure of the electrical motor operating the optional powered bootlid was the largest of problems, but all in all, it was a solid car. The current version seeks to up the ante, as the German engineers have been hard at work to improve Audi’s image as a premium car manufacturer. An unpleasant fact with which the company was faced was that the old version only scored four stars out of five at the Euro NCAP crash tests, aspect that the latest iteration seeks to mend. 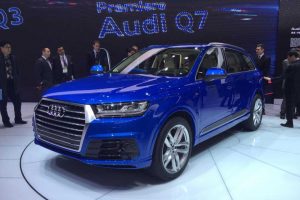 Presumably towards the end of the second quarter of 2015, a second engine will be made available, albeit a less powerful one – the 215 horsepower V6. All power plants will be Euro6 compliant, as the auto giant seeks to reduce its footprint on the environment. In late 2015, a plug-in hybrid, dubbed the Audi Q7 e-tron, will arrive in the UK. Featuring a combination of a 3.0 litre V6 (256bhp) and an electric motor, the end result will be an output of 370 horsepower and 516 lb ft of torque.

Additional info reveals that the expected fuel economy for the model will be 166 mpg, and final emissions will top off at 50g/km, while the 0 to 62 sprint will take only 6.1 seconds. Top speed will be 139 miles per hour but don’t expect to get that fuel economy figure if you’re keen on testing the limits of the car.

No prices have been revealed, but we can expect the new model to have roughly the same price tag as the former generation, perhaps a smidge extra. As a reminder, the former Q7’s cost started from £43,895 up to £65,220. 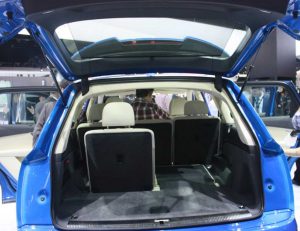 The 2016 Audi Q7 is smaller in size compared to the model it replaces: it’s 37mm shorter, 15mm narrower and it sits 50mm lower, with the wheelbase being reduced by 10mm. However, the magical Audi fairy made the reduction in size irrelevant as the interior space actually grew, providing 21mm of extra leg room for the passengers on the second row of seats.

There are three rows of seats in the car, but we would only recommend using the third only for children of in extreme cases for adults, but not for extended periods of time, as things will get uncomfortable. Boot space is impressive, starting with 290 litres with all seats in place, to 890 litres with the third row folded. A maximum of 2,075 litres sit at your disposal if you fold the middle row as well, enabling you to transport small boats with ease.