Audi’s compact SUV has been well received by the audience, selling in fairly large numbers, which lead the manufacturer to provide it with a well deserved refresh for 2015.

Sharing the same design language with the rest of the Ingolstadt range, the new Audi Q3 is more refined than before, both in exterior appearance and cabin space and is fitted with more efficient engines.

In terms of looks, the fascia is immediately noticeable, as the large grille, spanning more than it has before, sports a more angular contour. Going back to the new TT, this feature has been transplanted to the entire range of vehicles belonging to Audi, in order to consolidate its image in the eyes of the consumer. Framed by a chrome margin, it will undoubtedly stand out.

Flanking it, two horizontally positioned headlamps also incorporate the already traditional LED day running light arranged in a characteristic pattern, specific to each model. In our case, they are laid out in an angular manner, mirroring other elements, such as the prominent central lip of the front bumper. Since we’re in this area, the bumper is characterized by large air intakes, but, to our dismay, they are covered by black plastic covers and aren’t functional.

Unlike the larger Audi Q7 which now looks like a wagon on stilts, the Q3 has retained its mini-SUV identity. Its sides are very athletic, as the roofline falls towards the rear, the effect reinforced by the progressively thinning window line. Aluminum elements, such as the roof rails and the contour of the glass surface give it a livelier image, also aiding the visual impact. Coming standard with 17 inch Y spoke alloy wheels, the Audi Q3 has a muscular appearance, subtly suggested by the flared wheel arches. As a pleasant addition, the vehicle also comes with plastic body protection but unlike some other rivals, it matches the paint of the vehicle. 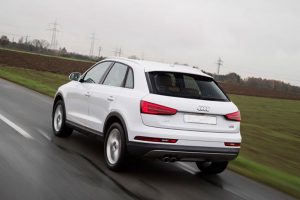 Moving on to the rear, a roof spoiler adorns its upper side. The headlamps are somewhat similar to those of the last generation and to the ones fitted on the Audi Q5. Lower still, the exhaust tips are now integrated in the rear spoiler instead of being hidden.

Should you want more, there’s always the RS Q3 version, a more potent variation of the compact SUV. With a tweaked suspension system, more nimble acceleration figures (4.8seconds to 62 from a standstill) and a top speed limited to 155 miles per hours, the RS is nothing to sneer at. Add to that the improved looks and select a more eye-popping paintjob and you’ll be bound to be noticed on the road. However, prepare to pay as much as £45,495 as a starting price. 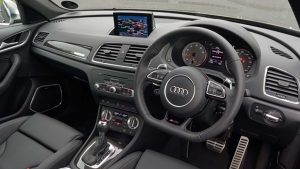 Inside, the Audi Q3 looks a lot like the old one, mostly because the 2015 version is a facelift and not an entirely new generation, as was with the TT. Soft touch materials cover the dashboard, centre console and door faces. A nifty multimedia screen pops up from the dash to display critical info and it can be accessed via steering wheel controls, but it’s still powered by MMI, lagging behind competitors.

The trim choice has improved and you can have various inlays, ranging from aluminum and piano black up to walnut brown veneer. If you still want more, you can always rely on Audi Exclusive, the Ingolstadt manufacturer’s bespoke service, to select a wide range of exterior and interior colours, personalized upholstery, custom inlays and so on. Just make sure your wallet is thick enough! 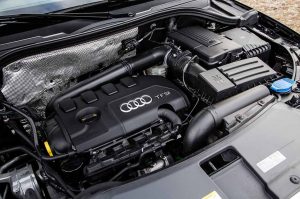 Although marketed as an SUV, we highly doubt that the Audi Q3 will see more than a few muddy country roads. After all, the low ground clearance and its other limited off-road capabilities restrict it to (mainly) tarmac.

Inside, the driving position is quite elevated, evading the small SUV image and the lumbar support offered by the seats is top notch. Insofar as the driving experience goes, the compact Audi isn’t the most involving of the vehicles we’ve driven. Put it alongside an Range Rover Evoque and it will hide in shame. However, its best point remains comfort, as the suspension does a splendid job of filtering road imperfections and courtesy of Audi, you have the option of selecting driving modes: comfort, auto, dynamic and efficiency, which, as you might have guessed refer to the prior mentioned categories. The “cushiony” feel of the drivetrain affects in-corner behavior, as the little Audi Q3 does exhibit some symptoms of body roll, but as long as you don’t push it to the max in hairpins, it will do its job quite well. 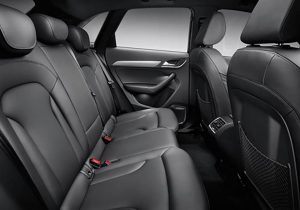 The Audi Q3’s popularity has stemmed from its unique range of offering and one of them is its known reliability. With the new model, Audi has improved both the electrical side and the mechanical part of the car, so issues will most likely be sporadic. In addition, you’ll be happy to hear that each new Audi will receive a 3 year Audi warranty, with unlimited mileage for the first 2 years of ownership and full mechanical and electrical warranty bound to cover you for up to 60,000 miles in the 3rd year. Paint also receives a 3 year warranty, as well as 12 years protection against corrosion and UK roadside assistance for 3 years.

The base SE comes with a price tag of £25,340. For the money, you’ll get a 150bhp, 1.4 litre TFSI engine, coupled to a 6 speed manual gearbox, which has on-demand cylinder deactivation technology, helping you save a bit of fuel when you’re not driving it actively. Fuel economy figures revolve around the figure of 51.4 mpg mixed cycle. The best mileage comes from the 2.0 litre TDI, 150bhp powerplant, which is able to return 61.4mpg. 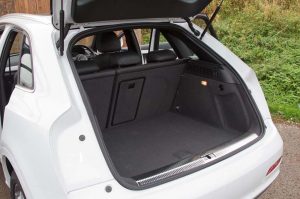 On par with the BMW X1, the Audi Q3 has precisely 420 litres allocated to the boot, with seats up. Folding them clears up to 1,325 litres, which should be sufficient for carrying bags and the like, but it won’t be a champion hauler; for something bigger, just look at the Q5 of Q7, if you fancy Audi.

Interior space is plentiful for adults. In the front, the passenger and driver have an excellent position, and the seats allow for an elevated driving position. In the back seat, you won’t feel cramped in the least, as the front seats have recessed backs and there is plenty of head and legroom. However, we wouldn’t advise fitting adults there for a long time, as the transmission tunnel is elevated and the middle seat is a bit narrow, but it should suffice for occasional use.

If you want to know more about the Audi Q3, click here.