The most exclusive product created by the revered British marque, the Aston Martin One-77, has been described by CEO Ulrich Bez as “living art”.

The concept underlying the design as well as the production process itself was that of creating the most extreme Aston Martin thus far, whilst still keeping the trademark DNA of the brand. Visible thorough every surface of the vehicle, the current design language employed by the current range of luxury sports cars has been transplanted into the One-77, but machined into a more extreme shape.

The very first sketches indicated a return to the form, an organic flow of aggressive, yet supple lines that would have made it probably one of the most beautiful cars ever created. Although it did not venture too much off, the final product it does look softer and less dynamic than the first renderings indicated; the initial savage nature of the project has been toned down, perhaps in order to keep a more conservative approach to the design, in line with what is happening at Aston Martin – not a major flaw, but it would have stood out even more.

The front end incorporated the trademark grille, taking up most of the surface area, and is flanked by two vertical air intakes that bite into the headlamps. The lights themselves represent a novel element, as they are different from what the brand produces at the moment and incorporate bi-xenon lamps and LED sidelights. Carbon fiber elements are found just underneath the front bumper, in the form of air splitters. The bonnet has two sculpted air channels, leading up to air outlets that expel hot air from the engine. 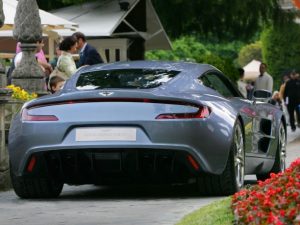 The front wings embrace the wide track wheels, continuing their way to the sides of the automobile where a distinctive, wide air expeller incorporating the turning lights extends into the lines of the door. The side skirts are not profiled, as found in other high performance cars, but rather moulded to the lines of the chassis, creating a sense of smoothness like no other. The mirrors themselves are attached to a thin proboscis, designed to split the air. Sitting lower than any Aston made thus far, the window line is distinctive to this model and together with the wide shoulders and the expansive track of the rear axle lends the super car a leaned-back appearance.

A single, uninterrupted line propagates from the headlamps to the rear of the Aston Martin One-77, where it emphasizes the long LED rear lights. Brand new, they represent a new direction for the design of Aston Martin and were given painstaking attention throughout their process of creation, in order to balance the looks of the car. The quadruple exhaust is incorporated into the sharp looking air diffuser, giving the impression, at first glance that it’s non-existent.

The Aston Martin One-77 is designed as a two door, two seat coupe.

In the interior, a pair of handcrafted, lightweight leather covered seats which feature position memory greet the driver and the passenger. Milled from a single block of aluminium, the center piece of the console houses the climate and audio controls, as well as the navigation screen. Carbon fibre inserts decorate the dashboard, while the thick, leather clad steering wheel stays true to the Aston Martin spirit. 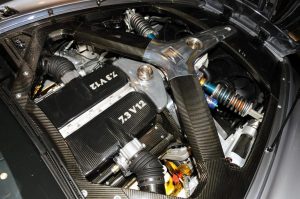 The drive train features front and rear double wishbone independent suspension, with roll bars and electronically adjustable ride height. A six speed, single clutch automatic gearbox is mounted in the rear, together with a limited-slip differential.

Powering the Aston Martin One-77 is a 7.3 litre V12, sitting just behind the front axle, being mid mounted, for a precise weight distribution and a low center of gravity. The engine powers the rear wheels, delivering up to 750bhp and being capable of an impressive maximum speed of 220 miles per hour. The 0 to 62mph sprint takes just 3.7 seconds, making it the fastest car ever produced by the British marque. As expected, the ride is sublime, as active aerodynamics keeping the car’s balance in tight corners. At high speeds, you’re pinned to the seat – after all, the 750 horsepower engine is one of the most powerful naturally aspirated power plants on the planet!

As of now, there is no account of any breakdowns or faulty equipment, but in case something should happen, Aston’s concierge service should take care of the issue and usually, things are kept quiet. However, taking into consideration that the Aston Martin One-77 project has been a high-priority objective for the brand, tolerances in this regard should be close to zero, as extreme performance requires endurance and reliability testing in the harshest conditions imaginable. Should any opportunity arise in finding out more, we will update the review as soon as possible.

Fabricated in a limited series of only 77 examples, the Aston Martin One-77 is one of the world’s rarest supercars. The price for a standard car, without any extra options is £1.2 million. The buyer is involved, from start to finish into the build of the car and can specify everything it wants, including the colours, textures, materials used, as well as how much the controls weigh! No other information is known about any potential running cost, including fuel consumption figures, but if you can afford the vehicle, a tank fill will seem insignificant. 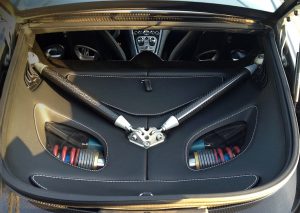 As the car is designed to be an example of craftsmanship and precision engineering, the boot space has been placed on a second  place – or rather on the last place, as there is little to no storage available. The small rear hatch will hold, at best, a handbag and, in order to accommodate larger objects, the passenger seat will have to be sacrificed.

Want to know more about the Aston Martin One-77? Here’s a link the Official Website