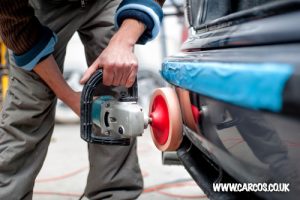 Car Polish is generally confused with T-Cut Compounds. The reason is pretty simple and straightforward though. While car wax and car polish differ from each other in their very basics, car polish and T-Cut are somewhat similar in nature, since both of them possess abrasive traits. Car Polish and T-Cut are terms that you would come across very frequently when it comes to car detailing. The frequency with which these terms get thrown around is also somewhat responsible for the confusion in understanding what each of them does and how it is different from the other somewhat resembling terms. As a consequence, the term car polish may be used interchangeably with T-Cut without the awareness of what it really means and stands for. Harping on the same point, it is important to note that each of these terms is distinct from the other and comprehension of this distinctiveness can make a big difference. If you are well acquainted with what each of these terms is, in this context car polish and T-Cut, then keeping your car in the best of shape would become a piece of cake for you. Not only will keeping your car up to date become easy for you, but you would also be able to get the best out of your money and time.

What Is A Car Polish?

Polishes are those substances which contain mildly abrasive particles in them. Bluntly put, polishes contain solvent cleaners in them. The solvents which these car polishes comprise of can vary in their type and degree of intensity. You could either get hold of a polish which is made of some natural solvent, very mild in nature or a polish comprising of some petroleum solvents which are very strong and harsh. Depending upon the type of solvent deployed in the polish, the degree of abrasiveness also varies.

What Does A Polish Do?

A Polish is used to give a glossy finish to your paintwork. It is usually followed by waxing and thus we can say that in a sense, it prepares your paintwork for waxing. The old wax layers accumulated on the paint’s surface are removed by virtue of polish. Similarly, any blemishes, swirls and residue of old paint sealants are also effectively removed. Removal of these layers of dull paint, blemishes and other such substances of the like kind ensures that your paintwork is restored with its former gloss and will look just like new or perhaps even better.

How to Apply It?

There are three basic ways in which car polishes can be applied.

A car polish can bluntly be defined as a cleaner which gives a glossing finish. It doesn’t contain the abrasive cut of a compound and thus will not remove your paint, just bestow it with a mirror like reflection. Polishes are not sealants or protectants essentially but some polishes may come with sealants or waxy properties mixed in them.

Now that we are clear on what a polish is and what it does, let us now understand the definition and functioning of a T-Cut.

A T-Cut is somewhat similar to a car polish in the way it works but it is much more abrasive in the degree of its intensity. It is basically used to restore the condition of your car’s paintwork to look just like new. If the paintwork has grown a few years old, then it would be best to give it a little treatment of T-Cut. In compounds or T Cuts, the amount of cleaning agents present is usually comparatively higher. Also, the abrasive grit deployed in its makeup is larger. Commonly, Silica is an essential component of these compounds.

What Does a T-Cut Polish Do?

A T- Cut Polish is basically used to smooth down the surface of your paintwork since it removes all sorts of scratches and blemishes. Over the time, grime and dirt get accumulated on the paint’s surface and would mar its original gloss and brightness. A T-Cut effectively cuts through this accumulated dirt to restore the paint’s gloss. Any scuffs, scratches, stains or tar spots on the surface of your paintwork can be taken care of through a T- Cut or compound.

How to Apply It?

While applying T- Cut onto the paint work, make sure that it stays away from any plastic or windows. Even if you do manage to get some of it on the windows or plastic, try to remove it as soon as possible before it dries off otherwise you would be left with stubborn decolored stains which will refuse to budge. Try to avoid using T-Cut in hot weather. Also, work in smaller areas since it would yield the best results.

It is basically used to treat excessively damaged, dull paint. Other minor issues can be taken care of by polishing. However, compounding or using T-Cut is going one step beyond polishing. This is because T-Cut is a much more aggressive material which is used to revitalize excessively old and dull paint. It strips off the first layer of oxidized paint which is dead to the touch due to the gradual accumulation and aggregation of environmental excretions and paint residue. However, T- Cut should be the last resort. Always try to use a comparatively mild cleaner or a polish primarily. If it doesn’t work for you then T-cut ought to be your next option. 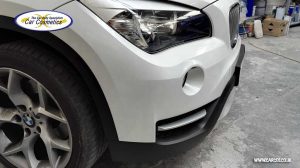 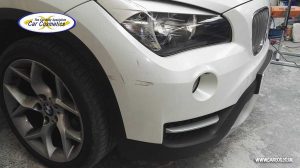 We hope this makes everything much clearer with the difference between car polish and t-cut and shows you how each product you use as it’s own special usages. If you’d like a quote to remove some light scratches or would like a full machine buff and polish, click this link for a free quote.