How To Open A Car Bonnet

In this article, we’ll be going over how to open a car bonnet on any vehicle. It’s a relatively straight forward process, but is important to know as every vehicle can be slightly different in terms of location of the lever or button. When you’re finished with this guide, you’ll be able to open your vehicle’s bonnet and secure it in the open position without any problems. Whether you’ve never opened the bonnet, your bonnet just won’t open, or you recently purchased a new car and need to figure out how to open a car bonnet, we’ll walk you through all of the steps. 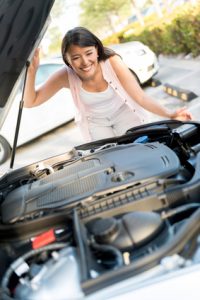 First of all, it’s important that your vehicle is turned off and cool to the touch. Engine compartment components get extremely hot after driving around for even a short period of time, so we recommend you wait an hour or two after turning your vehicle off before you decide to open the hood up for your own safety. Assuming the vehicle is off (with the keys removed from the ignition) and cool to the touch, you may proceed. Make sure your vehicle is in gear (manual transmissions) or in park (automatic transmissions). Also make sure that your handbrake is engaged. These aren’t necessarily things specific to opening your car bonnet but are standard practices any time you diagnose or operate on a vehicle in general.

Next on how to open a car bonnet,

you’ll want to look around the driver’s side of the vehicle. Typically there will be a knob, button, latch or lever located on the driver’s door or near the floor of the vehicle. Look around for any symbols that represent a car with the bonnet opened. Occasionally, the latch will be located to the right of the steering wheel underneath your dash board. Pulling on the latch will put tension on the cable connected to your bonnet’s locking mechanism, disengaging the lock. You’ll hear and/or feel a heavy pop from the front of your car when the lock is disengaged; this is completely normal and expected.

Once you’ve pulled the latch and your bonnet is no longer locked down to the frame of your vehicle, you should exit the vehicle and walk around to the front. You’ll notice there is a gap between the hood and the front bumper indicating that the lock is no longer active and you may proceed to lifting the bonnet. You’ll want to stick your hand in the front center of the vehicle between the gap to find the last disengagement latch. It will be a spring loaded piece of metal that you simply need to push upwards or move to the left or right, depending on the vehicle (it’s very safe don’t worry). Feel around inside until you’ve located it, then gently manipulate it until your bonnet will easily lift with minimal resistance. Your bonnet comes with struts that help to lift and support the hood during the process.

Once you’ve figured out how to open a car bonnet on your make of vehicle, it’s important to prop it up to ensure that if your support struts fail, it won’t come crashing down on your head while working on the car. There will sometimes be a rod or lever either in the front or by one of the sides of the engine bay. By simply pulling upwards on it, it will release from it’s position and allow you to move it up towards the hood. There will be a small hole or gap on the underside of your bonnet for this lever to be inserted to, securing it in place.

At this point, your bonnet is open and your vehicle is ready for service or maintenance. When you’ve finished what you need to do under the hood, simply remove the security lever from the gap, lower it back to it’s resting place (it should snap in to position) and pull on the hood back down to about a few inches from the resting point and let go. This should have enough force to lock the bonnet back in the closed position. Double check it’s all the way in place by trying to lift it back up, if it doesn’t move you’ve secured it.

Below you’ll find more guidelines on how to open a car bonnet of different manufactures:

How to open Mini Bonnet

Latch to release bonnet is in passenger foot well – Bonnet catch is slightly to the right at the front.
Video to Follow

How to open Mercedes Bonnet

Latch to release bonnet is in driver’s foot well – Bonnet catch is in the center usually within the grill at the front.
Video to Follow

How to open Fiesta Bonnet

Latch to release bonnet is in driver’s foot well – Bonnet catch is in the middle above badge at the front.
Video to Follow

If you have any confusion about the location or process, refer to your owner’s manual for your specific vehicle or ask us below on how to open a car bonnet. We’ll be happy to help.