If someone were to ask you what is the bestselling two door sports car in the world, what would you answer? A Lotus? A Ferrari? A Lamborghini maybe? 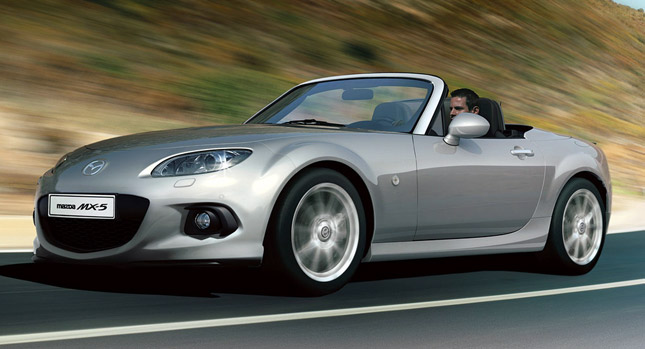 Well, you can forget about all of the above, because the absolute champion in terms of sales, measured on a global scale, is the legendary Mazda MX-5 – or Miata, if you prefer. What’s more, in 2011, the Mazda MX-5 entered the Guinness Book of Records with 900,000 units sold, fact proudly displayed on the manufacturer’s website, which reinforces the vehicle’s status as the best bang for the buck you could ever get in the affordable sports car sector. Nimble, low and pretty good looking, the little roadster has crept its way into the hearts of countless motoring enthusiasts worldwide.

Inspired by the Japanese concept of “Jinba Ittai” or ‘horse and rider as one’, the car is styled according to precise principles, in order to insure the perfect connection between the mechanised soul of the car and the driver sitting behind the wheel.

The front is dominated by the long bonnet, which features an elongated U-shaped ridge, for additional sportiness. The sleek headlamps keep a horizontal position (something that’s becoming rare these days) and despite the fact that Mazda calls it aggressive styling, the fascia doesn’t look at all threatening, especially with the smiley-face front bumper. Moreover, the fog lights and the fender flares make it look as if it has puffed cheeks, so, in the most fortunate case, we would call it sporty, but not aggressive. Moving on to the side view, the wheel arches look strikingly similar to the RX-8 model. Nothing disrupts the clean profile, as no straight lines collide with the smooth curves of the car. The rear end features a reverse/stop light on top of the boot lid, two horizontally mounted rear lights (continuing the same theme from the front) and beneath the clean bumper, two sport exhausts, one on either side, complete the styling.

The Mazda MX-5 is available both as a soft top or a hardtop Roadster Coupe, but, in case you’re feeling frisky, there’s also the limited edition 126 bhp Sport Venture, with a 1.8 litre engine and 50:50 weight distribution.

The basic version is the Mazda MX-5 SE soft top and comes in at £18,495. It offers a 1.8 litre petrol engine developing 126 bhp and has a combined mileage of 38.9 mpg. For whatever reason, on the Mazda UK website, the only available colour for the car is red, and all others come with an extra £520 price tag.

The hardtop roadster coupe comes in 5 different configurations, the basic one being the SE and the most expensive one, the MX-5 Power Shift, which starts at £23,695, but offers a more potent 2.0 litre petrol engine.

The third generation Mazda MX-5 was launched in 2005, and the 2014 model was built on the same platform, however heavily modified and upgraded. September 2014 marked the unveiling of the fourth generation car, a complete redesign of the vehicle, true to the KODO design language employed on the rest of the range (think Mazda 3) and built on the highly acclaimed SkyActiv platform.

Returning to the current generation, we will focus on the interior as the exterior was detailed beforehand. True to the spirit of the car, the cabin remained very simple. The steering wheel features only the most basic controls, while everything is meant to be functional and not flashy. The space is a bit limited, but then so are the car’s dimensions. A good news would be that the steering column is height adjustable, while the seats can be pushed far back, making room for a tall driver and a passenger.

Although not very quick, the Mazda MX-5 does its job with pride and conveys a sense of well being unmatched by anything in this class. The steering is extremely precise and light, there is barely any body roll when cornering and the brakes seem to have been calibrated by fifteen teams of engineers. The suspension does its job very well in filtering bumps and potholes and because of this and the comfortable interior it could be a well-rounded daily driver. On the downside, the automatic gearbox does not shine that bright, so we would advise choosing the manual. Due to insufficient isolation – or perhaps because the engineers were overzealous, it could get a bit noisy in the cabin, especially at high speeds.

Considering that the current generation has been tested and re-tested in all these years, you should expect to get a decent ride for your money. In case you find yourself out of warranty and need some work done to your car, do not despair, for spare parts are not expensive and can be found at any dealership or authorized body shop. Since the 2008 facelift, there hasn’t been a Euro NCAP test performed on the Mazda MX-5, but in 2002 it received 4 out of 5 stars because the low profile of the car did not provide optimum protection for pedestrians. The current models offer airbags for driver and passengers and the higher tier versions get also lateral airbags.

As the Mazda MX-5 has only two seats, you can’t expect it to compete with the family car. Moreover, if you choose the hardtop version, the mechanism will eat even more of the already limited boot space – at 150 litres, it’s nothing to brag about. A few small bags will definitely fit in, but don’t expect something of considerable volume to fit in there. In the cabin, you get four cup holders, a glove box compartment and another storage area between the seats; not much but since it’s not a utility vehicle, we can forgive them.