With the introduction of the Jaguar F-Type Coupe, Jaguar has made a powerful statement within the premium sports car sector. Its stunning design acts as a refreshing sign that the manufacturer has made a strong comeback to the market: swooping lines, nicely contoured wheel arches, and an aggressive fascia that holds true to the brand’s design.

For quite some time, Jaguar has focused on either four-door saloons or over-comfortable coupés. However, with the new Jaguar F-Type Coupe – which is a smaller, more driver-friendly car – Jaguar signals that their racing heritage has not faded. Manufacturers such as Porsche have gained a strong market share, which the new Coupe intends to attack. 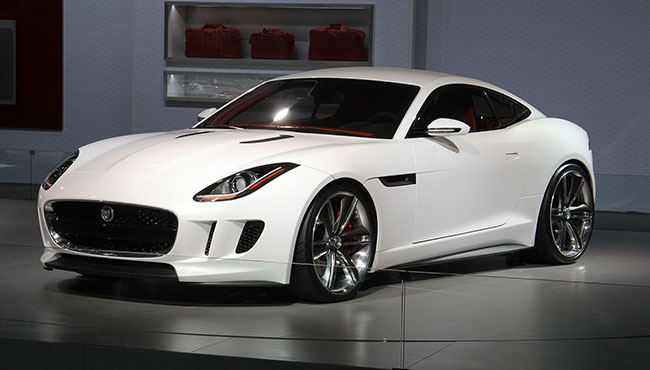 From a design perspective, the F-Type Coupe could be easily described as a beautiful automobile. Designer Ian Callum called it “the best car he has ever penned”; this alone speaks volumes. Its long bonnet is reminiscent of the E-Type, while its short rear end contributes to a very sporty appearance.

Whilst the car wants to be a competitor for Porsche’s Cayman and 911 models, the Jaguar F-Type Coupe is only a two-seater, which means that the interior space suffers from this configuration. On the other hand, the large doors allow for easy access, whilst there is still plenty of leg and headroom in the cockpit. The boot does not offer that much storage space – perhaps a set of golf clubs or an occasional bag – but then, it is a sports car, not a saloon.

The cockpit itself is very well designed, with a big, clear instrument cluster and intuitive controls. As an extra, you may choose a glass top (at £1,250) – which emphasizes the spacious feeling and increases the amount of light that enters inside the vehicle. It even has rubberized gear-shifting paddles so that your fingers do not slip when you change gears, and the mood lighting, usually blue, switches automatically to red when in Dynamic Driving Mode! Quite a nice touch on behalf of Jaguar!

As for options, an automatic gearbox comes as standard on every Jaguar F-Type Coupe model. The front parking sensors do not, but are not a very expensive option, at £245; we personally recommend that you give it a thought, as the bonnet stretches forward a long way and it would be a shame for the car to get damaged in a tight parking manoeuvre. There is also satellite navigation, Bluetooth connectivity for your mobile, digital radio, dual-zone climate control and let us not forget the glass roof.

Benefitting from a distinctive design, the new Jaguar F-Type Coupe from Jaguar is one of the most powerful statements the British manufacturer has made in the automotive industry.

The body of the car breaks away from tradition – it is shorter and more compact. Gone are the days of over-comfortable GTs; now, a sleek, yet muscular figure, with pronounced shoulders and a nose that slopes at an aggressive angle has taken their place. A true Porsche killer, it exudes dynamism and elegance whilst still staying true to the British styling that produced legends in the past. Behind the long, E-Type inspired bonnet lies the driver’s heaven – a compact cockpit, built around the driver, for an optimum driving experience. The canopy or, as Jaguar calls it, “the glasshouse”, (an optional feature), can further contribute to the feeling of openness and space whilst behind the wheel.

Perhaps the most thrilling sports car to come from Jaguar in recent years, the Jaguar F-Type Coupe does not disappoint on the road. Three driving programs are available to the driver, selectable at the flick of a switch – a normal mode, for regular cruising, one mode for slippery conditions, useful when driving in rain or snow and a dynamic mode, performance oriented. As opposed to its Convertible counterpart, the Coupe exhibits a notably better response in terms of handling and grip. The aluminium construction of the body may be a factor, as Jaguar takes pride in it, calling it “the model with the highest torsional ability it has ever produced”. There is a slight tendency of losing grip when faced with wet conditions, due to its heavier front section and the rear-wheel drive system, but this can be corrected by the car’s on-board computer, which compensates for it.

The F-Type is a new model and there is not an extensive amount of data to draw conclusions upon. However, Jaguar has been known to offer high quality automobiles, and that holds true with this car. As for a potential driver and owner, there shouldn’t be many concerns, keeping in mind that it is a newly developed model. Everything about the car is “fresh”, starting from the engine and finishing with the aluminium body.

Whilst the car itself is priced lower than a Porsche 911, don’t expect things to come very cheap. The optional “glasshouse”, although adding a touch of distinction to the automobile, will set you back £1,250. The high-fidelity Meridian audio system comes in at £1,700, whilst an exhaust switch (to control its sound output) will cost in the region of £350. The fuel economy is much better on the low- tier V6 model, with a fuel consumption of around 32.1 mpg, whilst the top of the line Jaguar F-Type R V8 clocks in at 25.5 mpg. However, bear in mind that the figures may not be exact, as the driving style of each one behind the wheel may have an influence on them.

A rather compact car, the Jaguar F-Type Coupe is not a model that wears the label of “luggage carrier”. Its boot space, of 407 litres, should be enough for an occasional bag. With the addition of a spare tire, the space will be further diminished, to a total of around 315 litres. Being a sports car, the fact is understandable, especially taking into consideration its dimensions, smaller than those of previous Jaguar models. However, the interior space for the driver and passenger is more than enough, as the cockpit was designed with both sportiness and comfort in mind. The roof is high enough to accommodate tall persons, whilst the legroom is more than sufficient for a car in this class.