The BMW i8 is here to change the way that you think about fuel efficiency while you’re on the road. Imagine being able to find a vehicle that had a beautiful body, an engine that roared and made you giddy when you drove it, and has great fuel economy. Now, think of most sports cars and the way that they handle on the road or in any situation you put them up to. Although most sports cars feel great and handle beautifully, it is hard to say the same about the miles per gallon that most of them get. 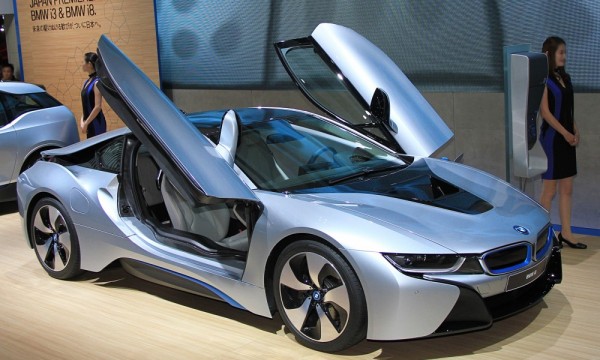 The BMW i8 features an aluminum sub frame to keep the vehicle light, while putting our over 300 horsepower by utilizing a unique system of different motors and a 3-cylinder, 1.5 liter petrol engine. The vehicle has been tested by a variety of different drivers, and currently reaches 60 miles per hour from a complete standstill in 3.8 seconds. To top this off, the BMW i8 is able to reach 100 miles per hour in 9.7 seconds, rivaling some of the top of the line sports cars that are currently on the market. This means that starting from a standstill, the BMW i8 is able to complete a half mile in just under 30 seconds, traveling at 121.1 miles per hour.

Compared to other cars that have just been released, the BMW i8 ranks in the 0 to 60 bracket along with the Camaro ZL1 and the Jaguar XJR, yet completely beats them in fuel efficiency, running at an incredible 94 miles per gallon due to the efficiency of the hybrid system of the car. Of course, BMW does hope to continue increasing this number in the future in order to continue extending the life of a single tank of petrol.

When looking for an exotic sports car that runs incredibly well, and will save you thousands on gas expenses, the BMW i8 absolutely hits the mark. BMW may not be known for most of the sports cars that they release, but this vehicle both looks and runs heads above many of the other sports cars that are in the competition. The BMW i8 looks like a supercharged vehicle, while running like a hybrid, bringing delight to sports car enthusiasts all over the world.

With the Bmw i8 model, BMW took quite a detour from its more conservative styled vehicles, adorning its hybrid coupe with an aggressive look and an imposing figure.

The sloping front section reminds us of the looks of a supercar; at the styling department, especially when discussing about sporty models, BMW has never disappointed. The doors are a spectacle all on their own, swinging up and to the front, revealing a carefully sculpted interior, with a futuristic arrangement of the controls, while four individual seats await their occupants. The sleek lines of the roof break when meeting the short rear section, which is a design characteristic of coupe models coming from the German manufacturer.

From the moment when the driver door is open, which is a ritual in itself, to the moment when the beast’s engine comes to life, there are no compromises made for the Bmw i8 model. A plug-in hybrid by design, the example has an in-line 3 cylinder DOHC turbocharged engine and two electric motors, the total power output being of 357bhp. Accelerating from 0 to 62 takes a mere 4 seconds, although lesser times have been recorded. The full electric mode allows for 22 miles running on pure electricity, at decent cruise speeds, while the top speed of the vehicle is rates at around 155 mph.

The new technology implemented in the making of the car should allow for a peace of mind, but definite answers cannot be yet given. BMW offers a warranty of 8 years or 100.000 for the electric battery back, while the rest of the car’s components fall under the standard BMW 3 year warranty. However, electric motors are less prone to mechanical failures, due to their construction – they have far less moving parts. The carbon fibre exterior, characteristic to super sports cars, will have no issues in withstanding any weather conditions, while the 3 cylinder engine, having been in the BMW family for quite some time, has proven its worth.

Assuming you were able to pay the hefty price tag, running costs should not pose too many problems. BMW rates the Bmw i8 at 135 mpg on paper, but expect a little less in real life, as driving style and on-road conditions may have an influence on the figures. Being a plug-in hybrid means that you can use a charging station to charge its batteries and thus save some fuel.

From the start, the hybrid construction of the vehicle should count as an advantage, as there aren’t many sport cars that can boast a similar configuration. The interior space should suffice the needs of four occupants, but the passengers in the back might feel a bit cramped, as there is limited leg room. The compact rear end, however, does not offer much storage space, save for a couple of bags, but not for large luggage. The fast charging times of the batteries are a definite advantage, as they allow you to travel somewhere even if low on gas, which is a welcome asset.