The latest Scirocco to grace our eyes this year is dubbed by Volkswagen itself, the New Scirocco. The strange naming convention started with another model, the Beetle, whose 2014 edition received the same treatment, in order to differentiate itself from the older model. Why did they do that? We don’t know, but then, they also made the Passat CC, which is not a coupe-cabrio, but a saloon. “If anyone does know we’d be happy to hear your thoughts”. 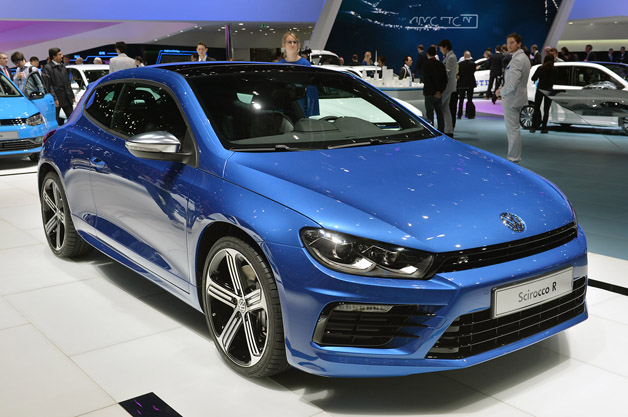 Passion on, we can observe a few changes that have taken place on the exterior of the car. The overall profile has been kept and, although it looks like a hatchback to us, VW insists that it’s a coupe. The front of the car has been refreshed, as the thin grille has received a small makeover. Below, the air intake in the front bumper is separate from the fog lamps and more in line with that we get in the VW Golf. The headlamps have also received a new lease of life, as they are now bi-xenon and look very stylish. The bonnet has remained largely the same, with the exception of the fact that the ridges above the headlights are slightly more profiled than on the older model. The sides offer nothing worth mentioning, as the same lines that graced the previous model are also present here. Round the back, the tail light design has been altered, along with the bumper, which received some air vents (only on the R model) – only decorative, unfortunately – and a set of twin sport exhausts on the left side. Just like in the new Golf, the mechanism for opening the tailgate has been incorporated into the VW badge at the rear – a nice addition, which we appreciate.

Built on the Golf platform, the Scirocco shares most of its mechanical underpinnings with its sibling, except for the rear axle, which comes from a Passat. This makes the car stand out even more, as the second portion of the vehicle is considerably wider than its front. 17 inch wheels will come as a standard option on every car, but buyers are able to order 18 and even 19 inch variants, according to their taste, including the ones from the top-of-the-line R model.

3 new petrol engines are available and all include Blue Motion Technology, meaning that you get a start/stop system and brake energy recuperation, thus slightly cutting your daily driving costs. A 1.4 litre TSI 125 bhp with a 6-speed manual is the base offer, at £20,445; the other choice is a 2.0 litre 180 bhp engine, with either a 6-speed manual or automatic, with the respective prices being £22,495 and £23,995, for the DSG version. The Diesel offer consists of only a 2.0 litre engine, with a total power output of 150 bhp, with either a manual (£23,175) or an automatic gearbox (£24,675).

For the Scirocco R, the most performance oriented version in the range, you’ll have to shell out no less than £32,295 for the 2.0 litre manual and £33,795 for the DSG version. Both come with the same petrol engine that develops 276 bhp and boasts a 0 to 62 time of 5.5 seconds.

Although the designers have not included major changes in the facelift of the Scirocco, which, although good looking, lags behind some of the competitors in its class, due to its subdued styling.

In the cabin, most parts come from the Golf, with the exception of a few details, such as the three gauges on top of the dash – oil temperature, turbocharger boost and a stopwatch, a hint at Scirocco’s sporty DNA. The materials inside feel pleasant to the touch and the leather seats are just exceptional regarding the lateral support they offer. In the rear, the windows get privacy glass, which helps create an almost intimate atmosphere, but beware of the restricted space, which might make some people feel uncomfortable.

As expected, the Scirocco did not disappoint when it came to its on-road behaviour – the precise steering was very light and provided very good feed-back. The multi-link suspension does its job very good on the base model with the 17 inch wheels, filtering most of the bumps in the road, but the R model, fitted with the 19 inch alloys felt too stiff, as the excursion of the dampers was reduced and the ride felt more rigid than we would have liked it to be. Compared to the Golf –and especially the GTI model, the car seems to lag behind in terms of driver satisfaction and overall comfort, but it washes away its sins when it comes to the feeling it provides to the one behind the wheel when it comes to rolling at high speeds.

The Golf platform has been one that has always returned high reliability and few mechanical flaws throughout the years. Being built with mostly the same insides as the Mk 7 Golf, the Scirocco has not stranded away from the roots and fully complies with the tradition. The performance and the handling of the car were features that stood out, as well as its suspension system. The largest amounts of complaints came from its lack of practicality – small boot space, insufficient headroom and a feeling of claustrophobia on the back seats – mainly because of the small windows with tinted glass, which don’t let that much light inside.

Apart from the price, which starts at £20,445 for the basic model and £33,795 for the DSG Scirocco R, there won’t be too many things that will make you fork out cash on a daily basis. The diesel engine still takes the crown when it comes to economy, as the 150 bhp 2.0 litre one achieves 67.3 mpg, combined cycle and, due to the low emissions, gets a road tax of only £20-30 per year. Quite a deal! All models, irrespective of trim, are Euro 6 compliant, have side and curtain airbags, and VW says that all the metal parts in the car have been laser welded, thus greatly increasing the car’s rigidity. Moreover, the vehicle scored a full 5 star rating at Euro NCAP, so safety will not be an issue.

The car comes with 2 doors, which means the passengers in the back will have to fold the front seat and squeeze inside. Although the legroom is sufficient, allowing for long drives, the sloping roofline means that tall people will have a bit of a problem, as they’ll probably be scraping the ceiling with their heads. The boot space is rated at 292 litres, but it can expand to over 1,200 litres with the seats folded down.

Need to know more about the new VW Scirocco? If so, click here.