Without a question, the Mercedes SLS AMG has been one of the most beautiful cars in recent history to come from the German manufacturer. Carrying on the motorsport heritage of the legendary Silver Arrows, the slender automobile is unlike any other on the road.

In fact, it is the first model designed and built by AMG, a premiere for Mercedes. Visually, the Mercedes SLS AMG is reminiscent of the SL300 Gullwing, a legendary model that is respected to this day for its performance and aesthetics. The same type of doors that adorned the SL found their place in the slender SLS and opening them is as much a pleasure as it is a ritual, leaving a powerful impression on the persons to witness this rather majestic spectacle.

The front of the car looks like it’s engaged in a constant grin, as its immense grille spans the entire width of the fascia, with only the slender, back swept headlamps flanking it. Smack in the middle, a horizontal slit encases the giant Mercedes emblem. On the sides, a few more air intakes, added for effect – and a subtle lower lip create a stunningly aggressive visual effect.

The long bonnet, taking nearly two thirds of the car, has arisen numerous phallic associations, resembling the same rear cab design as the infamous Mercedes McLaren SLR. Close to the point of meeting the windscreen, two air extractors sit on either side of the power ridge, with two claw-like matte chrome decorations, mirrored on the sides of the car, but vertically oriented and much larger in size.

The side, as mentioned, is long and sleek, with the cabin residing in the latter part of the vehicle, a characteristic shared with the SL300. An inscription, housed between the two horizontal metallic slits covering the side air vent, reads 6.3 and refers to the displacement of the engine. The gullwing doors remain the main attraction – operated by compressed gas when opening, they allow for easy access in the cabin. The closing mechanism is manual, however, as an automatic mode would have added excess weight, aspect that was deemed avoidable by the specialists of AMG. 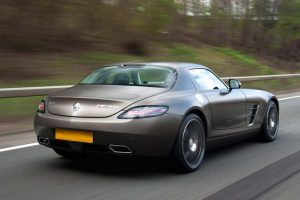 The vehicle, over the span of its four year existence (2010-2014), had multiple incarnations: first as the standard 563 horsepower SLS AMG, then as the 583bhp SLS AMG GT, then, ultimately, in its last form, as the 622bhp SLS AMG Black Series, which added a host of carbon fiber elements, resulting in a 70kg drop in overall weight, as well as a more menacing, wide body kit.

A convertible was also part of the line-up. Bearing the name of SLS AMG Roadster, it traded the gullwings for a fabric soft top and a conventional set of doors.

The Mercedes SLS AMG Coupe Electric drive was a version running on pure electricity. Introduced in 2013, it was called the most powerful AMG ever produced, with over 751 horsepower available. 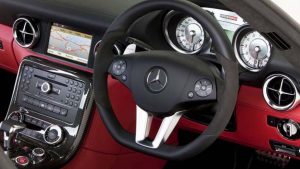 The cockpit is rather compact, as headroom is a bit tight in the car, especially if you’re tall. Sitting behind the flat-bottomed leather steering wheel, the instrument cluster looks carefully thought out, as both the tachometer and speedometer have a stylish metallic rim. The centre console flows from the dash, creating a tunnel between the driver and passenger.

Both aluminium and carbon fiber were offered as choices for inserts, but AMG was always open to personalization. The dials were criticised for appearing too cheap for the price of the car, as well as the overall style of the interior, which differentiated itself too little from the typical Mercedes layout. 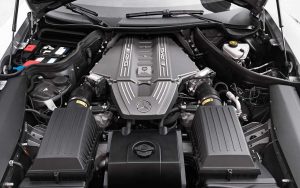 Although potent, the standard (non-Black Series) Mercedes SLS AMG resembled more a grand tourer than a supercar, as it was lazier than its main competitors, among the much lauded Ferrari 458. Don’t get us wrong – the time from 0 to 62 took a mere 3.9 seconds – but the weight of the car and it’s rear cab design made it a bit difficult to compete with the wedge shaped supercars.

The big V8, revving up to 7,500 RPM, was the same unit used by the C63 AMG, but with an added 112 horsepower, which made all the difference. Both a road and a track toy, the stiff chassis of the car made it perfect for both straight line performance and tyre smoking sessions, as the rear was relatively easy to drift in corners. On the road, the regular SLS felt rather inflexible, unlike the Roadster, which was mellower, but then again, the latter was also heavier and it lacked the rigidity of a coupe. 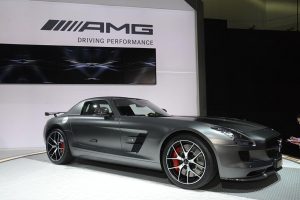 The Mercedes SLS AMG has been deemed as a highly reliable vehicle, with faults few and far between. Owners have lauded the engine, the low, grumbling noise of the exhaust and the automatic gearbox left in auto mode. Shifting it to manual, however, was not the most exciting experience, as gearshifts took longer to respond than in a 458, for example. A notable fact, for owners or seekers of SLS AMG’s is that the car tends to depreciate rapidly. A 2011 example can be found at bargain prices (for a supercar, that is), rivalling other discontinued vehicles that may as well be regarded as more desirable – a 599 GTO or a 575, although lacking the wow factor of the doors might represent better choices. 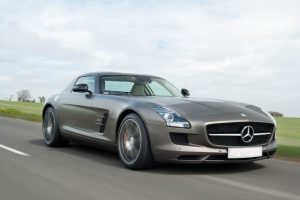 Offered in only black and silver at launch, additional colours, as well as any other optionals, such as different wheels, would quickly add up to the final cost, in a similar manner with Porsche’s strategy that employs the same technique.

Regarding fuel economy, the SLS returned about 21.4 mpg, but real road tests showed an average of 19.1mpg. However – and there is a however, should you take it to track, expect an even smaller figure and don’t be surprised either. 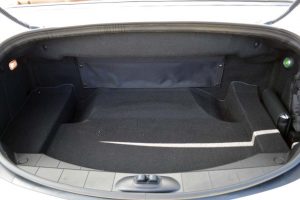 Much like any other self-respecting supercar, the Mercedes SLS AMG didn’t offer much practicality. Let’s start with the doors: as spectacular as they may be, the fact that they didn’t automatically close meant that the person entering would have to pull the handle and perform this operation. However, if the person in question was short, it meant that he or she had to stand up and pull the door or close it while entering the car – not very delicate, we know.

Another issue was that the wide door sill meant that whoever wanted to enter was forced to slide over it and in the meantime watch its head, as the doors would smack him/her silly, quickly leading to a headache. Thanks, Mercedes! I mean, AMG!

Boot space was limited to about 176 litres, enough to hold a large bag, at best, eliminating any plans for any sort of long getaway, but everything paled and faded away when you watched the doors open…

Thirsty for more information on the Mercedes SLS AMG? Take a look here.